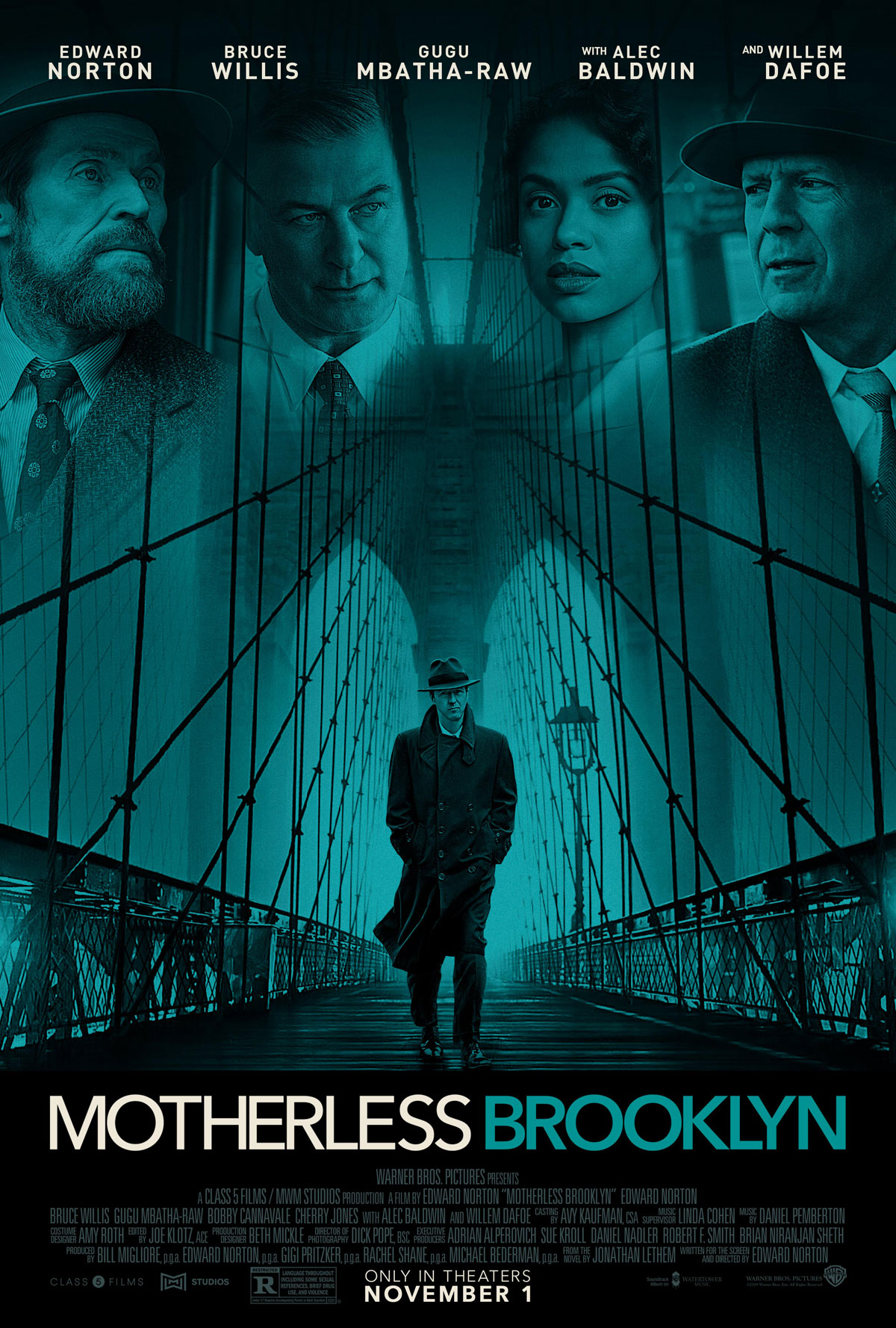 So, I wrote a review of Motherless Brooklyn back in 2007. Or so my janky website tells me. It could have actually happened years before, but I converted the site from a hand-coded thing to a real CMS at some juncture and a lot of the publishing dates were lost to time. That aside, even back then I mentioned that Ed Norton had optioned the novel and was planning to make it into a movie. That was obviously around thirteen years before the film actually made its way to screens. And twenty years after the book was published in 1999. To say the material was fresh would not be an accurate statement. To say the novel and the movie have anything to do with one another would also not be accurate.

It makes you wonder, then, why Norton was so in love with the novel in the first place. If he was only going to take the title, the main character and the inciting incident and then totally change everything else, why spend nearly two decades trying to bring it to the screen? And why insist on playing a character, who is so obviously supposed to be much younger than Norton in 2019, when he knows it makes absolutely no sense. That character, Lionel Essrog, is supposed to be around 33 (his Jesus year, duh), which would have aligned with Norton’s age back in the couple years after the novel’s publishing, but at 50 in 2019, his involvement is nonsense.

Along with changing the plot of the novel, Norton changed the timeframe from modern-day Brooklyn to post-WWII, 1950s Brooklyn. I imagine he felt the noir-ish private dick nature of it fit the era, but it changed a lot of the nature of the disorder at the center of Lionel’s world. Because, part of the conceit is that Lionel has Tourette’s syndrome. Which, in 1999, is something that I think most people were aware of. If you saw someone ticking, most folks — especially around NYC — could identify what was going on. But in the early 50s, that wasn’t the case. So Lionel literally has to explain his affliction to someone in each and every scene. And it gets super-tiring. It’s also not a great thing for a person who is supposed to be keeping a low profile to have. Even if the side effect seems to be a photographic memory. Whatever.

So Lionel is part of this crew of dudes who are one part car service and one part detective agency. Which basically means that they follow around cheaters and crooks and take pictures. The head of their crew — and de facto father figure — is Frank Minna (Bruce Willis). Because, as we learn, Lionel was rescued by Frank from a Catholic boys home when he was a kid because Frank saw something in him. This is probably where I point out that Willis is only 15 years older than Norton. Which speaks to that whole thing of Ed being too old for this part. What is also affected here — since he’s way older than he should be – is the explanation of his upbringing in that home. Because why would you talk about that when he’s apparently been hanging out with Frank for forty years?

Pretty early on Frank is murdered. And it becomes Lionel’s obsession to find out who killed him and why. Willis’ acting is… subpar. But rather than really focus on why this man meant so much to Lionel and his “broken” brain and loneliness as an orphan and why he’ll go to the ends of the earth to avenge the man who he loved, we get into this whole convoluted plot about power and politics and class. For almost two and a half hours. Which, bizarrely, includes a scene in a jazz club in Harlem where we get to hear what feels like almost two entire jazz tunes that aren’t Miles Davis. And don’t serve to fill any purpose other than Norton was maybe pitching his music video bona fides? Or, more likely, loves jazz? Some editor somewhere needs to have his card revoked.

Also, pretending to have Tourette’s is tough. I imagine writing a script with a character with Tourette’s who is on screen pretty much the entire time is also tough. How much should he vocalize? When do you need him not to vocalize when there is a big info dump (of which there are many)? How do you do it without being disrespectful or coming off as almost silly? Turns out, it’s almost impossible. Norton is a decent actor, but even he is clearly an actor acting like he has a disorder. It’s not quite to the level of actor’s doing the mentally disabled thing (never to be bested by Leo in What’s Eating Gilbert Grape), but it never rises above a gimmick on screen (while it felt way more natural in novel form).

Ultimately, the movie is so clearly aiming for Chinatown here both in terms of environment, plot, scope. But it comes up way short. I know they wanted Alec Baldwin to work as the heavy, but he really comes off as, well, Alec Baldwin. And, god, I love Willem Dafoe, but his wild-eyed character is over-the-top and just plain silly. Gugu Mbatha-Raw is not the strongest actor in the world, but she definitely jumps off the screen. It’s completely unclear why her character, or she, would go for Lionel. Not only is she completely out of his league, their relationship just feels awkward and odd. And that kind of sums up the film. It’s fine (but strange) that Norton changed it so much from the source material, but in doing so he undermined the heart of the thing and ended up making it into an awkward mess of a film that doesn’t know what it wants to be.