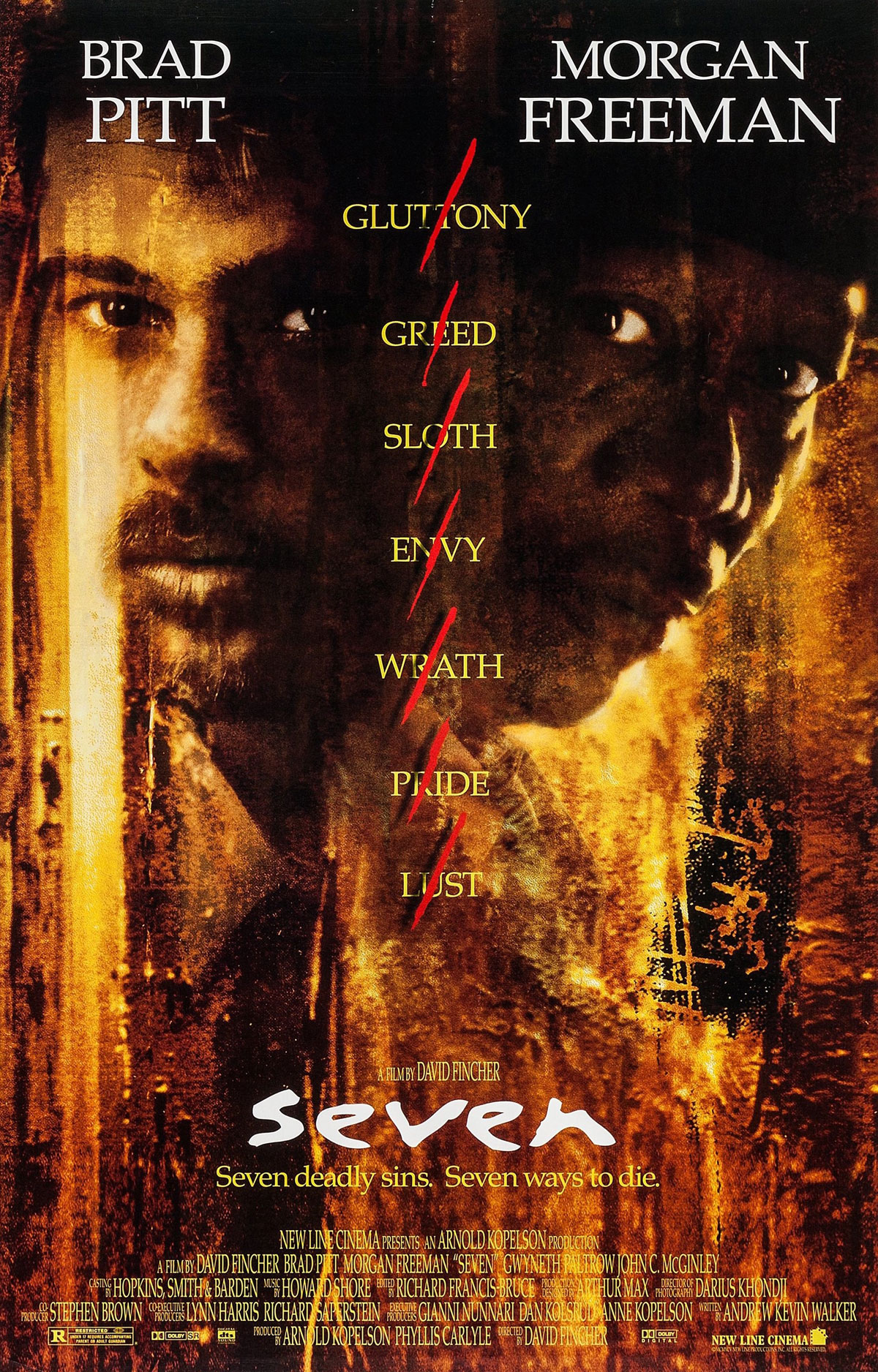 Hot damn things were crazy back in 1995. This movie — this dark-as-shit movie — made $327 million. Which would be about $560 million in 2020 dollars. That’s a blockbuster, folks. Which is weird considering its theme of gruesome murders based on religion and the esoteric writings of seventeenth-century English poets. Or maybe it was just people coming for the Brad Pitt sexy and staying for the Morgan Freeman gravitas. Whatever the case, this is the one that launched two decades of David Fincher directorial glory. And, yes, I’m intentionally ignoring his debut, Alien3, because the world has also chosen to pretend that film never existed. Funny, though, as I actually saw that one in the theater, but didn’t see Se7en until it came out on VHS.

And, boy, did the world eat it up. It was kind of punk rock. Its was a horror movie without the horror. It was a mystery movie without a whole lot of mystery. It was intellectual (because it mentioned a bunch of old books) without being particularly intellectual. It was the the edgier version of The Silence of the Lambs fans had been waiting for. But way more butch. Somehow more violent and shocking. It fulfilled this weird itch that grunge once scratched. It kind of came to the fore when the top ten movies were shiny, feel-good fare like Toy Story, Jumanji and even Braveheart. It felt subversive and creepy in a new way. Something revelatory, but also familiar.

The plot here is pretty basic. Old cop is on the verge of retiring. He’s paired with a hotshot, newbie from out of town who he’s supposed to train in the last week or so of his service. The hotshot, Mills, it turns out is not so hot. I mean, maybe he was when hillbillies were stabbing each other over grain alcohol, but in the big city he’s basically just a good-looking hick. It’s funny, actually, how they really kind of make Pitt’s character a dummy. Sure, he’s eager and earnest and stuff, but he’s just kind of a clueless lunkhead when it comes down to it. His affectation of ending every sentence with a “Yeah?” is either a manifestation of this slowness or just some weird choice that Pitt decided to do. Odds are even either way. Anyhow, up pops this huge case right in time for these two opposites to solve it! A serial killer that uses bible verse to murder people in terrible ways based on the seven deadly sins. Thus Seven. They then spend the film arguing with each other, occasionally talking to Gwyneth Paltrow (whose job in this film is to basically be a skinny, blonde prop), looking at dead bodies and poking around the library. That’s it.

This unnamed city in which the action takes place that looks a lot like a NYC/LA mashup, but rains like Seattle gives the film a strange pall. Everything is always wet and drippy. Every house or apartment the officers walk into is dark, even during the light of day. Seriously, there is not a single murder victim in this movie who’s paid his electrical bill (save the one rich guy). Half the film is shot by flashlight. It’s like an extended episode of The X-Files. Which, yes, between the rain and the dim lighting gives the thing that creepy-ass noir-ish Blade Runner feel. And, honestly, that’s the real appeal of the film. The acting is uneven. I mean Freeman is great, but Pitt is a total wildcard from scene to scene and Paltrow is absorbing to look at, but her performance has the weight of a plastic bag in a light breeze. Her role is part wet blanket, part punchline. The plot is pretty nonsensical, freshman year philosophy class stuff. The ultimate baddie is a bit of a rip-off of Hannibal Lecter if you ask me. Though I guess most bad guys in psychological thrillers are based on Hannibal after he made that archetype so popular.

What remains, of course, is the whole look of the thing. And I think that’s where our man David Fincher comes in. He took an ‘eh’ script, some patchy acting and a faux-cerebral script that left something to be desired and made a cool fucking movie out of it. That’s some talent right there. He tapped into something with his visual style, his intricate crafting of scenes and his imagination. As a perfect example of what he brought to the film, the same guy who wrote Seven also wrote 8MM. That film is arguably similar to this one, has the same writer and is thematically of a piece. But that movie was directed by one of the worst big Hollywood directors of all time: Joel Schumacher. That movie currently has some of the lowest ratings of any I’ve ever seen. It’s a trainwreck. So, the visuals. And the ending, of course. One of the most famous endings in modern movie history. Pitt walks right up to the line of ruining it, but somehow his Brad-ness works in an absurd way.