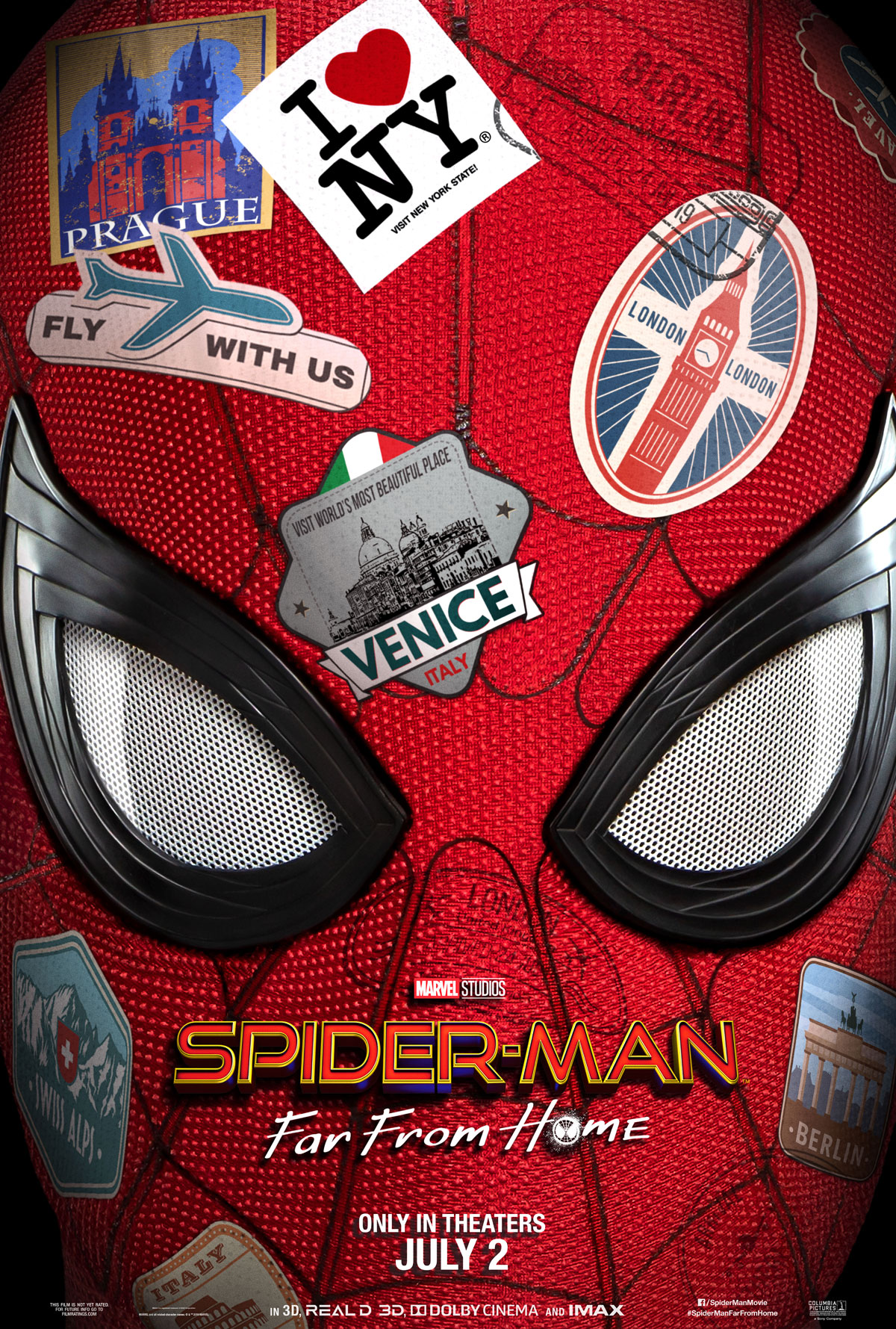 Why? Why! Why do I keep watching these movies? Because I love Hipster Jr. Jr. and my movie watching life has become slightly less important to me as a result. It’s not even as though she begs to go watch all of these superhero films, but it seems to be the one genre on which we can both agree. She doesn’t love subtitles and I don’t think I’m allowed to bring her to something like the upcoming Tarantino movie. She hasn’t even seen Pulp Fiction for god’s sake. Though she is only ten.

This brings us to Spider-Man: Far From Home. I know she’s seen all of the Marvel Universe movies and most, if not all of the X-Men films (save Logan and that last Dark Phoenix train wreck), but I’m not sure which of the Spider-Man boots and reboots she’s seen. I know she saw the last one, but am not certain if she even knows Tobey Maguire or Andrew Garfield exist. And that’s fine. Because beyond everything else, Tom Holland makes for a really good Spider-Man. He’s charismatic and humble and seems age-appropriate (despite actually being like twenty three). As far as she’s concerned there never has been and never will be another man to don the blue and red spandex.

As far as characters go, Spider-Man is the most relatable for kids. After all, he’s a high-school student with dorky friends, a chaste crush on a girl and isn’t from space or another universe or anything. He was just in the wrong place at the wrong time and got bitten by a spider. It could happen to anybody, right? So now that we’re past the whole origin story and have seen Peter Parker in all these Avengers movies, it’s time to get the kid abroad. Which was a weird choice, but I guess another film shot in NYC would feel like a rehash. So rather than have a giant baddie destroy the Chrysler Building for the four-thousandth time, we can watch it blow up the London Bridge or some clock tower in Venice. After all, they have templates from sequels past to base it on, like European Vacation, The Bad News Bears Go to Japan and the always classic fifth movie in the Die Hard franchise, A Good Day to Die Hard. In other words, it’s always a risk to move things from the familiar to the unfamiliar environs of a foreign locale.

But the creators of the film avoided some of those risks by changing not much other than the scenery. The group of teens is pretty insular. Peter doesn’t fall in love with an Italian girl. He only has eyes for his classmate, MJ (Zendaya). And his best bud, Ned, falls for a girl from their school on the plane trip over. Even his nemesis on the trip isn’t some Mediterranean Lothario, but just another douchebag teen from his trip named Brad. Paired with the fact the only adults we deal with are the super-American teacher/comic-relief duo of Martin Starr and J.B. Smoove, it feels like the whole thing could have happened on a class trip to Albany. But, again, it’s cooler to watch some monster rise out of a Venice canal than knocking down a state capitol building in the middle of New York state.

Even the introduction of Quentin Beck / Mysterio (Gyllenhaal) felt remarkably American. You’d think if they took the kids all the way to Europe that they’d at least get a guy with an accent to be the new mysterious superhero. Or whatever he turns out to be (in order to not spoil that). But I’ll get off that. It was a choice. What was also a choice is how the Big Bad manifests. They tie in its appearance with Tony Stark’s passing of the torch to Peter in a very tortured way. They definitely have to do a little inventive history and backbends to make the tie obvious and to connect the dots. Even the main bad-guy’s motivation for killing multitudes of people feels questionable. I know it’s a comic book trope that geniuses go from brilliant scientists to homicidal maniacs because of some perceived slight, but this one felt just a leap too far.

That all said, this is a very entertaining movie. It’s mostly due to the cast and their interactions. Zendaya in particular is really good. Hipster Jr. Jr. was a fan of the Disney Channel show, K.C. Undercover, so I’ve seen that more times than I care to admit. And she was fine on that show, but her charisma and acting chops are on display here. Not like Oscar-worthy stuff, but she definitely shows why she’s a rising star and is going to be for some time. Again, Tom Holland is also a perfect Spider-Man. Says the guy who doesn’t know or care about these things. But he seems great to me. The supporting cast of teens and adults are decent background actors and fill in the spaces well. Gyllenhaal is uneven. It’s unclear what exactly is going on with his character for a good deal of the movie, and when we do find out what’s up, it doesn’t really make his acting any better. We know he’s decent at this, though, so I think the fault sits with the writers who didn’t quite get at the character’s true motivation. His character is all kinds of silly.

I can’t say that I won’t be writing another one of these reviews in a few years when Spider-Man: NY State of Mind comes out. But until then I’ll enjoy the lull in the Marvel Universe and maybe go watch one of the twelve movies Holland will be starring in in 2020 or checkout the Zendaya vehicle, Euphoria.