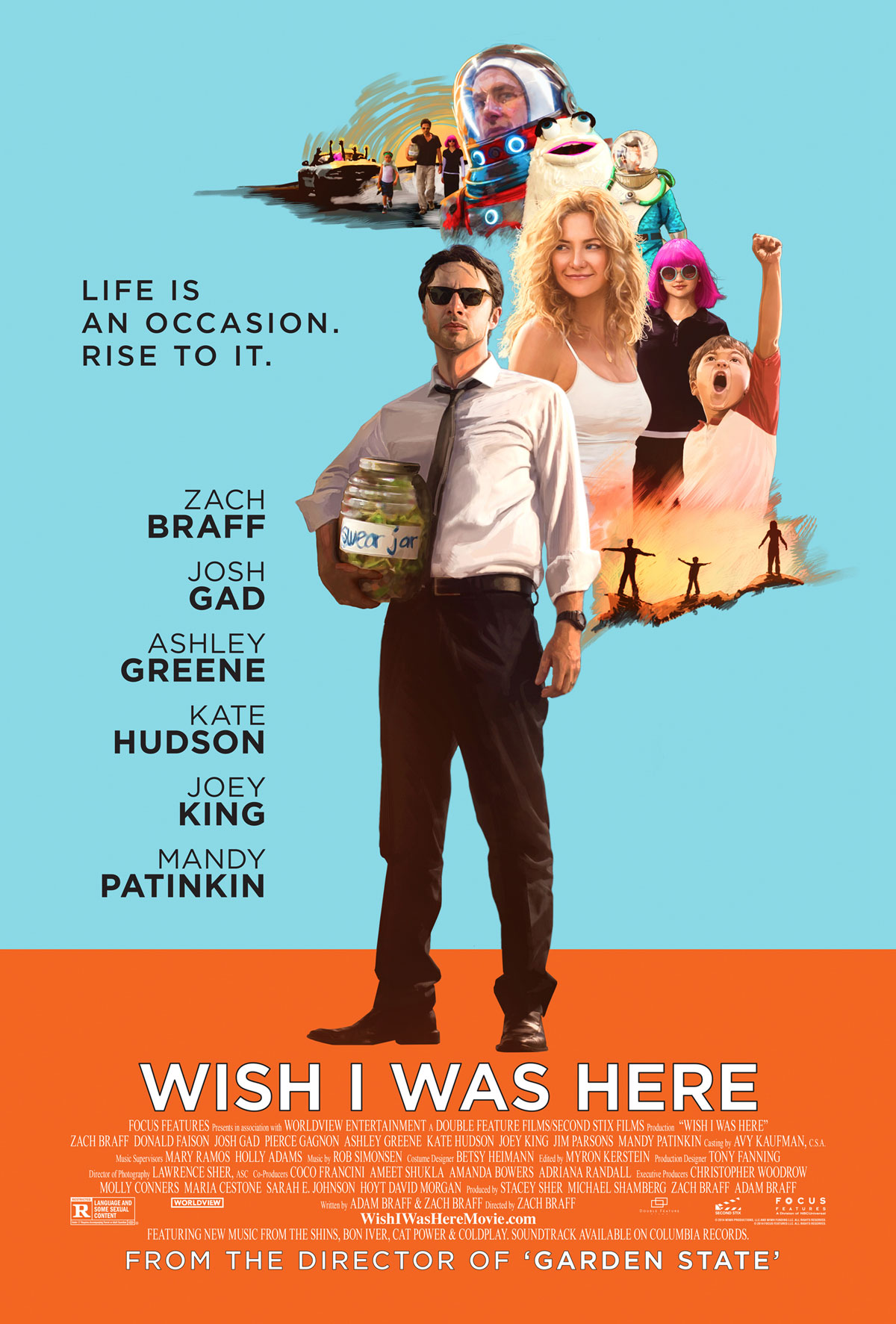 Wish I Was Here

This is a movie that feels eerily similar to Garden State. I’m not sure why… Oh, wait, I totally know why! It’s a Zach Braff joint — the second Zach Braff joint, once again about a slightly nebbishy guy who can’t get his shit together. But this time he’s got kids and a half-Jewish wife (instead of the presumably full-Jew Natalie Portman). Once again punching above his weight with Kate Hudson as his blonde counterpart who reminds us she can be pretty and pretty charming when put in a role that isn’t shrill and weird. Or with Matthew McConaughey. Playing Braff’s dad is an always engaging Mandy Patinkin, who it’s good to see in a semi-lighter role (though he and his beard always bring the gravitas theses days) after suffering through the leaden Saul Berenson on Homeland for the past few years. And then there’s Josh Gad as Braff’s struggling younger brother, who is some sort of mixture of dumbass, genius and nerdy Rain Man. It’s not clear which is the greatest of the personalities there, but the guy is always infinitely watchable, if not a little annoying at times.

So, if I recall, Braff plays an actor in Garden State. Here, he’s an… actor. Yes, very far-fetched. And what kind of actor would our weak-chinned, hangdog star be but a struggling actor. The same way writers always write themselves as struggling writers and athletes as struggling athletes. The ironic thing is, I still find it hard to buy Braff as an actor. I mean, I know he’s an actor for realz, but it seems almost weird having him playing an actor, as he should be like an account guy at an agency or a like some dude who sits in an office in a tie and you have no idea what he does. But not really an actor. That said, he doesn’t seem to be a very good actor, and like many floaty people in LA, he is less of an actor and more of a stay-at-home mope. So when the money dries up to send his two kids to the fancy Jewish day school because his father has to pull funding to pay for some experimental cancer treatment, he decides — in a pretty darn unrealistic twist — to homeschool them. People just don’t do that unless they have Jesus riding shotgun every morning or live in some type of bunker situation in a state that begins with an ‘I’ or an ‘O.’

So in between his constant cussing and mostly failed attempts to be a teacher he learns to connect with his children. He learns to listen to his wife and starts the mourning process for his dad. These scenes seem to be mostly shown in either incongruous fantasy scenes with Braff running through a forest looking like The Great Gazoo (because that’s the kind of movie hero he wanted to play?) or wordless scenes with hipster music playing behind them. It’s exactly what you’d expect from him: really nice looking scenes of people doing heart-felt stuff while heart-felt music plays and leaves you with a feeling that something heart-felt has happened. And that, my friends, is why people watch this guy. That said, when he’s engaged and dialogue is going on, the film does what it’s supposed to. Yes, it’s a bit writerly and heavy-handed, but it somehow works in a Gen X kind of way I recognize. But there are too many Ferris Bueller Chicago Art Institute moments where characters arbitrarily stand on things or stare at things or walk in lines or balance on one foot or whatever while somber music plays in the background. Granted, he’s decent at conveying those scenes, but after the second or third I started to tune out a bit — and this is not at all a short movie, so there are quite a few.

Ultimately we laugh, we cry, we do all of the things that one is supposed to do while watching a movie, but at times feels a little bit to Braffian for its own good.