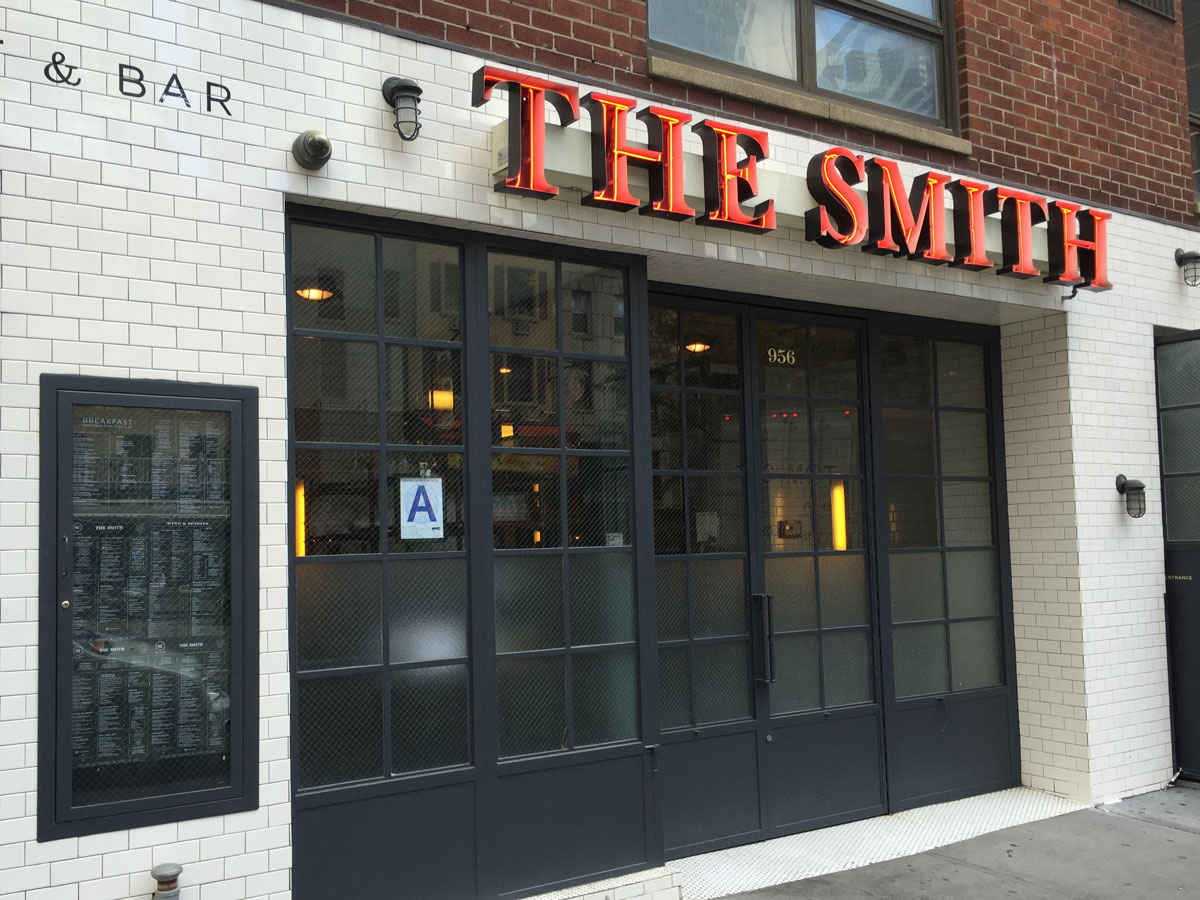 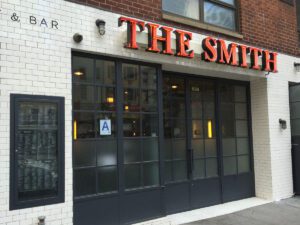 The Smith certainly didn’t try too hard in the naming category. Especially considering there are four locations in NYC, including the East Village location which I definitely went to and kind of sort of remember after reading my own review. I supposed you’d call them American bistros; big, loud joints that would be serving French food if they weren’t so dedicated to serving American grub — or what new American food has become after it’s been put through the French filter.

But, really, people go to these restaurants more for the atmosphere than they do for the food. In fact, I’m not even certain I ate anything here. We definitely did hang out at the bar, however, drinking well-mixed $14.50 cocktails and drinking some craft beers from their list of about seven on tap. The style of the interior is, well, very much like the exterior. Hex-tiled floors and white, subway-tiled walls with darker grout. It literally looks just like my and Ms. Hipster’s remodeled 1912 bathroom, with very similar acoustics. Seriously, it’s like boozin’ it up inside a shower room. Granted, the crowd is mostly twenty-somethings who tend to talk a lot and at very high volume and don’t know they’re being as loud as they are. Or just generally large groups of ladies shouting at one another over the shouts of the guys in the casual sport jackets who made their way over from Sixth Ave.

Sitting at those kind of uncomfortable wooden bistro chairs, one can see why this place is popular (especially now that its doppelgänger Schiller’s is kaput). It has that New York energy that is relatively unique to the city and its young inhabitants. There’s lots of Instagramming of food and probably way too much discussion about whatever is streaming on all of the cord cutters’ phones. The menu is hearty and familiar, filled with things like oysters, salads, some fish and several different types of steaks. The appetizers, like many of these places, are meant to warm your insides and up your cholesterol levels. But, again, the draw here is less about the grub and more about the sum total of the place. The loudness and the “fun” and the camaraderie that restaurants like this engender. If you have a headache, don’t come here. If you’re not into crowdsourced bathroom escapades, you’re probably better off at somewhere more dour. But, if dining in psychic conjunction with your fellow New Yorkers strikes your fancy, grab a cocktail, grab a chunk of cow flesh and sit your ass down at the most boringly named joint that belies its actualness.