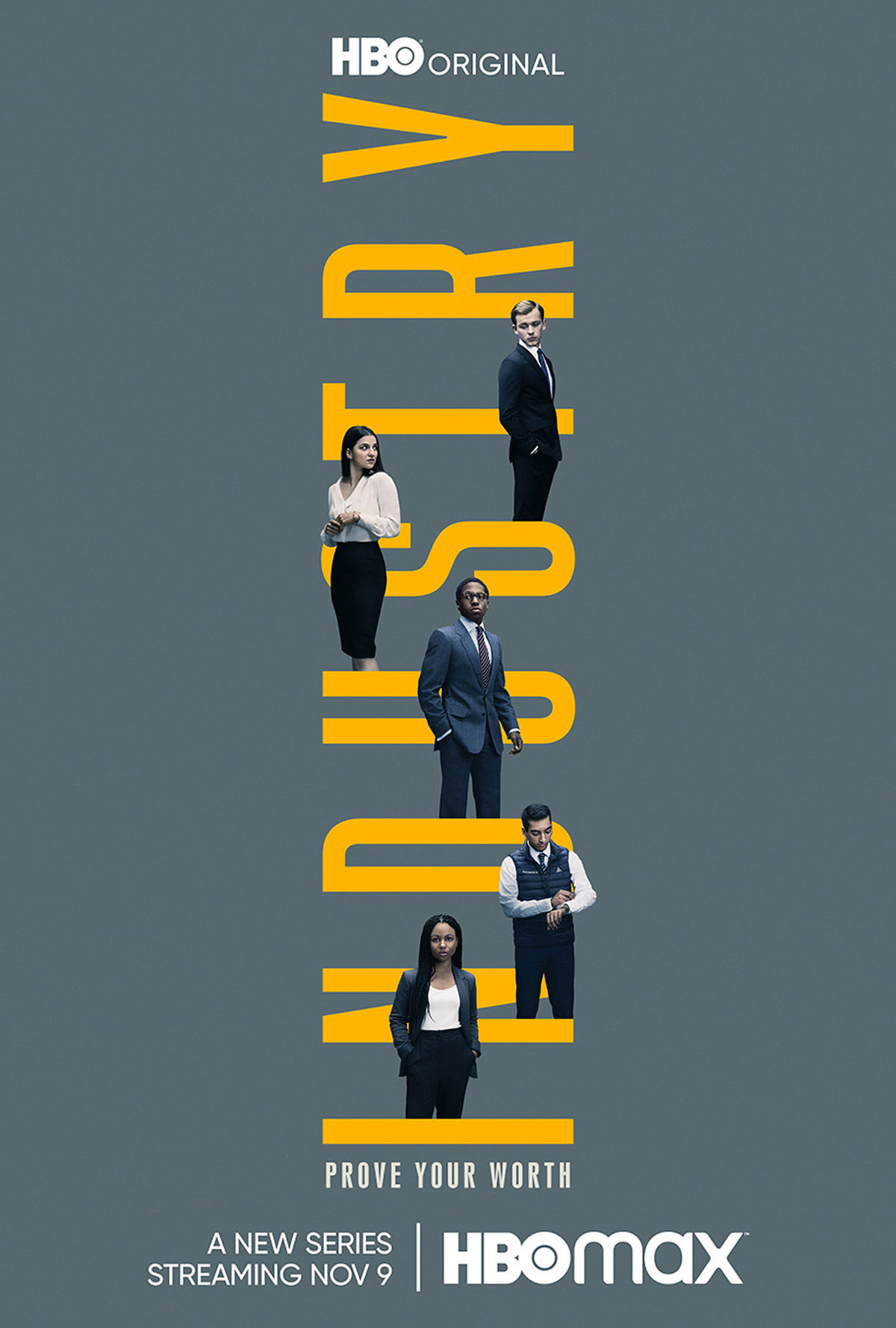 I watched Ms. Hipster work in finance for years. They even filmed scenes in Wall Street: Money Never Sleeps in her office. I understood about 3% of what was going on. Both with her work. And with that movie. And now I get to watch Industry, a series that takes place is a very similar-looking office in the same industry, but with heavy British accents. Meaning, I understood exactly 1.5% of what was going on. Oh, I understood the drinking, drugging and sexing just fine. But I don’t know my put from my hold. Or a bond from a yield. See?

But it seems that ultimately you don’t need to really get the finance stuff to get the show. As a side effect, all the stress that Ms. Hipster was experiencing watching it kind of washed over me. After all, the narrative sets up the situation this way: a group of young probationary professionals at a London trading firm get to prove their mettle, as they hurdle toward RIF. RIF being “reduction in force.” Which is the equivalent of being cut from the varsity team after tryouts. Some people make the team, some don’t. So the season is framed between the hiring of this new group of plebes and the day they are either cut or not.

So within that framework, we get to see these youngsters snort, swallow and smoke all sorts of drugs. And sleep with each other. And others. And witness their bosses harass, also snort and essentially act like monsters on and off. As the group try to make their mark on the firm by working hard, while also playing hard. There are office politics, sexual politics and interpersonal politics to navigate. Which means backstabbing, manipulation, social climbing and all the tenants of a toxic workplace that values aggression and money over everything else.

I think I’ve mentioned that I’m a little bit of a prude when it comes to my TV watching. I don’t need graphic sex scenes. My 14-year-old, Cinemax-watching self is yelling at me right now, but that stuff just doesn’t hold much interest for me these days. Mainly it seems exploitative and gratuitous. Heavy recreational drug use also puts me off a little. Not to be judge-y, but I guess I’m judge-y. Thus my hesitance to watch this series to begin with. Because it’s like 85% gratuitous sex scenes and doing coke off of every surface everywhere.

Underlying the sex and drugs, though, is some exploration of class. The one American plebe of the bunch is an African American woman who attended SUNY Stony Brook named Harper Stern (Myha’la Herrold). A pedigree that would typically not put her in the running for a gig at this firm. Even when her boss — played by the awesome Ken Leung, also a sympathetic minority American — finds out that she forged her transcript and didn’t, in fact, graduate from this inferior “state” school, she is accepted based on her demonstrated skill and not her title. Same with the very “handsome and charismatic” Robert (Harry Lawtey), who apparently has one of those British accents that means you’re low class. He’s made aware it might not suit their higher-class clients to hear someone who sounds like a lorry driver talking to them about letting go of a lot of their cash. And another character who invents an entire backstory and covers up his working-class accent with a more posh one just to be someone more palatable for the industry. Meanwhile, one dude is so Irish I can barely understand a word he says, so I’m not sure why he’s cool and the others aren’t. Maybe because they’re in a different side of the business? This is where my finance knowledge — or lack thereof — fails me.

In the end, the writers do a decent job of creating characters we feel something for. They manage to make us feel like we’re somewhat invested in their making the cut or not. But the narrative in getting there is a little too meandering, esoteric and sometimes a little too too. For instance, there’s a death of one of the youngsters early on in the series that cascades through the rest of the season. But we spent so little time with the group of characters, and the one who ends up dead, so early on that his death barely hits us and feels like more of a ham-handed plot device than a tipping point. This kind of critical event is just sudden and placed oddly timing-wise in the timeline if they were looking for more emotional and consequential impact.

From there sometimes it feels like they’re just filling in space to get to the next snorting and screwing scene. Which is honestly something I felt a little about the first season of Fleabag. Also, side note, they listen to awful, awful music in the UK. My point is, I hope that now that they’ve gotten their adolescent ya-yas out, maybe they can — like Fleabag — settle into something more adult and nuanced in season two. Now that the clock on RIF is done, I feel like it’ll give the writers more room to explore and remove that very claustrophobic box that they put themselves in in season one. I guess we’ll see.