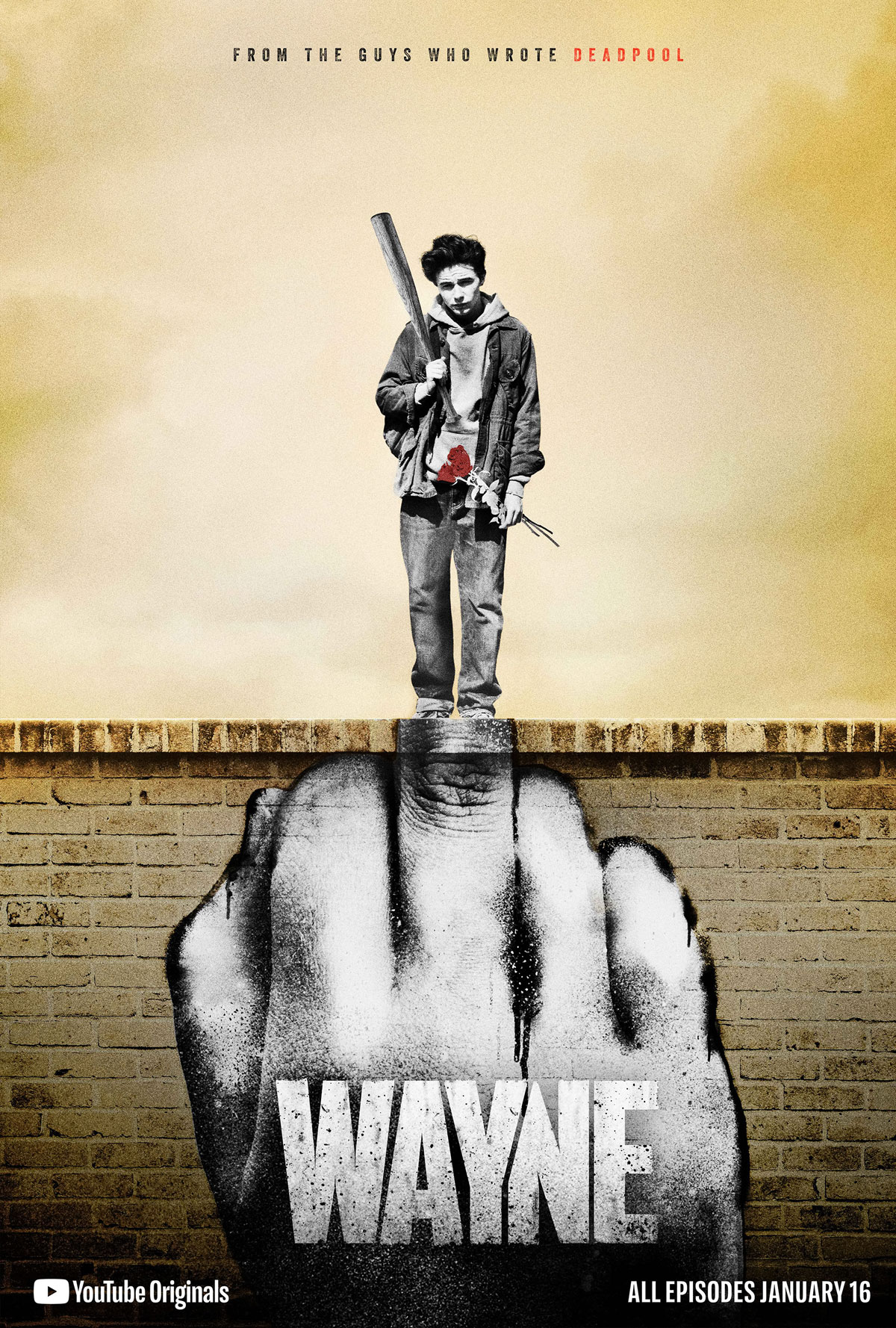 There is nothing in this world like a series on a streaming service that absolutely nobody subscribes to for its original television content. Such is the case of YouTube Premium. And such is the case of this particular series, Wayne. Of course I say all this, but Wikipedia says that 30 million people pay money for this service. Which I suppose gets you something that has nothing to do with their original programing. Because, well… It’s pretty anemic, save this show and the first couple of seasons of Cobra Kai.

I know I start a lot of these reviews by comparing the thing I’m reviewing with something else you’ve probably never seen. But I’m going to do it again here. This show is remarkably similar to another coming-of-age dark comedy, The End of the Fucking World. Granted, that one was very British, whereas this one is remarkably American. But the Bonnie and Clyde, kids-on-the-run narrative hues pretty close to one another. And the not-great home life and violence and righteousness and general over-the-top wackiness of it all.

Wayne (Mark McKenna) is one of those characters that I know I’ve seen before, but am having trouble finding an actual example of. Maybe one of the many Adam Sandler characters he plays that are scarily violent, but only against those who deserve it? Was that The Waterboy? Or like Kevin the sadist from Home Alone? Nah, neither of those are accurate. Because in any other context, Wayne would be locked up for life for the violence he enacts against bullies, assholes and general douchebags. Mostly because his violence is generally a disproportionate response to whatever injustice he perceives. An unkind word to one of his friends equals a bunch of broken teeth for the utterer of the words. A sideways, demeaning glance brings on a brutal beating with a blunt instrument. And while all the people he attacks, beats and generally fucks up are deserving of some derision, his reactions could definitely be construed by any normal person as totally psychotic.

I honestly lost count of the number of beatings Wayne takes himself. The number of cuts and bruises and broken stuff he endures. Because he’s courageous and righteous, but he’s also a really skinny kid with what seems like a death wish. His life has spiraled to the point where he has no adult supervision and nowhere to live. So he sets his mind on getting back the Trans Am he understands his mother’s current boyfriend stole from his father back when they split. The Trans Am that was supposed to be his when his dad died — which he most definitely has. Enter Del (Ciara Bravo), the cute girl from school, who lives with her drunk father and her older, idiot twin brothers. She too is fed up with her home life and is drawn to Wayne’s loyalty and propensity to protect the weak and unprotected. So she joins him in his quest to go from their hometown of Brockton, MA to Orlando to get his car.

The show becomes a road movie, with Wayne and Del on the run from and with a couple groupings of other characters. First are Del’s father (Dean Winters) and her two lunkhead brothers. They are obviously out to get her back and get revenge on Wayne, who did some damage on the way out of town. Another grouping is two cops (Stephen Kearin and James Earl), who have taken vacation time to kind of chase the whole group to Florida because they — like a lot of people — have some weird soft spot for Wayne and fear he may get himself killed. Lastly is Wayne’s school principal (Mike O’Malley) who has taken Wayne’s wise-cracking friend (Joshua J. Williams) along with him for a principal’s meeting in Florida. He too has a soft spot for Wayne. So, two birds, one stone.

Outside of Wayne and Del, most of these other characters and their pairings do the heavy lifting on the comedy side. Del’s family is the least funny, as Dean Winters’ asshole dad routine and the idiot twin brothers routine gets old after a while. I mean, it’s not bad, but is less subtle than than the others and relies more on site gags and slapstick-y type stuff. Morons be morons. Mike O’Malley as the downtrodden principal is cast really well, and Joshua Williams is really funny and charismatic as hell. So O’Malley as hang-dog dude (who says he was hired as a temp gym teacher and then was all of a sudden the principal) and Williams with his incredibly sunny, teen energy are paired well together. Kearin, though, is the absolute weirdest character I’ve seen in quite a while. The actor and his delivery is bizarre in a really good way. Every time he’s on screen I sat up a little straighter waiting to see what the hell they were going to do with his very controlled, yet absolutely strange cop character. And Earl as his sidekick at first seems like the comic relief of the two, but they do this subtle switcheroo where he somehow becomes the straight man of the two. It’s pretty ingenious.

So, I’m not from Massachusetts. Duh. And, glancing quickly at folks’ IMDBs, neither are any of the actors save Mike O’Malley. Especially the two leads, who are from Ireland and Kentucky. Yet they are asked to affect very heavy, almost clownish working-class Masshole accents. And I’m no expert, but I’m going to go out on a limb and say that absolutely none of them sounded in the least bit realistic, except O’Malley, of course. Shit, Dean Winters is still doing his same NYC accent he does when he played the classic Dennis “Dummy” Duffy on 30 Rock. The funny part is that the whole thing was filmed in Canada anyway. Because, well, YouTube Premium.

Overall, this is one of the more violent shows around. It’s not gore violent. Or horror violent. But the lead character is a confusing amalgam of altruistic good guy and horribly violent anti-social psychopath. There is barely a scene that goes by where Wayne isn’t either delivering or receiving a beating or essentially surrendering his body to some brutalization. With fists. With a chain. With rocks and even a trumpet. He’s angry, but remarkably simple and innocent. He’s feral, really. But mostly he’s different. And a lot of care is put into each character, making the whole series feel worthwhile. And, yes, there are a few scenes that go a little off the rails. But on the whole, it’s an incredibly entertaining romp. Funny and action-packed and somehow also satisfyingly emotional without being manipulative. Now, YT has canceled the series after one season, but there is clearly hope on the part of the cast and viewers that Prime Video (who is currently streaming season one) might give the thing a second life. And I for one would be totally down for another Wayne adventure.