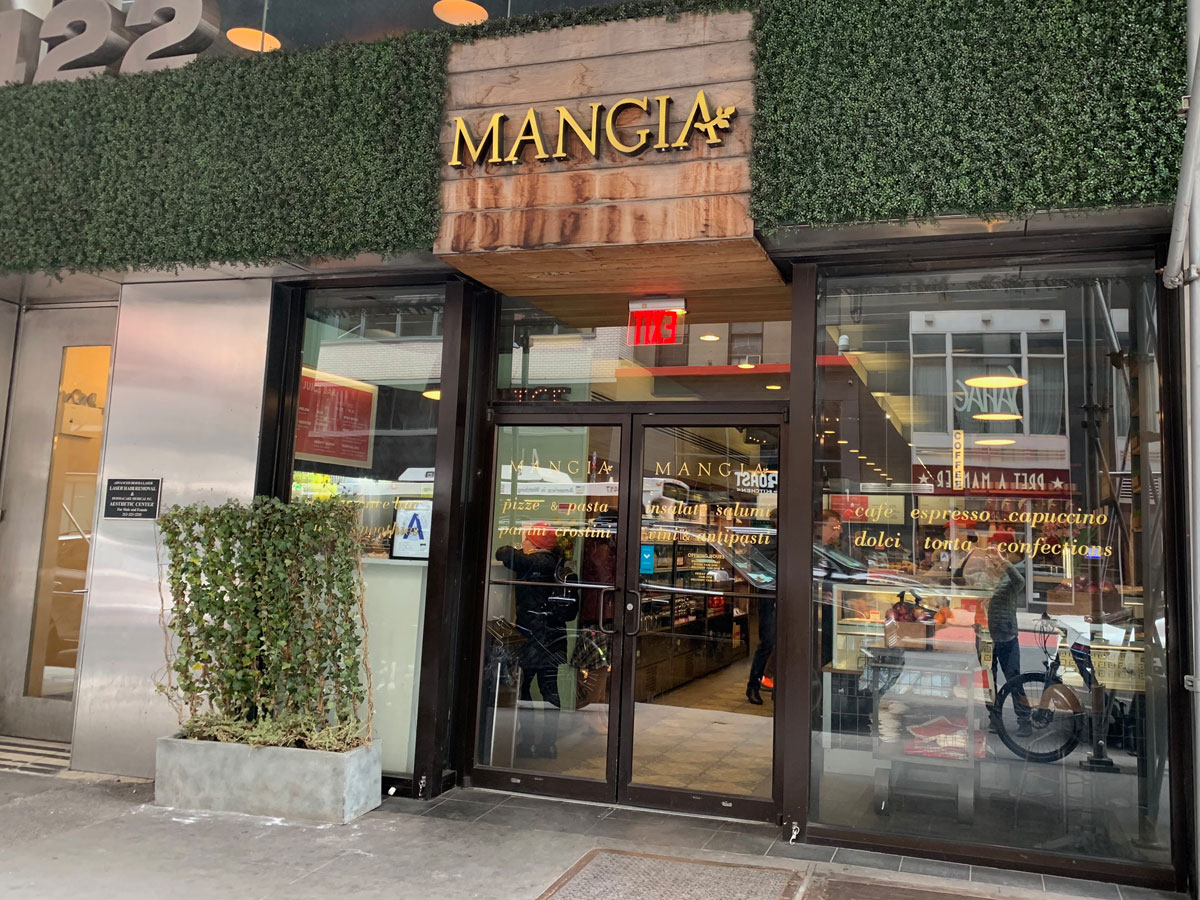 Mangia is like a food store for people who don’t care about food. A joint that is way more about catering corporate lunches than it is feeding the teeming Midtown masses. Those places that deliver a giant tray of bread and meat on a rolling cart piloted by a wide-eyed dude in a white apron while some blowhard strategist runs through his Powerpoint about synergy and changing the paradigm.

Yes, that place. The mix of swirled rye and pumpernickel covering stone mustard and turkey with green apple. Toted by the aforementioned aproned guy who is wondering why you’re staring at him with longing and hungry violence in your eyes. Because Brad won’t shut the fuck up about supply chain and the sales funnel when all you want to do is pounce on one of those roast beefs and chocolatey brownies. And then he finally stops talking and you’re told that we’re going to work through lunch and that you should just grab something as we move on to Maria’s presentation on blockchain. And so nobody cares about the food other than the fact it’s food. And I suppose it gives you something to do with your hands and face other than pretend to be interested in this completely irrelevant meeting. Ultimately, it keeps your belly warm and it’s free.

But, no, I didn’t experience this Mangia in that atmosphere. I actually went into the retail store and bought a tuna sandwich. An experience that kind of mirrors one of those stores that ostensibly sells clothes, but the focus seems to be on the architecture and decor rather than the blouses or whatever. Yeah, walking into Mangia feels more like crossing the threshold of an abc carpet & home than it does a restaurant. Despite cranking out what I imagine are thousands of sandwiches a day for those corporate events, their in-house production line feels more like mom making PB&J at the kitchen counter. The salad bar has probably seven things in it. And I feel like it’s in a half barrel with some ice in it. It’s “cute,” but not super useful. The whole experience is just way too twee.

But worst of all was the actual food. A flaccid, lifeless tuna deal that feels like what my mom used to serve me for lunch in the 70s. Including the wheat bread. So, there’s the rub. When this stuff is served to you during a boring-ass meeting for free, it’s “Yay, it’s Mangia!” Because it seems — I don’t know — fancy. But when you proactively march into the place to throw down your own hard-earned cash, it lacks the luster and distraction value that it otherwise affords in Powerpoint world.