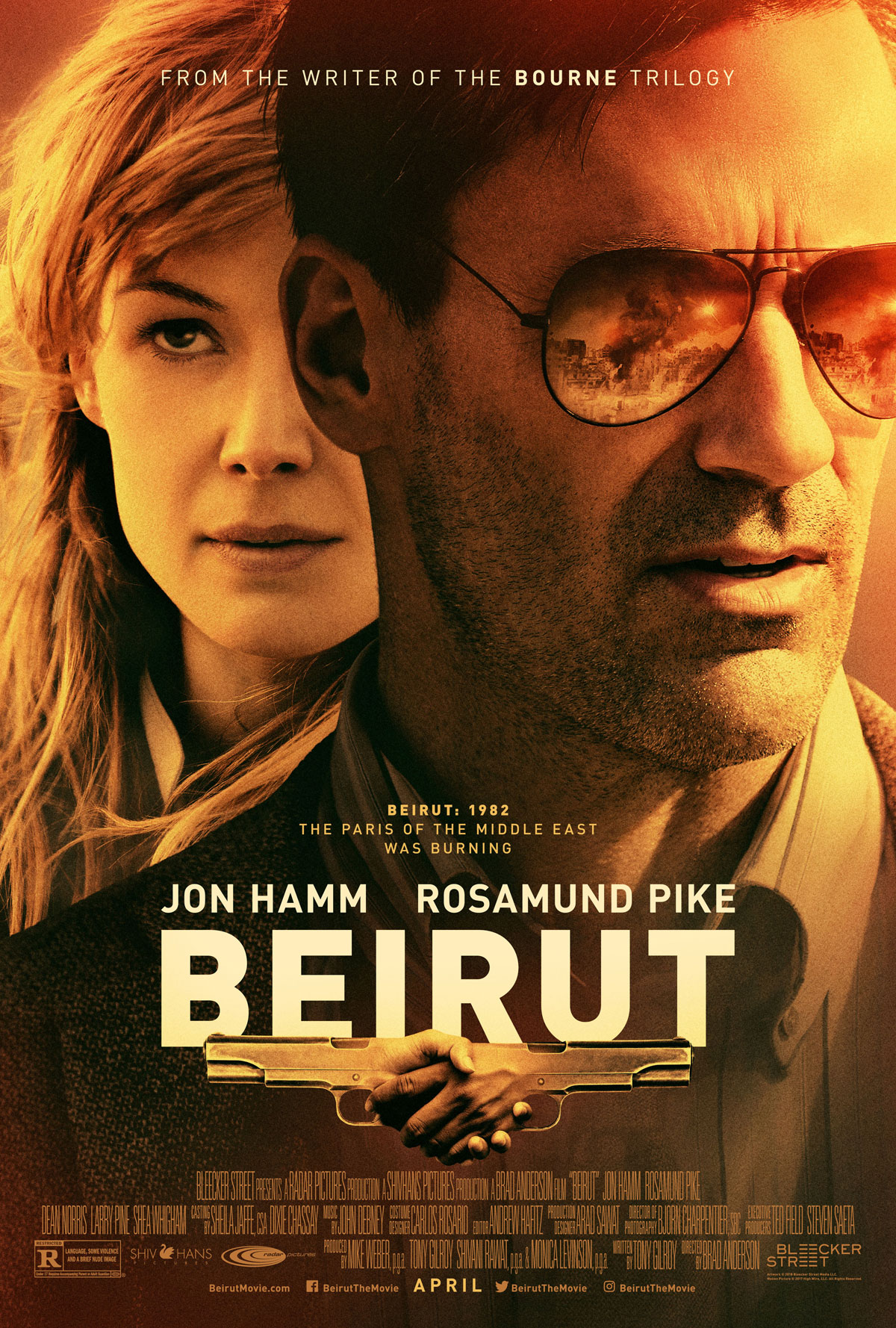 No matter what show or movie he’s in Jon Hamm will always be Don Draper. Even when he plays a dufus or another dufus or tries to sell me a Mercedes or tax services on the tv, I can’t help but imagine him in a 60s suit with a drink in his hand. Luckily for us, his character in Beirut starts off the film in 1972, which doesn’t look that different than the end of Mad Men in 1970. We get Hamm in his synthetic weave suit and sideburns with a drink in his hand. So, we’ll take what we can get.

The difference here is that instead of an ad man, Hamm plays a U.S. diplomat in Lebanon, whose expertise is in negotiation and mediation, named Mason Skiles. I kept wanting to call him Miles Mason, but that’s because I was drinking a lot of those little airplane-sized vodkas and am super-sensitive to altitude and cabin pressure. Ok, I was neither drinking, nor did I address him out loud (because he’s a fictional character in a movie), but that name does sound like something a writer would write and not something a parent would name his son. Whatever. Anyway, through some really unfortunate events, Mason’s wife ends up dead and his life spirals. Cut to ten years later and Hamm has literally become exactly what we expect Draper would become by 1982: a sad alcoholic working a low-paying job way below his ability and basically just wallowing in his own misery.

Enter the CIA. They want him to come back to Lebanon for some academic thing that is clearly a cover for something CIA-ish. No duh. Like any of these movies where someone is “done with that life” but then is pulled in for “one last job,” he is resistant with his handlers, a general rule breaker both because he doesn’t want to be there and because he drinks too much and because he thinks he’s smarter than those directing him. It’s a formula and it’s played to the hilt here. His attaché during this adventure is Rosamund Pike, who is low-key and, with her downcast face, is very interesting to look at on screen.

I can’t go into too much detail about why Skiles is there without giving too much away (though they say it in the trailer), but suffice it to say that there is a reason that they show you the scenes from 1972 with all the bad wigs and fashion statements, as some of those folks feature prominently in the later timeline. And these relationships are why Skiles is the person they come calling on to untangle their situation despite his fall from grace and clear substance abuse. Of course that abuse seems to mysteriously dissipate somewhat when the rubber hits the road. Another hallmark of these types of movies: the great disappearing mental or substance abuse issue that is supplanted and/or cured by heroism.

The narrative entangles this particular situation with the Lebanese civil war and the Israeli invasion, moving it squarely into international affairs and espionage territory. They do a somewhat decent job of explaining the players, but because that situation is actually pretty complicated, they had to simplify the particular predicament in the a-plot, which acts as a sort of central hub of the chaos in the region. They kind of whittle it down to the point that this would have or could have been a decent episode of Homeland. Hamm and Pike elevate the acting a bit, but the actual plot I swear was literally a two-episode arc of the aforementioned show in one of the seasons. Making it not a huge surprise the thing only made around seven million at the box office.

That all said, the film isn’t bad. It’s engaging and the subject matter is interesting and history-based, but the execution is a little clunky at times as they have to compress timelines and the characters’ motivations a little murky. The film looks nice for the most part and the acting is casually decent and relatively understated (which is good). There are a few too many coincidences and the feeling that they tried to pack too much plot (including a stunted b-plot) into a too-small box, but if you’re interested in that chunk of time in that particular region, you could certainly do worse. Don Draper dodging snipers should definitely be Mad Men season eight if they ever dare to make it.