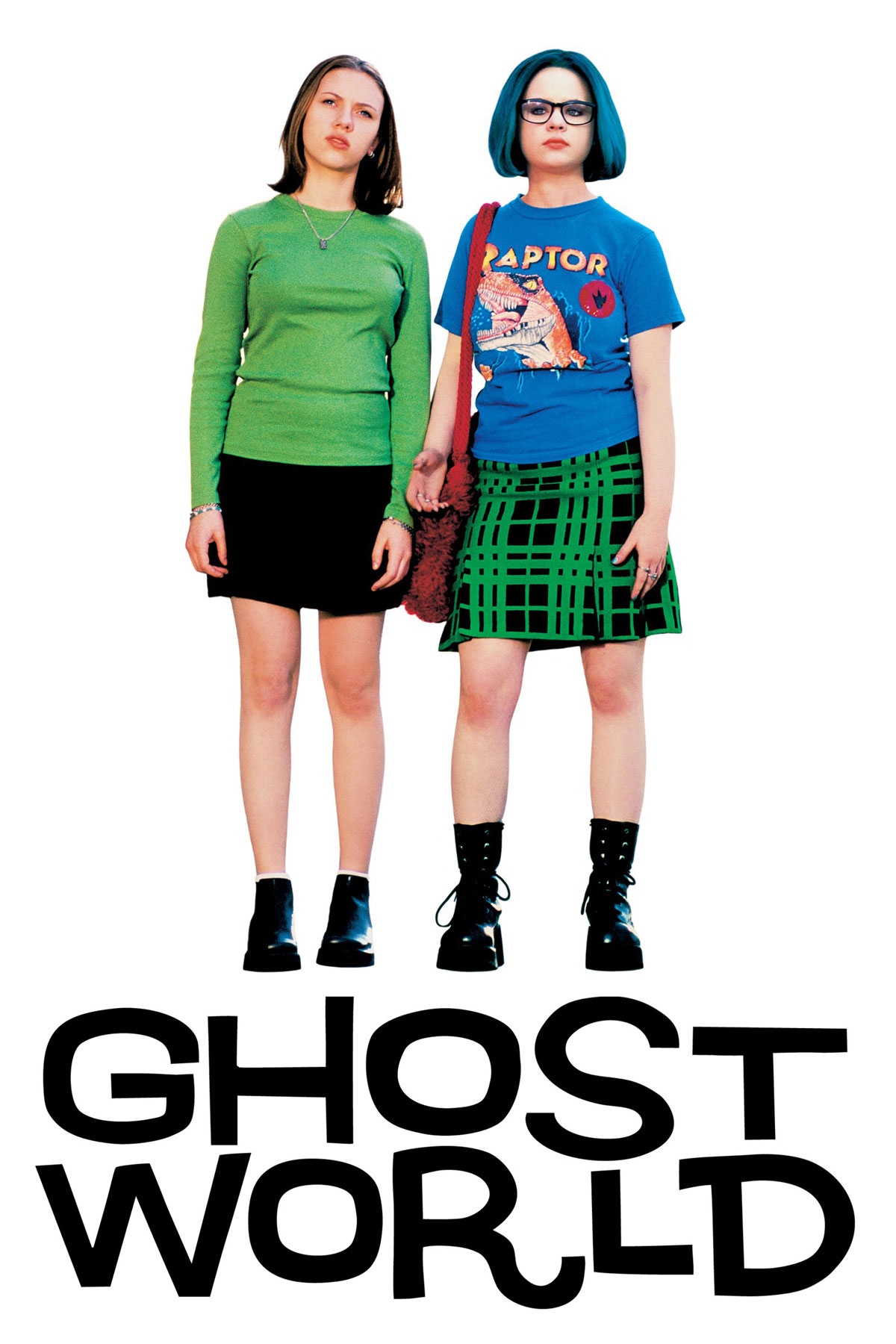 I have no idea if this is true, but this felt like one of the last indie movies of a certain type. Those languid coming-of-age “comedy” films that just kind of plod along with characters talking in rooms and on streets. The characters talking in a philosophical manner and getting into situations that belie their young age. I suppose Juno came along a whole seven years after Ghost World, but that movie felt practically slick and mainstream compared to this very DIY-feeling affair. This weird, meandering thrift store of a movie that on rewatch really outlines the somewhat empty cruelty of the main character, Enid (Thora Birch), in a world that shrugs at her attitude about it. Truth be told, she’s kind of a dick.

I’m sure somewhere someone has branded this a Gen-X experiment. Enid’s incredibly cynical character, along with her skirt/boot ensemble, closely mirrors that of Daria. You know, the MTV cartoon spin-off of Beavis and Butt-Head. This movie and that show overlapped time-wise as well. Though this film is based on a comic book featuring girls who graduated high school in or around 1990, and not 2001. Which would, in fact, make them Gen X and not older Millennials like Thora Birch and Scarlett Johansson actually are. Though I suppose they never say what year it’s supposed to be in the movie, so I guess it could have been a “period” piece and the girls could have been born in the 70s and not the 80s like they actually are. Ok, I’m done with this speculative nonsense, I promise.

But, honestly, I’m going off on a tangent because there’s not a whole lot to talk about with this movie. Enid and Rebecca graduate from high school and take tentative steps into adulthood in some faceless section of Los Angeles. A Los Angeles that is mysteriously devoid of other sentient human life. A ghost world, of sorts. I’m not really certain why this is the case, other than to make everyone else melt into the background in order to highlight the relationship of these two young women. But the girls aimlessly wander around, eat at a diner every day and generally play the slacker thing to a T. They make this immature pact to find jobs together, but neither seems to be a real hurry to do anything of consequence. Especially Enid, who spends her time making fun of the old and enfeebled. And goes as far as to pull a prank on a lonely guy, Seymour (Buscemi), who put a personal ad in the paper looking for a woman he met, but was unable to pursue. Enid answers the ad pretending to be the woman and then sits and makes fun of the dude when he shows up to meet her. It’s a real dick move that is seemingly done out of boredom and, well, just being a selfish asshole.

Through this encounter, Enid becomes fascinated with Seymour and eventually befriends him. A man — going by the actual actors’ ages — to be exactly 25 years her senior. Assuming she’s 18, that would put him at 43. Math is fun! She obviously doesn’t let on about the prank, but is weirdly into his old-man obsessions with ancient blues records and basically anything not modern. It’s unclear if her attachment to him is real, or is just an elaborate goof. He certainly questions why she wants to hang around him and his loser record-collecting friends. Whatever the case, her original plans with Rebecca are jettisoned because of her blossoming relationship with Seymour. Because, again, Enid is pretty much an asshole. Things get weird when Seymour actually forms a romantic relationship with an age-appropriate partner and Enid’s true colors come out. Or at least that’s how I interpreted it. And things just kind of go downhill from there with both Enid and Rebecca’s friendship and Seymour and Enid’s friendship. All because — let’s all say it together — Enid is a flaky jerk.

And, look, I know there are plenty of people who loved this movie back in the day. It’s supposed to be some deep rumination on what it means to become an adult. And stuff. But it’s hard to enjoy a film where the lead character is ultimately an unkind, bad person. I mean, she’s not a serial killer. And she doesn’t do too much stealing or robbing or anything. She’s just a really, really bad friend. An aimless, seemingly lazy human who builds trust and then kind of shits all over it with her terrible attitude and self-involved nonsense. So, yeah, not a world-killing galactic maniac. But just not particularly sympathetic. And this is probably not how I’m supposed to watch these films. These art house, almost anti-Hollywood movies that purposely challenge our sense of good and bad. But I’m team Rebecca. Sorry, man. I know she’s supposed to be the more attractive one. The one who, in a misfit team of two, has all the advantages. But she also has follow-through. And follows the rules set forth in the friendship code. And doesn’t break poor Steve Buscemi’s brain with her feminine wiles. Not that one needs to take sides in a film, but I tend to personalize things. And if I had a friend like Enid, I’d definitely have to wish her luck and move on.

This all said, the film certainly affects a very specific look that almost feels a bit fake in the way a comic book panel might. The costuming and set decoration is also super-memorable and is probably a large part of why people of a certain age recall seeing this at the Angelika or on a friend’s VCR. It does just feel very of a time and is honestly why I wanted to revisit it. Nostalgia for a movie very heavy on nostalgia. And Thora Birch, of course. Despite not really liking her character in a very visceral way, she plays it incredibly well. It’s not entirely different from her character in American Beauty — or maybe I’m misremembering that part. Because we are never again allowed to watch American Beauty because of fucking Kevin Spacey and the revisionist history hot takes that the movie was always problematic and bad. Even without its Spacey issues. In any case, Birch’s deadpan snark is very well-worn, and she somehow doesn’t even look the least bit embarrassed that they stick her in this weird sailor suit at one point, and a Batman mask in another. She embodies the character — jerk or not — perfectly.

Look, I get why people might like this movie. It’s like the anti-Clueless. But only sort of. It’s not as if these characters are super-intellectual or even overly curious about the world. Enid makes fun of the meatheads and even the ambitious young people around her. But then is drawn to weirdo outsiders like the shirtless nunchuck redneck. And the bitter lower-middle-management Seymour, who seems to live his life to battle against progress. And clearly doesn’t seem overly concerned with contributing to society in any significant way. So even if Cher from Clueless seemed vapid and shallow at times, she at least strived to be successful in her privilege. Maybe as I age into my Gen Xness I’m less and less interested in the cynicism. I’ve always considered our generation less cynical and more cautiously optimistic. Or brutally realistic. But either way, I don’t believe in cynicism for cynicism’s sake. It’s exhausting and, frankly, writer of the original graphic novel, Daniel Clowes, is speaking for a generation of which he (born in 1961) isn’t even a part.