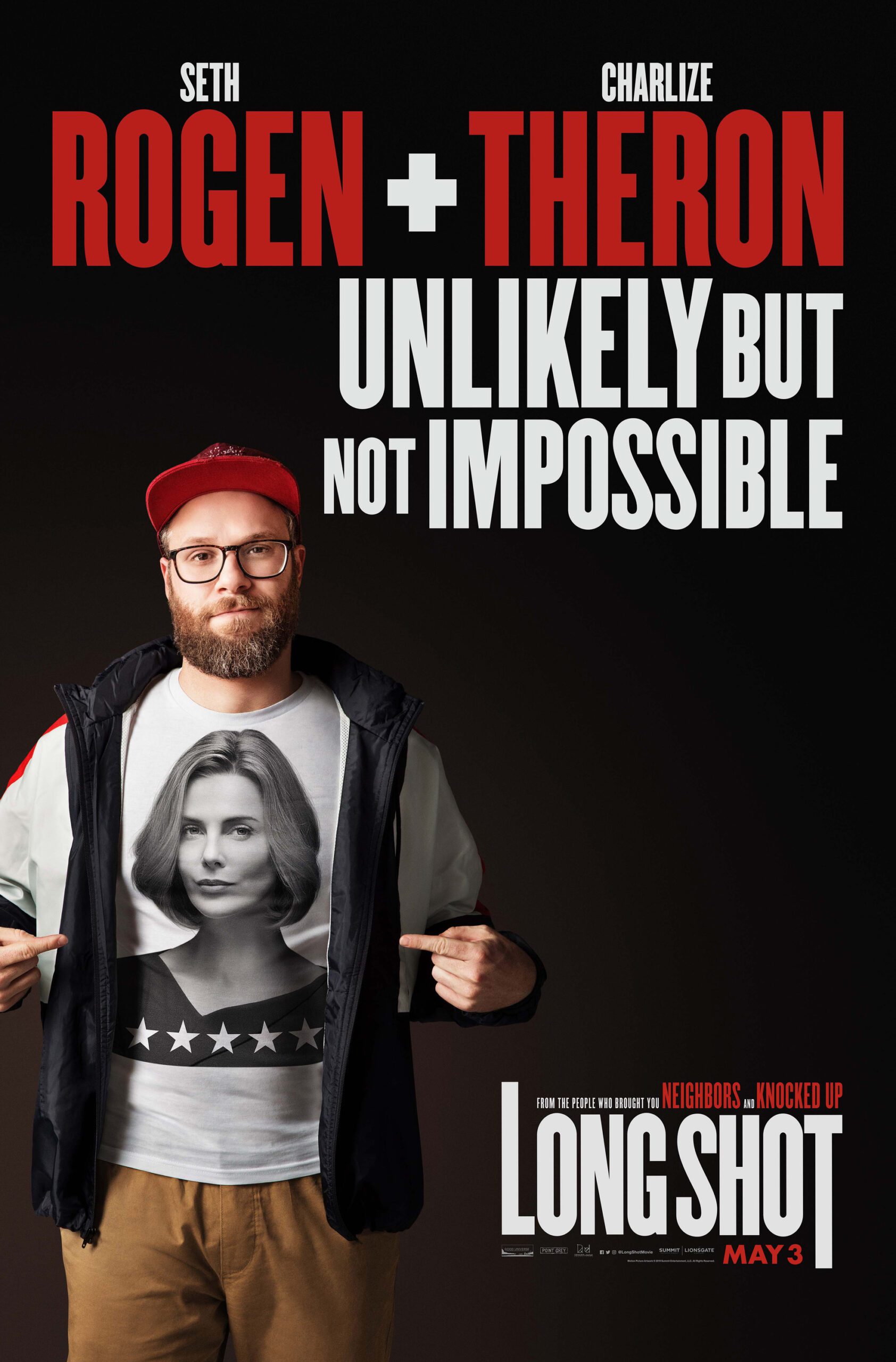 Long live the romantic comedy. No, seriously. I’m a sucker for them. They make for the perfect background entertainment. Or, in this case, the perfect in-the-air entertainment. Shit, I once watched No Strings Attached and Friends With Benefits back to back in the same afternoon. They are essentially the same bad rom-com movie. But they killed some time and I didn’t come away from it scarred in any possible way. The same can be said about Long Shot. Is it going to change lives? Absolutely not. Is it recognizable as anything other than a weird attempt to appeal to the young-ish stoner crowd and the, well, the everybody who likes Charlize Theron? Nope.

But mostly they thought they had in this beauty and the beast tale, a crossover hit whose rom-com-ness would appeal to women, and the no-way-would-Theron-ever-bang-Seth-Rogen thing would appeal to their dorky boyfriends. Or that’s really the only thing that makes sense here. Because, otherwise, this movie has no right to exist on this planet.

Rogen plays Rogen. He’s a stoner buffoon who writes annoying articles for some fake newspaper in Brooklyn. He’s an immature asshole who probably has some sort of talent but squanders it by being an unbending schmuck. In other words, some big right-wing corporation buys the newspaper he writes for and is going to take his “serious” journalism (which seems to have an inordinate amount of profanity and illusions to blow jobs) and make him into a clickbait guy. Or something. So he takes his bong and goes home.

On the other end is Charlize Theron, who is apparently the world’s most attractive Secretary of State. But she’s a hard worker and is way more believable at the job than any of our recent entrants. The President (Odenkirk) is a former actor who played the President on TV and is a complete idiot. He decides not to run for a second term and puts up Theron as his successor.

So how do we connect these two unconnectable people? Well, Theron is Rogen’s former babysitter! Rom com gold, I tell you! Theron is a woman with no time in her life. She’s always been pretty and cool and driven. Rogen is a dork with no job who dresses like a beeper salesman from 1992. In a coincidence that only happens in rom coms — movies where these types of things are just run of the mill — the two reconnect. Her image consultant thinks she’s too serious. Seth Rogen is anything but. So she hires him to “punch up” her speeches with some jokes. Despite him not being a joke writer. Whataya gonna do; they need to get these lovebirds together somehow.

Really, though, the only thing anyone cares about is if the two of them are even remotely believable as a couple? Well, kind of. Which I suppose is more than you’d expect. I think the only concession he ends up making during their relationship is shaving his neck. She, however, loosens up by taking a ton of hallucinogenic drugs at what looks like some club from the mid-nineties. And, well, dating Seth Rogen. What you hope doesn’t happen, at least, doesn’t happen. Because we’ve seen enough movies where a driven woman realizes that she wants more of life than her great job and power and just ends up running a B&B in Vermont or something. That doesn’t happen here. Which is good. But, honestly, his character isn’t that funny. And not that charming. So…

But, honestly, it would be interesting to see a movie where like President Ryan Reynolds gets with standup comic Rebel Wilson and we’re asked to believe it. I mean, I have no interest in seeing that, but I imagine there’s a reason that movie hasn’t been made. Funny dude and hot, powerful woman = fine. Funny woman and hot, powerful man = box office poison. The point is, we’ve been inured over the years in every rom com under the sun to dudes dating way out of their class. But not so much the other way around. This one could be worse, but we just go with it.

Anyway, I killed over two hours watching this thing, which ended right as I landed in Texas. So, good on me. But I can’t really say this thing has broken any new ground or really given us much to think about. It’s a paint-by-numbers rom com that tries to overcome its vanilla-ness by employing two charismatic actors that have a very “them” thing. I find that Rogen’s “thing” is getting old. Theron, however, is always great and is a pretty decent comic actor. Though she definitely felt stifled by a script that needed to do certain things at certain times to lock down the genre.