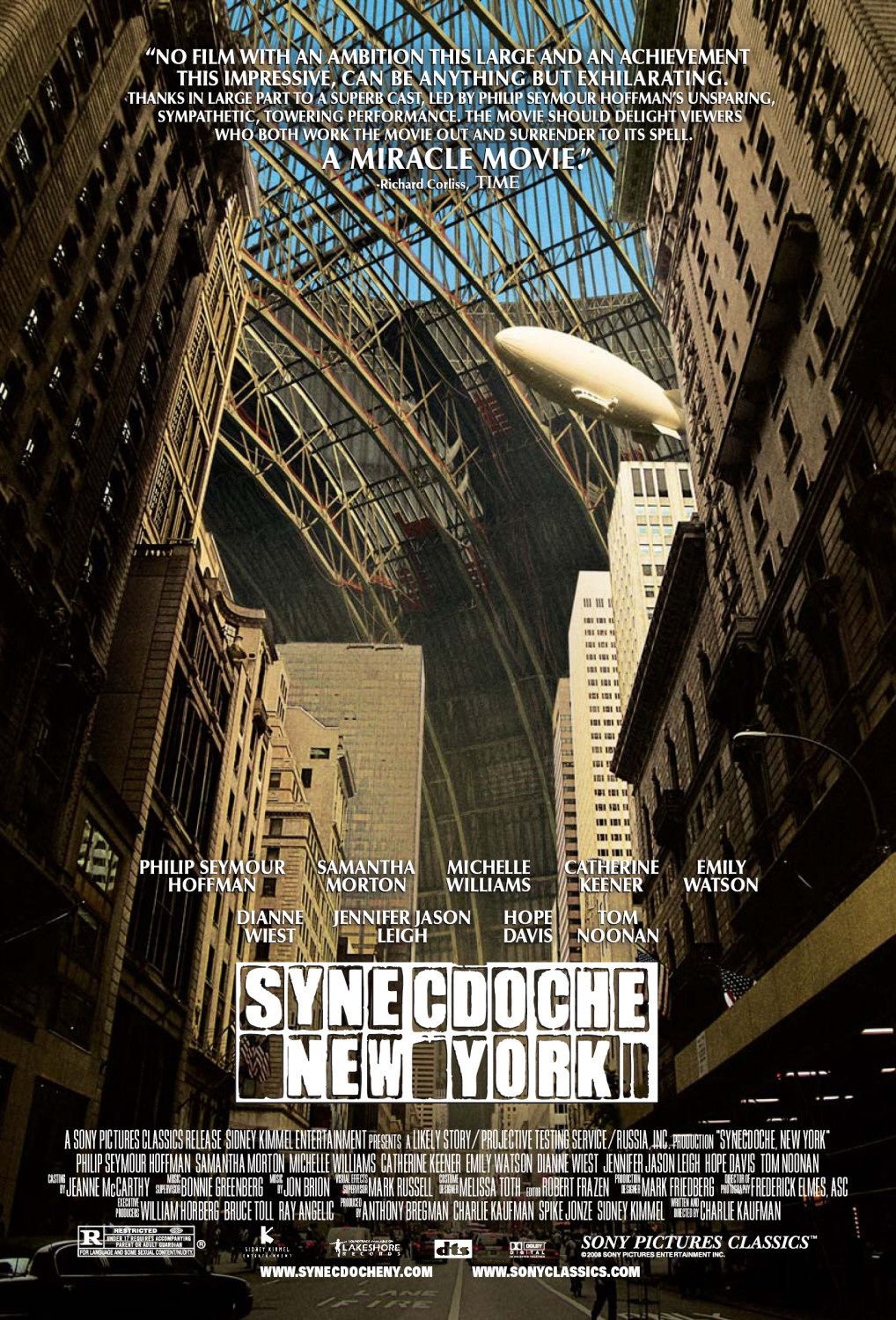 So I watched this one on the iPhone while in a waiting room in a hospital waiting for Ms. Hipster to get her gallbladder yanked. The room and situation were surreal, so the film was a perfect compliment to the weirdness. This particular hospital believes in the low lighting approach to hospital calm. Shadows pool in corners, people squint to read wall plaques and the general mood late at night was sleepy and vaguely reminiscent of something I couldn’t quite touch upon, but had a whiff of bad news.

That said, the surgery went well. Sadly, I can’t say the same for the film. In this high (way high) concept film, Charlie Kaufman (this time writing and directing) creates a character in Philip Seymour Hoffman who in turn creates a character of himself–along with everyone else in his life. But what and which life is real, and which is part of his created world? The lines blur to the point one gets dizzy thinking about it.

The basic plot (and this is an amazingly simplified version) is that Hoffman, a regional theater director in Schenectady, wins a grant for his play–a grant that apparently comes with an endless amount of money. The problem is that his wife, a famous painter in her own right, is completely unsupportive, disinterested in him and ultimately goes to Europe on a tour with her miniature paintings and decides to stay there, sending for their daughter as well. This crushes Hoffman, but pushes him to move to Manhattan to start his project under the grant. Turns out he wants to rent a giant warehouse/hangar to stage the play, which seems to be a play about honesty and real life, because, of course, there’s enough drama in life to make it a legit dramatic play. Hoffman, who is both prophetic and pathetic, spins out his play’s narrative to its logical sad end, along the way creating an entire city inside his gigantic warehouse. The film takes place over many years, as his non-script about the mundane actions of life turn out to be not at all mundane for him, as he takes a new wife who is both actress in his play and wife to the man who he hires to play him in the play, fathers a new disabled daughter and somehow either inspires or endures what seems to be the apocalyptic end of NYC (or something). All this while his real world estranged daughter can’t be pulled into the controlled world of the play, living her own life in Germany with a woman Hoffman hates.

Trying to put any kind of binding on this film is next to impossible so I’m going to give up trying. Suffice it to say that the film becomes just a little too smart for its own good. It becomes at times melodramatic, and other times reminds me of the Joker after he gets his face sliced. For some reason that’s beyond my comprehension, Hoffman’s systems start shutting down, drying up his eye juice, salivary glands and all sorts of other grossness. And watching the film just becomes laborious, tiring and depressing. Despite my general hatred of giant blockbusters, at least they provide a modicum of fun. This movie is a fuckin’ drag (pardon my French). It was a good, original idea taken just way the hell too far. By the end I just wanted check myself in.