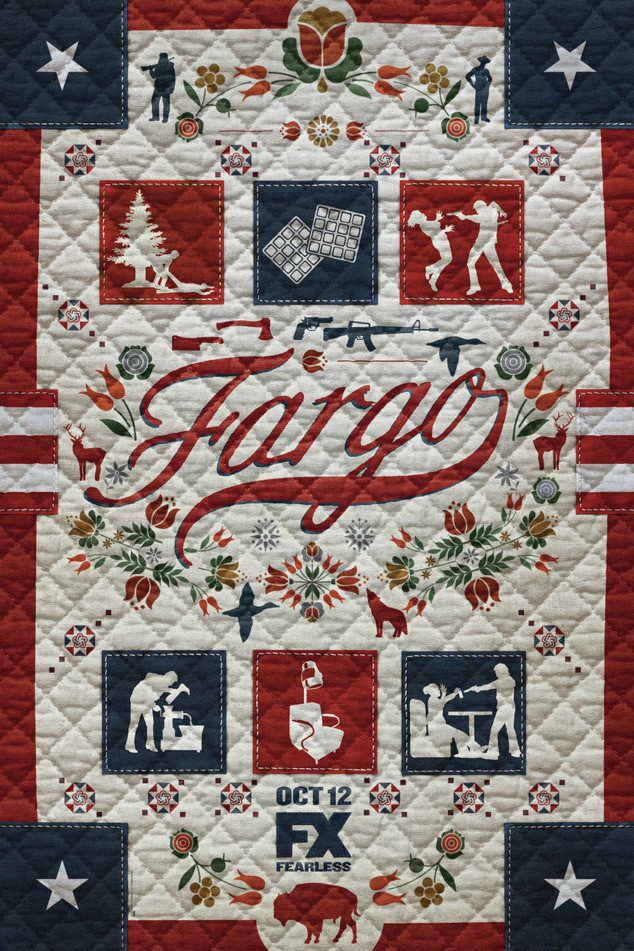 Season one of Fargo, the series based on the Coen Brothers’ movie of the same name, kind of followed a lot of the same plot points and a lot of the same beats. And, like the movie, it was good. This, season two, takes us back in time to 1979 when one of the supporting characters from season one, Lou Solverson (originally played by Keith Carradine), was a young state trooper in Minnesota and facing a burgeoning turf war between organized crime organizations in Fargo. So they’ve moved on from the source material, so to speak, and are now telling a brand-new story that is certainly connected to season one and takes place in the same places, but is definitely its own thing. But, at the same time, it owes a ton to the Coen Brothers’ canon.

For anyone familiar with the Coen’s films, there are easter eggs and straight odes to their movies throughout this season. Plus some other clear indications that Noah Hawley and his people watched a lot of Twin Peaks and appreciate quirky dialog and surprisingly bizarre surprises. The main plot, which involved the aforementioned criminal enterprises — one from Fargo and the other from Kansas City — was essentially a gangster film. A fight over territory, which, as far as could tell, involved trucking routes and stuff. But, like most Coen plots, those details are completely irrelevant. Instead it’s all about the characters and their interactions and the consequences of their decisions. And, like most good Coen plots (despite them having little to nothing to do with the show, apparently), most of those consequences are either violent, ironic or both. Mixing in those direct homages (at least the ones I noticed) to Raising Arizona, Miller’s Crossing, Barton Fink and No Country for Old Men the whole show just felt tightly wound, expertly told and ultimately familiar to anyone who cares about that filmography.

But, of course, the best things about these types of shows are the situations and the cast. And they really put together a doozy. One of the podcasts I listen to said something about any show being that much better when employing Ted Danson. And, boy, could I not agree more. For me, my Ted Danson appreciation started with Cheers, of course, and continued on and off on Curb Your Enthusiasm, but came back into focus when he played an amazingly scummy character on the show Damages in the late aughts and an incredibly funny wealthy stoner on Bored to Death around the same time. The guy is just incredibly watchable and warmly believable no matter what he’s playing — and also really, really funny. Here he essentially plays the patriarch role that Carradine’s Lou Solverson played in season one, though now, being in the past, Solverson is the student and Danson’s Sherrif Hank Larsson is the teacher (and literally his father-in-law). He, paired with Montclair’s own, Patrick Wilson, are terrific together. Both of them are calm and kind and terrifically confident, while also being humble. They’re unlike many characters, especially cops, that you see in modern television shows. And both are utterly believable in their roles. Then you have Kirsten Dunst and Jesse Plemons as the couple caught in the middle (there’s always a couple caught in the middle). Dunst is “touched” (in the words of Danson’s character) and Plemons is the good guy who is put upon by his wife’s craziness and her ever-evolving and deepening association with a turf war she accidentally got them involved in. She — as most crazy characters do — gets most of the good lines and clearly had some Emmy scenes written for her, but Plemons (aka, fat Matt Damon), and his subtle, quiet performance has really set himself up for some future work. Bokeem Woodbine plays a character not dissimilar from Sam Jackson’s Jules Winnfield character in Pulp Fiction, but Woodbine makes it almost impossible to look away from him when he’s on screen threatening in his soothing tone. And let’s not forget Nick Offerman, who plays the town attorney and drunken windbag. But a likable one. And that dude steals every scene he’s in as well.

So there is lots of family drama, lots of shooting, quite a bit of violence and quite of few of the cast end up dead. There are funny accents and weird characters and plenty of threads that are pulled, but never really tied up. The show looks great, the acting is spot-on and all-in-all it is what television can be when you have the vision, the talent and the green light to dream up a world that on the surface wouldn’t seem commercial, but resonates so clearly in the end with just about anyone who has ever had loved ones and tried to make his way in the world.