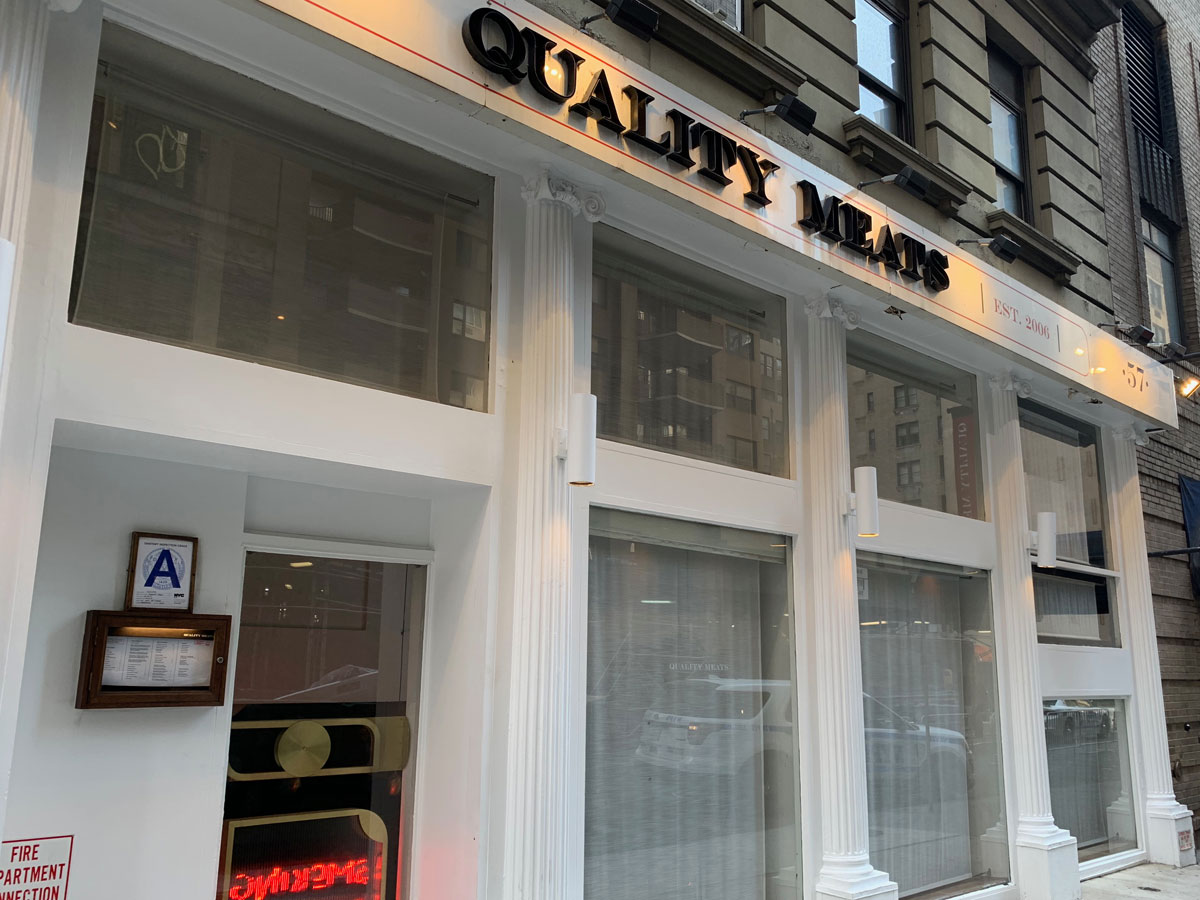 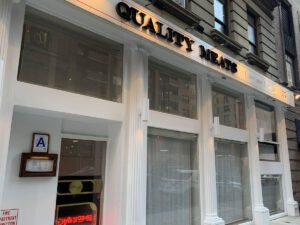 Quality Meats is a confusing joint right off the bat. It feels subterranean, but it’s not really subterranean. Or is it? It’s a steakhouse that feels more like one of those meandering Irish pubs you’d find in Ireland. The lighting is all over the damn place, and the table we sat at was in a weird, floaty space that was neither in a corner, nor in a walkway, but somewhere in between. I just felt confused — and I had admittedly been drinking before I showed up, so my confusion was somewhat enhanced by bourbon — by the whole space and the multi-level thing and walls of bottles and the little cubby space and the branch chandeliers and whatnot. Man, I might have been drunker than I thought.

Despite being a little inebriated (just a little), I came bearing an appetite. I started off the meal with a lovely Manhattan. Because that’s what one does at a steak house. Even a modern one like this. And then the bottles of red came out. Did I mention this was a work dinner? And that meant it was on the boss and I could just like pick anything on the menu and feel no pain in my wallet pocket thingy. But I’m not that guy. I didn’t go for the tomahawk or the filet. It’s actually a pretty small list, but I did order the cheapest steak on the menu, which was still thirty-nine bucks.

So, what did almost $40 buy my company? A hangar steak with brandied cherries. A what? No, it’s exactly what it sounds like. One of my favorite cuts of meat with literal little cherries on top (which I never would have ordered stone-cold sober what with my general dislike of fruit and shit), which essentially ended up tasting like my favorite cut of meat with a Manhattan on top of it. So, pretty excellent. The slice on the steak itself was a little thicker than I would have imagined, but the cherries gave it a nice glaze and a really flavorful spice to the thing. Like an almost alcohol-like burn. But pleasant. Quality-wise, it wasn’t the best cow I’ve ever had by any stretch (despite the name of the restaurant), but it was a nice departure from just choking down a large chunk of meat. That’s what she said.

Folks also ordered some sides for the table, one of which was a freaking corn crème brulee, which cannot be bad on any planet. The parmesan waffle fries weren’t that memorable, but some of that evening went down the old memory hole, so they may have been the best thing since something called parmesan waffle fries. I was definitely focusing on the work conversation going on and not on the server and the service, but we were there for quite some time. I think that pacing is just part of the ambiance, though, and not necessarily a sign of slow service.

There are a lot of steak joints in NYC, so it really takes something special for one to stick out. While I enjoyed my meal, I certainly wouldn’t put this in the upper echelon. But check it out if you’ve been everywhere else and want something a little different. Especially if someone else is paying. Though, that pretty much goes for everything and everywhere.