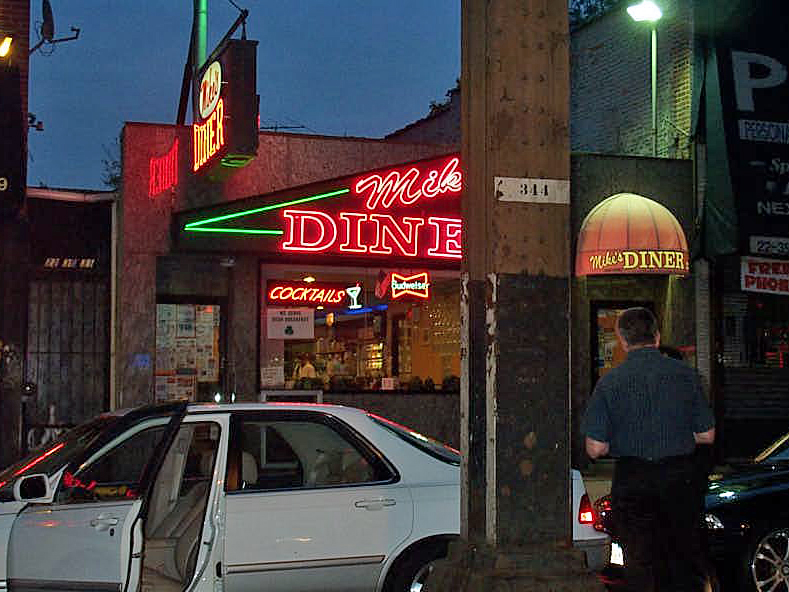 Ah, the bold tradition of the Greek diner. I’ll have the lobster thermidor. No you won’t. You’ll have the eggs, hash browns, toast and perhaps a flat Diet Coke. Hey, at least those options are there. And who could imagine a better place to enjoy the authentic Greek diner than in Astoria, home to more Greeks than Daytona Beach in March? Of course Mike’s is no ordinary diner–no sir! Every New York politician must make his/her stop at Mike’s if he/she wants to get elected. Hillary and Bill both stopped by. Pataki and Rudy made appearances. Dukakis, ironically, skipped Mike’s and look what happened to him (he rode in a tank wearing a helmet that was too big on him and lost in a landslide.) Mike’s is the home of the magical elf waiter, a man who is so fast he can actually get you your order before you finish ordering it. He is also preternaturally small, allowing him to slip into places that would otherwise be impassible for a normal human being (he will not, however, unclog any bowel obstructions, blocked pores, esophageal hindrances, etc.) This means getting your eggs while they’re still steaming, your hotcakes piping hot and your buttered bread still crunchy. Yes, Mike’s is popular. Yes, Mike’s is usually packed. No, we don’t actually know who Mike is, but if we were to meet him, we’d shake his hand and tell him to keep on keepin’ on–whatever that means. [MF]