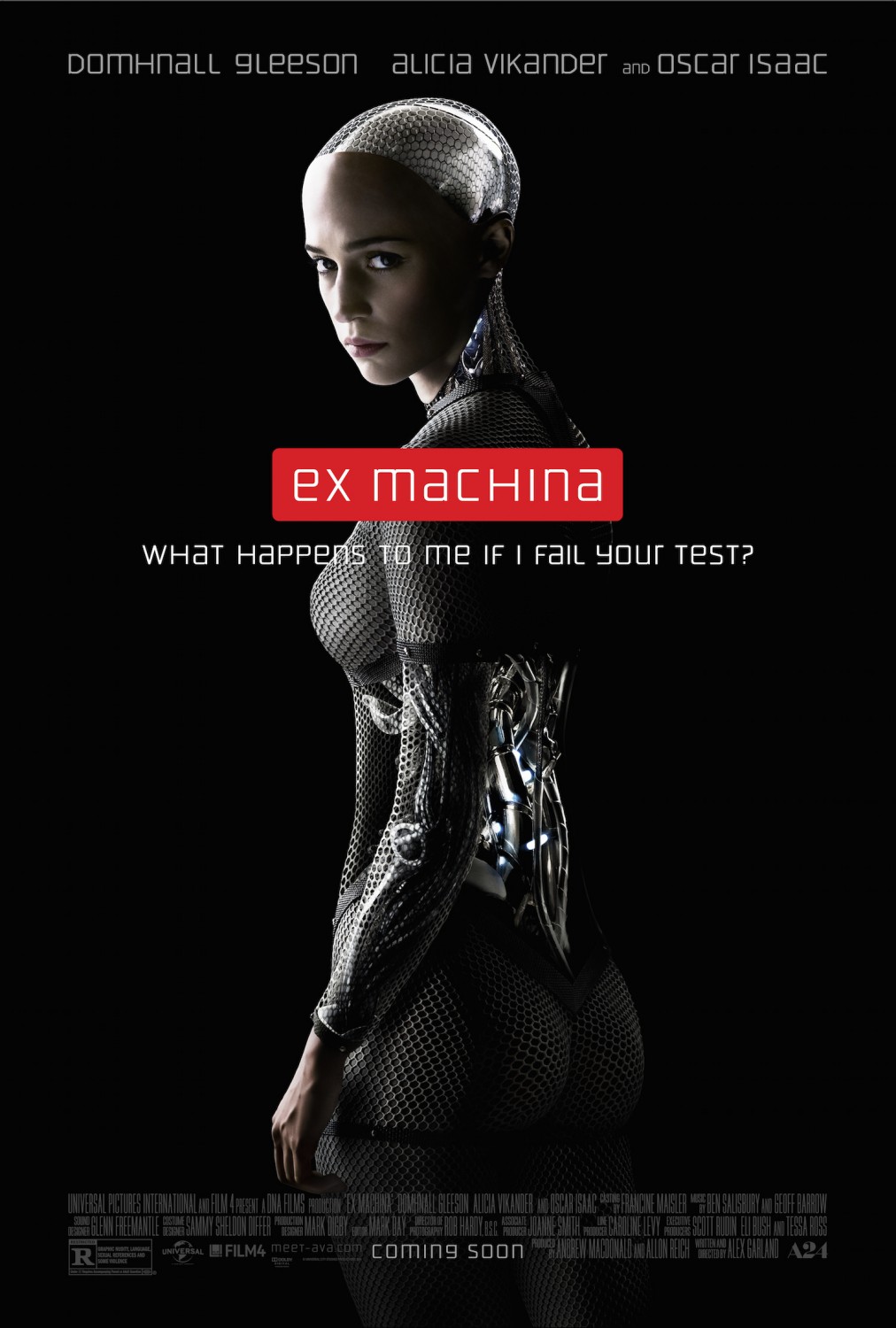 Give me more fucking robots! That was my war cry before putting this DVD in the tray. Give me more DVDs! That was the second thing I said, thinking about how nobody watches DVDs that aren’t childrens’ movies anymore. After Black Mirror and HUMANS and years and years of other stuff from Bladerunner to A. I. to Making Mr. Right, I’ve watched television shows and movie after movie about how we relate to intelligent robots and wondered how else we could expand the genre. After all, we have benevolent, helpful robots like Small Wonder and evil, world-wrecking robots in Terminator. And, of course, robots who seem cool, but totally aren’t like in Alien. Anyway, we seemed to have exhausted that plot line. So where is there for Ex Machina to go?

It turns out you can take the android plots from all sorts of movies and kind of mash them up, strip them down, add some cool-looking effects and grind a movie out of it. And not a bad movie at that. Of course that movie — this movie — is less about robot wars and robots in general than modern technology and us screwing with it, wrapped in a psychological stage play. The whole movie takes place in an isolated hotel in Norway and a studio in England dressed up to look like an underground research facility, all meant to be the house of a Steve Jobs-like genius (Oscar Isaac and his miraculous beard) who created a Google-like product and has now moved on to a super-secret project involving androids and artificial intelligence. So the world, as it is, is super-limited and clostrophibic rather than far-reaching and apocalyptic. With that, there are basically three people who speak in the entire movie. And that, in and of itself, makes the thing interesting. It was also a $15MM budget, which, these days, is almost unheard of — especially for a sci-fi movie.

So the plot here is simple: said reclusive tech baron holds a contest at his company for his employees. The winner gets a week with him at his secluded home to just hang out. Imagine, as an Apple employee, getting to go and chill with Steve Jobs’ ghost at his house. Exciting, right? So the winner is this fresh-faced coder, who is flown via helicopter to his mysterious retreat in the mountains. Turns out the guy is a bit of an egomaniacal alcoholic weirdo. But one who is now using this coder to essentially QA his new android to see if her artificial intelligence is up to snuff using the tenets of the Turing Test (which is what is used in those oddball questioning scenes in Blade Runner). And that is where the movie really derives its tension. This innocent kid, who feels like this innocent android is just like him, while its creator knows that she is really more like him (and he’s a giant dick). But, as the viewer, we don’t really know or understand what her motivations are and where and why she’s doing what she’s doing and who is manipulating whom.

Like most physiological thrillers (though really not a thriller, but more of a slow burn), there is a twist at the end, but this one is probably less thrilling and surprising than the creators of the film think it is. Ultimately, that doesn’t matter, though, as the film itself is tightly wound, very well acted and super-beautiful to look at. It’s actually a nice break from the norm being locked in this small space with a limited cast and really being able to concentrate just on the language and the plot instead of worrying about tracking complicated narratives and exploding cities and worlds. I’m just excited that someone thought to make a movie in this day and age that makes you think after the credits roll — even if it’s stuff you’ve been asked to think about before.