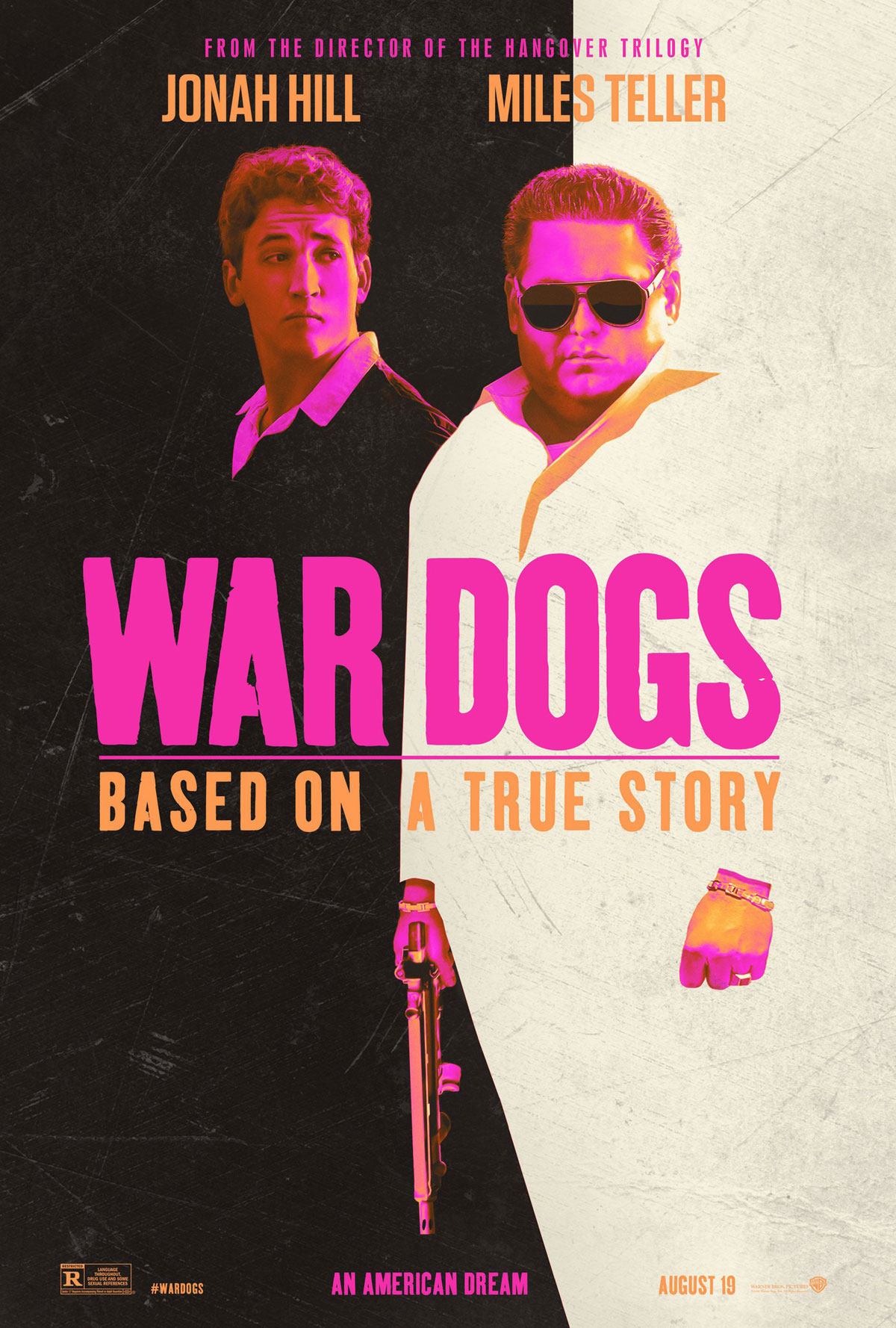 I suppose War Dogs would be Todd Phillips’ other film. The one that isn’t Old School or The Hangover or even Joker. In fact, I had little recollection that this was even a movie until I ran across it on some streaming service. And I figured, “Huh, Miles Teller and not-skinny Jonah Hill. Seems like a winner!”

Miles Teller’s character, David Packouz, is a massage therapist in Miami. He tries, unsuccessfully, to buy a bunch of crappy sheets and sell them in bulk to retirement homes. A legit business, but a stupid one. He somehow has a really cute girlfriend named Iz (Ana de Armas) who he has recently knocked up and is trying to plan to support. Obviously his options are limited.

Enter greasy-ass, Efraim Diveroli (Jonah Hill). In a sports car from LA, sweating profusely in the Florida heat. They are apparently childhood friends, but Diveroli was sent away at some point by his Orthodox Jewish parents because he’s clearly a dicey dude. But now he’s been out in CA buying guns from police auctions and selling them back to people at a profit with his uncle. He has a scheme to take what he’s learned there and apply it to government weapons contracts for Afghanistan.

Diveroli is from an orthodox Jewish family that is highly connected in LA. He seems oddly estranged from them, and his exit from CA pretty hasty. But Packouz, desperate after his sheets debacle, decides to join forces with him in his endeavor. From moment one Diveroli is shady. He takes advantage of the government’s policy that they have to contract out arms sales via a website so as to keep those deals technically above board. So it starts off as a legal deal. Although Diveroli lies to the dude who’s funding him — playing up his Judaism and Zionisim to manipulate him — and seems to like prostitutes and maybe some drugs and whatnot. So, typical Florida dirtbag.

Their chase of these deals escalates over time, Diveroli eventually saying that they can fulfill a large deal for guns that he has no way to actually fulfill. So he goes gray market and somehow pulls it off. And then another very large contract, where he falsifies paperwork and accidentally underbids all of the legit dealers. Winning the contract with absolutely no way to follow through. Enter the super-shady, very illegal gray/black market stuff that involves 3rd world nonsense and the caper portion of the film.

Through all of this, Packouz lies to his peace-loving, pregnant girlfriend about what they’re doing. It’s a constant juggling act to hide the fact they are selling guns and ammunition to fuel a war she is vehemently against. Of course, we don’t really get the sense she’s any more opposed to it than the typical person, but I suppose we’re just supposed to understand that him lying to her, regardless, is a problem. Of course while he’s lying to her, Diveroli is clearly lying to him. And sweating. A lot. Packouz seems to know and understand his friend is a scumbag who is eventually going to land him in hot water, but overlooks it because money is rolling in and, again, he has very few other prospects.

Miles Teller is a decent actor. He doesn’t have a ton to do here, but he manages to make us understand he loves his girlfriend, fears his best friend and is definitely conflicted. His comic timing is great and he makes the character believable. Hill, on the other hand, is fine sometimes. He looks the part — although just looking at him sometimes make me super-uncomfortable — but sometimes it feels like he spaces out and his acting kind of fails him. He’ll literally be doing fine and then he’ll just have a line or a scene that’s a clunker. Granted, there are scenes that are so clearly Phillips just trying to make his character’s personality completely over the top that it may not be his fault. Like Hill purposely punts a couple lines hoping that they drop them in post. I’m not sure what’s going on there, but it’s something I noticed that distracted me. Phillips also clearly called in a favor and stuck Bradley Cooper (who is a “producer” on the film) in the movie in this bizarre, creepy-ass role that’s apparently based on a real-life arms dealer. He’s unsettling.

Anyway, the idea that these two weed-smoking dumbasses managed to essentially cheat their way into being huge arms dealers to the US government certain sounds like it would make an interesting movie. But Phillips kind of split the baby. Instead of making a Syriana, he tried to actually make a film akin to The Social Network. But, ultimately, he ended up making what amounts to 23 Jump Street. But less funny.