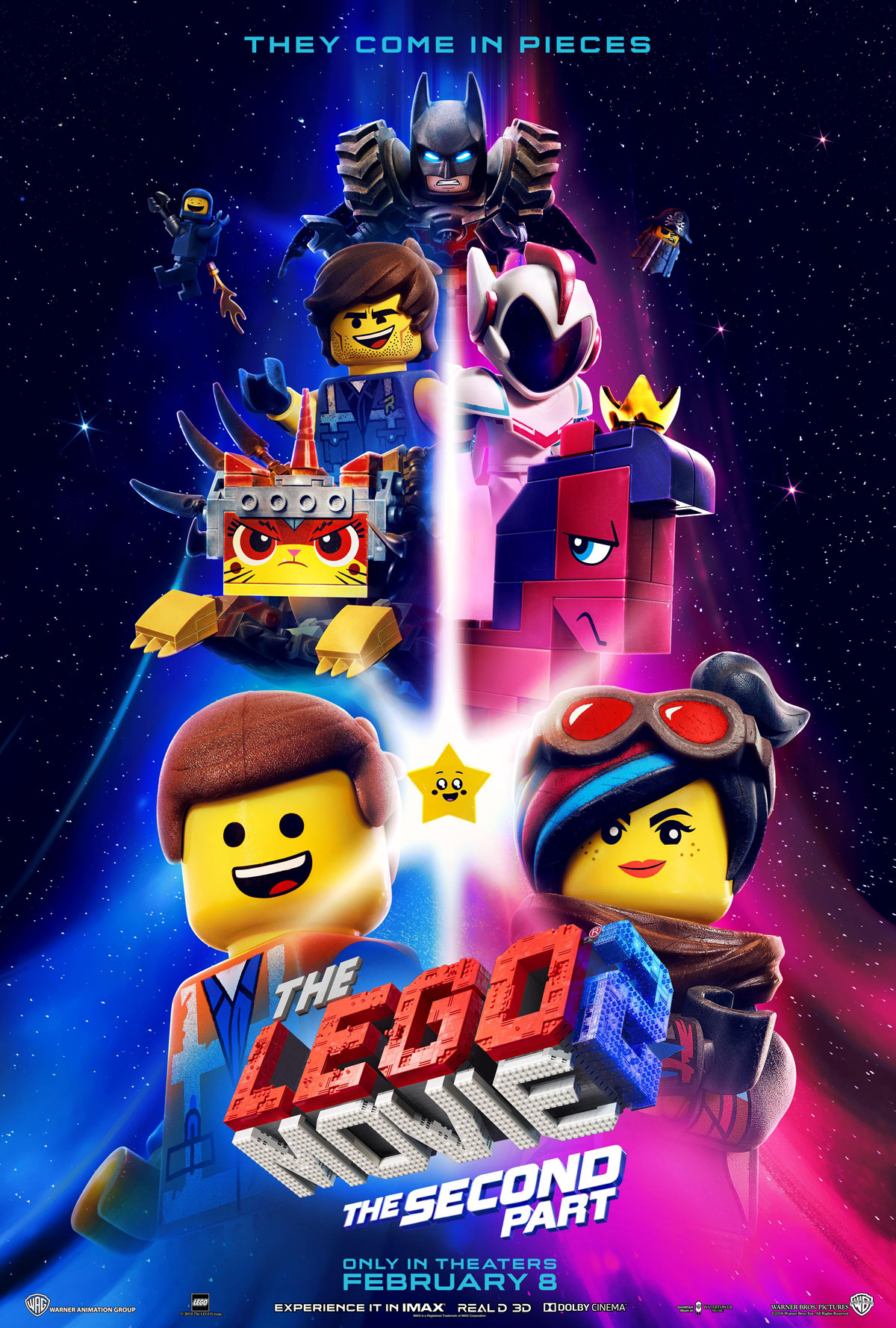 The Lego Movie 2: The Second Part

It’s always tough reviewing children’s movies. After all, these things aren’t meant for me. However, they are made for small-ish people like Hipster Jr. Jr. Though, after watching The Lego Movie 2, I’m uncertain if it was made for her at all. Or anyone for that matter.

I’ll start by saying that I found the first Lego Movie kind of confusing. Not like Dune or Star Trek: The Motion Picture confusing, but like messaging confusing. Are we supposed to work together and follow the instructions like Emmet or are we supposed to be individualistic, chuck the directions and build shit that doesn’t work? Are we supposed to be positive and love “Everything Is Awesome,” or are we supposed to be bitter and dark like Wyldstyle and think that nothing is awesome? The point is that I didn’t get the point. Or the message. Because it’s a kids’ movie, you know the studio said the movie had to have a message, but it felt like the creators of the film were either intentionally sabotaging it, or just couldn’t make up their minds which way to go. That aside, the movie was somewhat enjoyable — or at least watchable.

This second part tries to build on the goodwill of an original film that is somewhat cynical at its core. After all, this is a movie about plastic bricks sold by a company that sells hundreds of millions of the things a year, and certainly sold a shitton more after the success of the first film. In fact, I’m pretty sure we have a Unikitty upstairs somewhere. This one cranks up the sell job and ends up feeling like one long commercial that is short on plot, short on humor and long on telling kids that you’re never too old to play with their product — which is in stores now!

But, seriously, it felt like at times they weren’t even trying. The narrative has something to do with Duplo (the larger version of the Lego product meant for younger kids) aliens kidnapping some of Emmet’s friends to take them to some place with a queen who wants to marry one of them or something. The reveal in the first movie is that everything going on in the Lego world is actually tied to the real world and a son’s relationship with his father. It’s super hokey, but it rounds out the narrative and bolsters the plot. This one takes the same tack, but exposes the real-life bones early on and continues the silly fight between brother and sister as the conflict in the Lego world, shoehorning these two parallel plot lines in a way that feels like a retread from the first film. Although in the first film, it’s the reveal that sells it. Here it just feels like a lame contrivance. Especially considering the age of the brother. Having had a child of that age, he wouldn’t give a shit about his baby sister wrecking his Lego creations. Or Legos for that matter. I know it’s more about their relationship and less about Legos, but their bonding over the bricks is what makes this thing feel like this was a script that ran through the marketing department.

Hipster Jr. Jr. looked bored for the entirety of the movie. Quite frankly, I was bored. The attempts at appeasing parents with some inside jokes weren’t funny. The pop-culture references would go over most kids’ heads and weren’t amusing to someone who generally enjoys a pop-culture reference. It just felt like someone at the studio and, like I said, in the Lego marketing department was thrilled to make this thing, but that everyone else involved was just out of ideas. It’s all ironic, of course, as the idea of Legos is that you can create anything. You can build worlds and scenarios and personalities galore. But instead of expanding on things and making it broad or even interesting, they made it insular and kind of weird. And, look, I understand that I’m not the target audience for this, but in some ways I’m totally the target audience. I’m the one with the car. I’m the one with the credit card. I’m the one who gets to skip by this thing when searching for something to rent when it comes out on streaming. Hipster Jr. Jr. can ask, but I have the power to say “maybe there’s something else you rather see?”