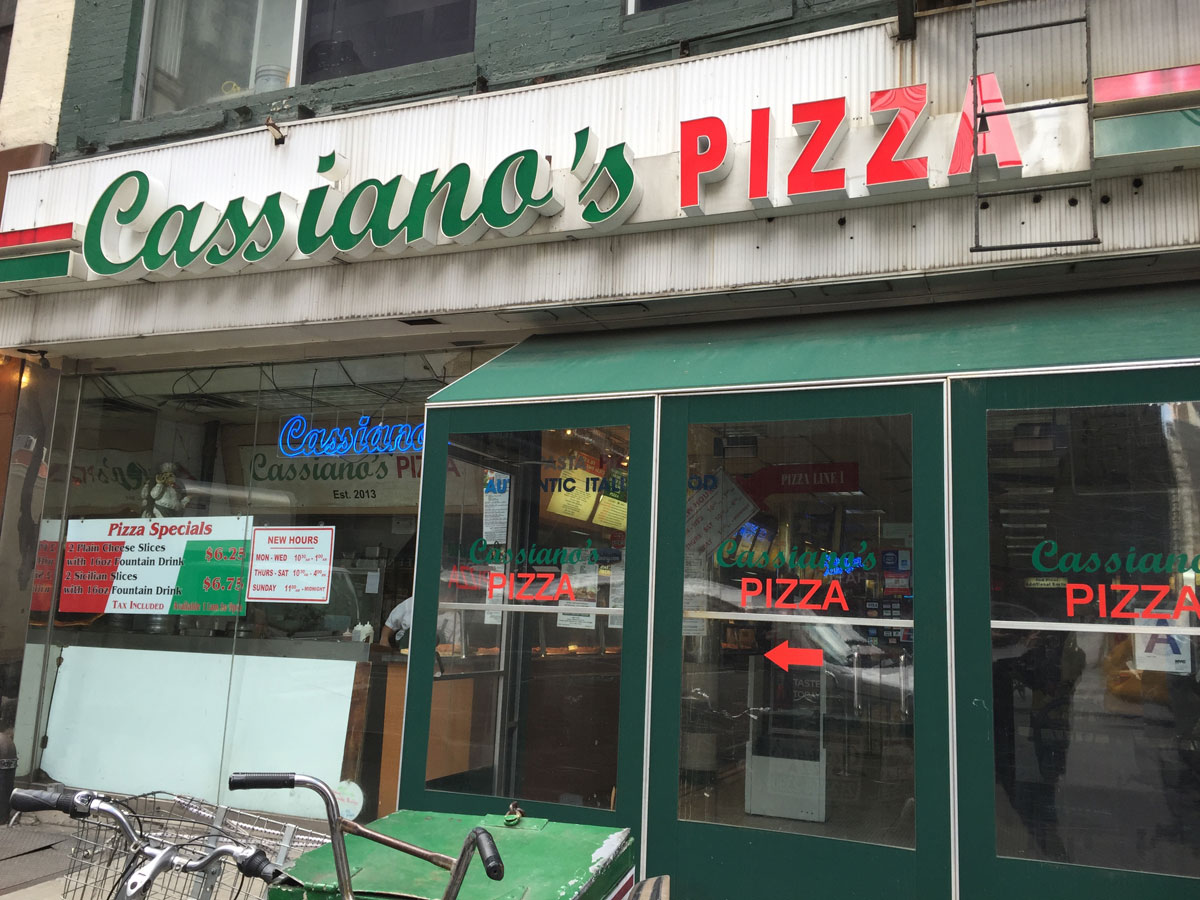 There was a time when Manhattan was stuffed full of these neighborhood pizza joints. For instance, mine way back in the day was Arturo’s up on 85th St. They generally have slices behind glass, are less interested in cleanliness than efficiency and, after a while, recognize you and what you generally order. Again, one slice pepperoni. One slice mushroom. Cassiano’s presents as one of these types of places, but the location smack dab in the middle of Midtown East workville unfortunately for them means higher scrutiny and expectations from an audience with a growing number of higher-end options.

And this, I imagine, is what has led to the decline in the pizza grease pit industry. Midtown drones used to be perfectly fine stuffing slices of pizza into their faces while standing in front of a mirrored counter. They’d sweep their ties over their shoulders in order to avoid grease stains and just watch themselves go to town. But times, and tastes, have changed. Enter fast casual. Enter a greater focus on health and well being. Enter the era of dudes actually eating salads. I know, it’s shocking that we’re only a couple decades removed from salads being for dieters and sissies.

So in the time of every manner of ethnic, build-your-own Chipotle, chopped greens and gourmet sandwiches, Cassiano’s is a dinosaur. Not only its business model, but its decor, attitude and just general existence. It definitely follows the model set forth in the 70s and 80s of no-frills pizza slinging, which comes along with stained ceiling tiles, hand-hewn signs, inconsistent soda fountains and service with the minimum of smiles. After all, in 1983 this — or places like it — was probably the only game in town. Suit dudes probably lined the block to have a couple slices thrown at them so they could gobble and run. They cared not about the weirdly dim lighting, the temperature of their food or the gruffness of their counter dude. It was that NYC charm that, in retrospect, wasn’t all that charming.

I’m done with the fake-ass history lesson. After all, I was only a cross-country visitor of NYC back in the 70s and 80s. It’s my dad’s family’s homeland, not mine. So I’m mostly just conjuring old memories of my sporadic visits and movies from the time. But, in the 2020s, Cassiano’s serves as a realtime time capsule of a bygone era. That all said, they still serve pizza. And people, including me, sometimes want that. And theirs is just fine. I mean, I only went there when I was absolutely starving, so they probably could have slathered sauce on the box and I would have been happy. The last time I was there a shouting match did erupt between a seemingly insane customer and one of the workers, which just added to the aforementioned “charm” factor. It didn’t affect the taste of the slice, of course. It was sustenance. But if I had the time or the energy I would have definitely done something different.