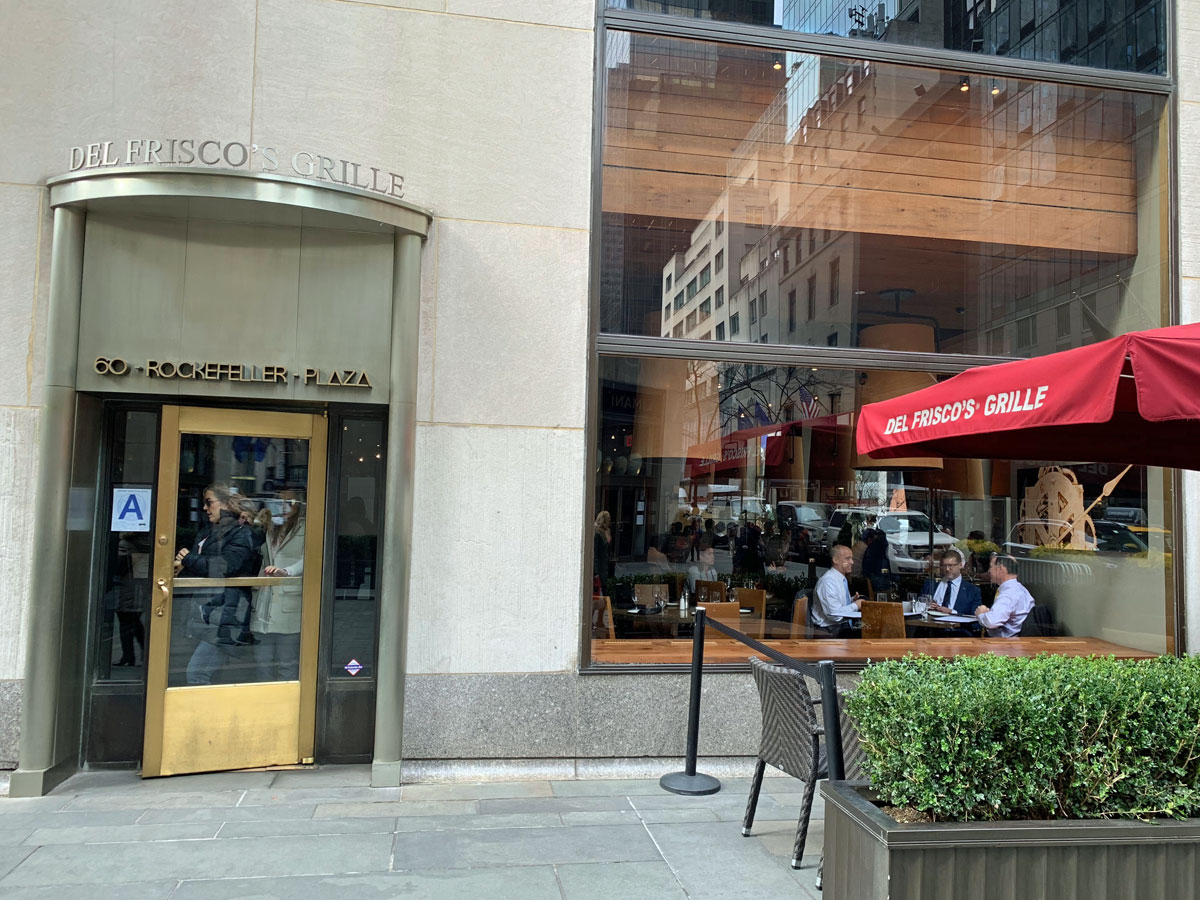 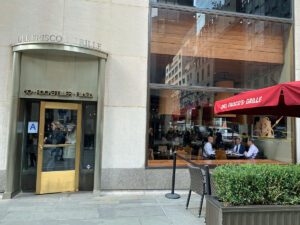 Look at me, I’m a fancy suit-guy lunching on the company dime! Or like a German family dining on their personal 10 euro cent coin. Either way, this location, smack dab in the middle of Rockefeller Center, couldn’t be less cozy or unique. I mean it’s not as though every joint needs to be some bespoke experience in a cozy pre-war building in the East Village, but these relatively soulless corporate feeding and drinking spots certainly aren’t there for any other reason than to attract Amex card meals, clueless tourists and post-work drinks with your manager’s expense account.

That’s all to say that there’s absolutely nothing unpleasant about Del Frisco’s. The interior space is one of those high-ceilinged, tall-windowed affairs. The better to overlook the marauding hoards of tourists. It’s full of rich-looking wood, some vaguely 90s styling and some awkward tiered seating and stairs and whatnot crammed in there to maximize seating space. Despite the natural light, it still somehow seems dark in certain sections. The whole thing gives off mid-level hotel chain restaurant vibes.

The two times I’ve been here, we actually sat outside. One time it was nice. The second time I thought our umbrella might blow into the ice rink and my face might fall off. But I’m a notorious wimp when it comes to weather, so it was probably way nicer than my telling. Whatever the case, we were there after work and someone else was paying. I’m sure I got whatever was the most interesting beer on the menu (which I’m also pretty sure wasn’t interesting) and my co-workers most definitely got some sort of pink wine. They definitely got the $26 charcuterie board, which, once again, is filled with stuff I don’t eat. Well, I eat cheese. So I’m sure I did eat that.

And then some asshole ordered a $15 iceberg lettuce wedge. I mean, what the actual fuck? Who does that? Lettuce is not for sharing. And I’m sure that’s exactly what this person intended. It comes to the table and she’s like, “Oh, would anybody like some wedge?” And we all look at each other like she’s just called our dog fat. I kind of wanted to be the jerk to say yes and then like grab a steak knife and hack off the top. Some people, man…

Anyway, you’ll most likely never come here for one of their very expensive midday meals or $60 steaks. Because there are about 2000 places in the city that are more interesting, if not just plain better. But if you want to impress that aunt and bring her for a glass of vino near the NBC store or something, this probably will do the trick in a pinch.