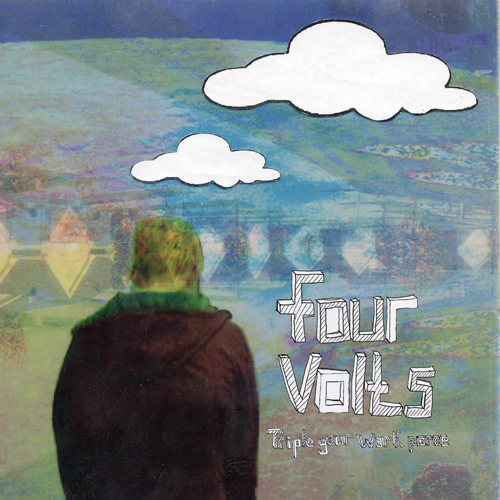 Sometimes you just want your rock ‘n roll loud and sloppy and somewhat irreverent. Who cares if you understand a word of it, or if there aren’t any Eddie Van Halen two-handed guitar solos or dreamy, spiraling crescendos? In fact, even when it’s not exactly clear the band quite knows where it’s going or how that distortion pedal really works, things can turn out pretty damn swell. Such is the case with Four Volts, who put together an album that starts its first song sounding bizarrely like an old Elastica song, but move quickly into a mash-up of The Replacements, Titus Andronicus and Love and Rockets. Yeah, you heard me right: I have no fucking clue what I’m talking about. I suppose they’re so hard to nail down, and I mention this wide range of musical styles, because they manage to cover all of these areas while still sounding original and fun. They do definitely go into that sloppy punk 50s thing on occasion, but instead of getting super-simple, their songs get complicatingly sloppified. Drenched in fuzz and echo (like they’re playing their local school gym) these guys bring an oldey-time feeling of punk-influenced modern rock that makes me extremely nostalgic and happy.