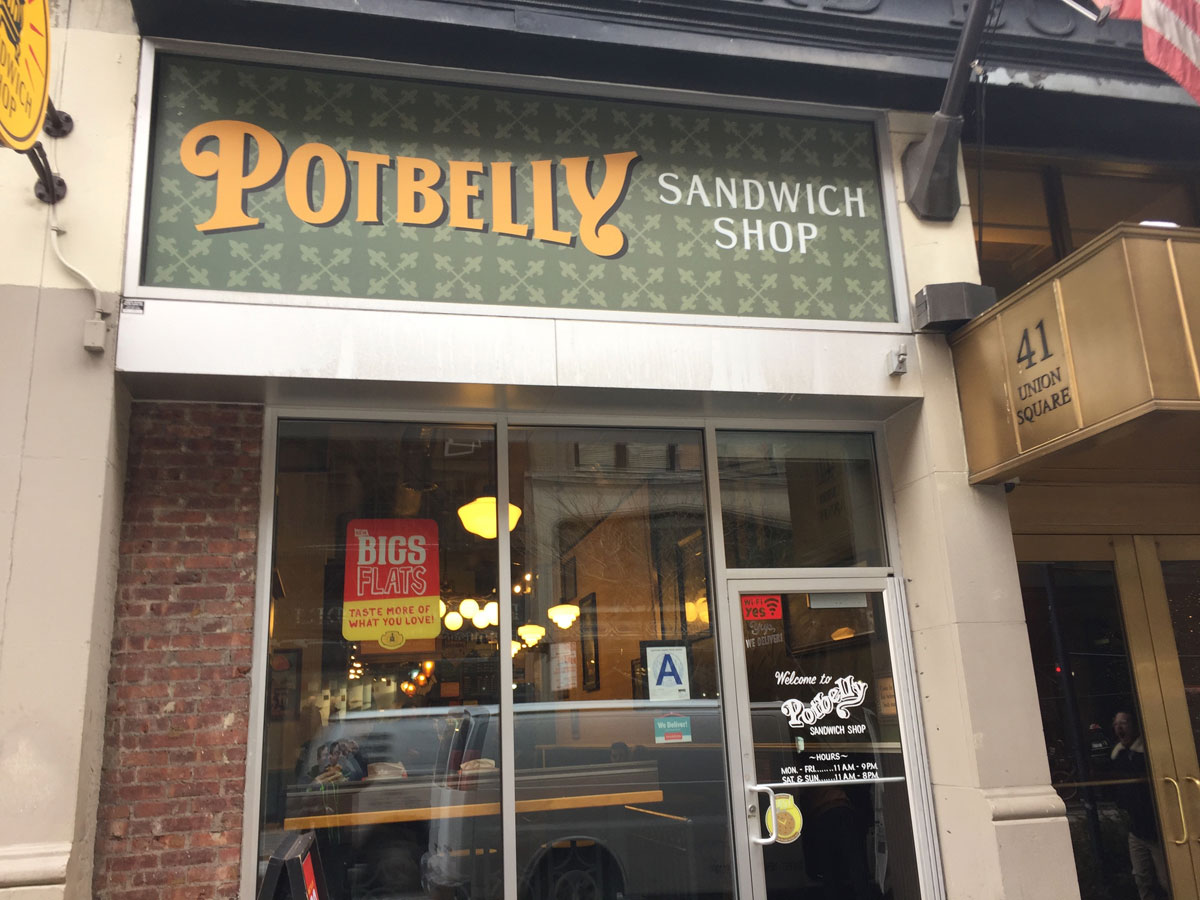 First there was Quiznos. Then there was time and space and weird ads and failure. And along came Potbelly to fill the void in the toasted sandwich revolution. Fuck Subway and their stupid un-toasted bread! But, seriously, toasting a medium-okay meal makes it at least 40% better. Just ask my panini press. No more lame, boring tuna sandwiches for me. Nope, I’m a toasted guy all the way. And Potbelly is my safe space. Even if the sandwich that goes into that conveyor-belt toaster is probably no better than any other Blimpie or whatnot.

What Potbelly does offer at this location is something not-generic. It doesn’t feel and smell like a faceless franchise. The space itself is kind of the catalyst here. A long-ass space with high tin ceilings, old-fashioned wooden tables, brick walls, concrete floors and some Space Invaders mosaics for some reason. It’s a bit odd, but endearing in a quirky way. But, honestly, who really cares about the space when you’re just buying a turkey sandwich? I’m not like settling down for a steak dinner or hanging with the boys for some beers. So it really comes down to the grub. Which, in the case of Potbelly, relies more on texture than it does on taste. Which, when you think about it, is the differentiating factor for most of these mass-produced sandwich chains. Turkey is turkey.

So you have your turkey, your swiss, your tomato, your lettuce and your onion. And maybe some honey mustard. And they stick it on this very manageable loaf of bread. Manageable in that it’s really easy to eat after it’s toasted. The thing kind of constricts into this crunchy morsel. In the best way, of course. It’s like dense, but not at the same time. And the bread actually tastes like bread, not whatever sugar-infused bullshit Subway hands you. Anyhow, the mixture of the warm bread, just-warm-enough cheese and cooler condiments makes for a great first bite. It’s crunchy, but creamy. Warm, but also cool. Why would I wax poetic about a stupid sandwich? Mostly because it’s been a minute since I’ve had one and there is some nostalgia at work. And I’m just a texture guy at heart. And it’s really that factor that puts this above the other sub chains for me. You know, since Così, and their crack-like salty, chewy flatbread, mostly packed it in.