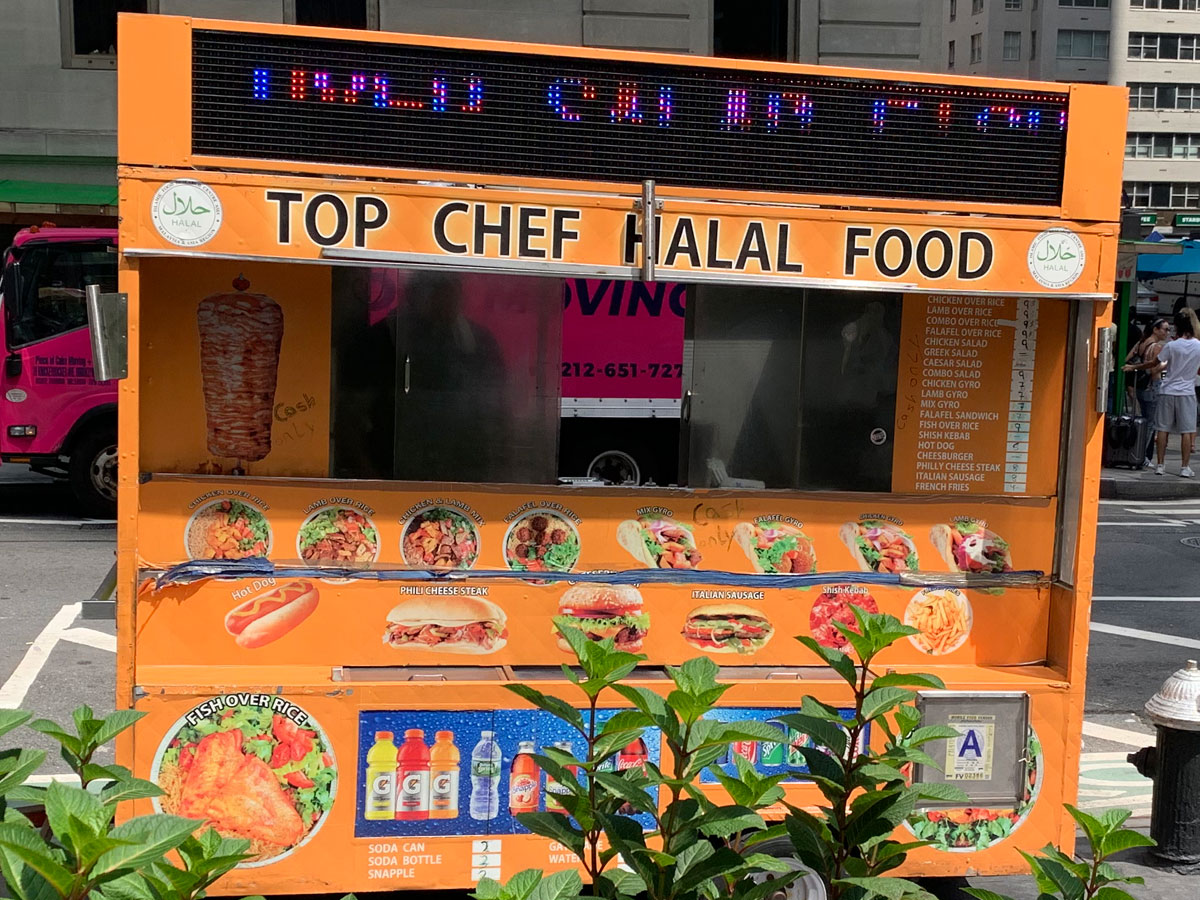 Look, you can have your Halal Guys. That shit is mushy and overly commercial. In fact, I only found Top Chef Halal Food because all the other carts in the immediate area seem to have been either taken over by The Guys, or are direct rips of them.

This cart, however sits right on the outskirts of their almost mob-like Halal rule. And the dude who runs it — whose name I probably should have gotten in my many trips there — is super-nice and seemingly gives discounts to “regulars.” Although perhaps the prices (listed at $9 for a chicken-over-rice plate) are just a suggestion rather than like a solid thing. I think I usually pay $7, which I suppose is a decent price. Even if there’s probably about thirty cents worth of rice and a dollar worth of chicken in the tin they send you away with. Not atypical, but I imagine the profit margin just on the food itself is pretty high.

Speaking of overhead… How does one pay for sidewalk space? That cart always seems to be in the same location. Does he just get there early? Or does he rent six feet of asphalt, paying a premium for a premium Midtown spot like this? I need a Netflix doc on this stat! Whatever the case, Top Chef makes it like I like it. The chicken isn’t all shreddy and soupy once you add the white sauce. The white sauce itself isn’t overly tangy or mayonnaise-like. Even though I know the shit is like 99% mayo. Plus, he’ll throw some hot sauce on top of the white sauce that won’t char your intestine, but gives it a little bite and enough heat to make it worthwhile. It’s actually tasty and not just incendiary like some other carts’ red stuff.

I could eat chicken and rice every single day. I could take that elevator downstairs, walk a few blocks and come back with a self-contained meal that is warm and satisfying and just makes me happy. But if I gave in to my worst impulses, my chair would no longer contain me, my co-workers would hate me and everyone would probably think I was crazy. Including Top Chef himself. So I save this stuff for special occasions. Like Wednesdays. Because this chicken, white and red sauce is my sanctuary.