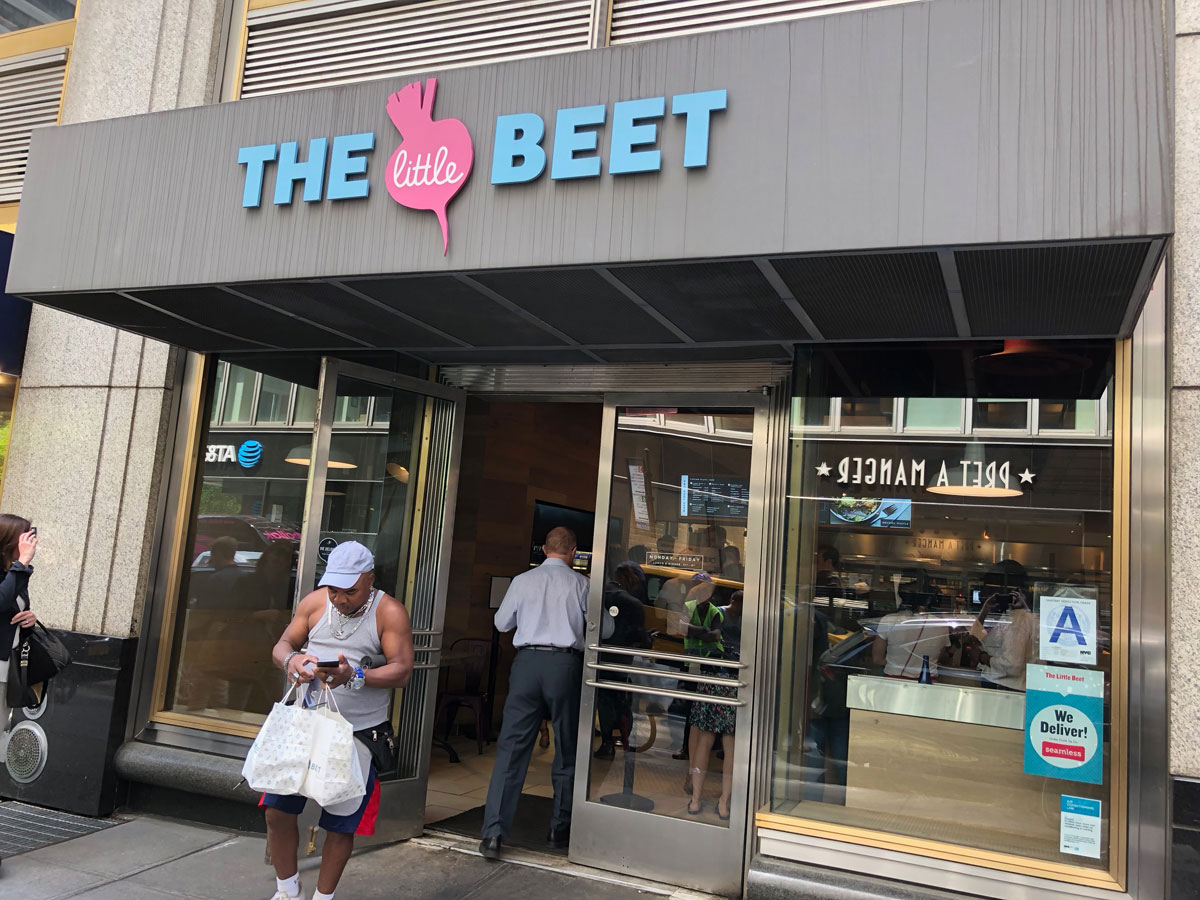 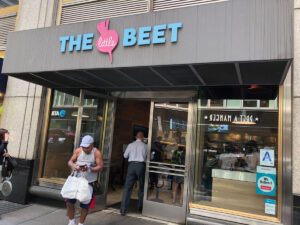 I feel like beets are controversial. They’re one of those love ’em or hate ’em vegetables. I’ve seen an adult male turn tail and run from this root veggie as if it were a skunk’s ass. So I find it interesting that this mini-chain would put all of its beets into this one basket. Even if The Little Beet isn’t even remotely beet-based. In fact, I think there are beets in exactly one side dish and mixed in with a falafel. But everything is otherwise beet-free. So don’t be scared.

Look, the “bowl” joint has kind of take over NYC food culture. Or midtown, lunchtime culture, at least. These “healthy” fast casual restaurants have especially won the day. The Dig Inns of the world. Which, quite honestly, The Little Beet is very similar to. But with like less taste.

I just do a make-it-yourself bowl thing here. I do the rice base, which used to have spirulina on it, I think. Besides being a cool green color, I’m not certain what that did for me, but they’ve now replaced that with “green herbs and garlic.” Which is probably a good move. And then the rest is literally exactly what I get at Dig Inn: roasted sweet potatoes with olive oil and sea salt and charred broccoli. Which is kind of where you realize that some places consider olive oil healthy, even if the food — like in the case of Dig Inn — is slathered in it. Turns out, oil and salt makes shit tasty. The Little Beet going head to head just doesn’t saturate their food with as much oil, and probably loses that battle because of it. They also don’t quite char their veggies enough. For my protein I always go with the roasted chicken. Here they lose the taste battle as well, as they seemingly use white meat and don’t season their meat a whole lot. Digg Inn uses what I imagine is thigh meat and, once again, they use oils and lots of herbs to make that meat sing. Even if you have to occasionally contend with some fattiness.

Where The Little Beet does win some points is the lovely pickled onions they’ll throw on top (and some super seeds if you’re into that kind of thing). Pickled onions are amazingly complimentary to just about everything. And then there’s sauce, which kind of thrusts the food forward. I do the turmeric tahini, which provides a nice pop of flavor and color to an otherwise just under-seasoned plate. All-in-all you won’t feel like a bloated p.o.s. after eating here, and they manage to make it just interesting enough to come back every once in a while to to drop probably too much cash for what you get. I will have to get the recipe for that tahini, though.