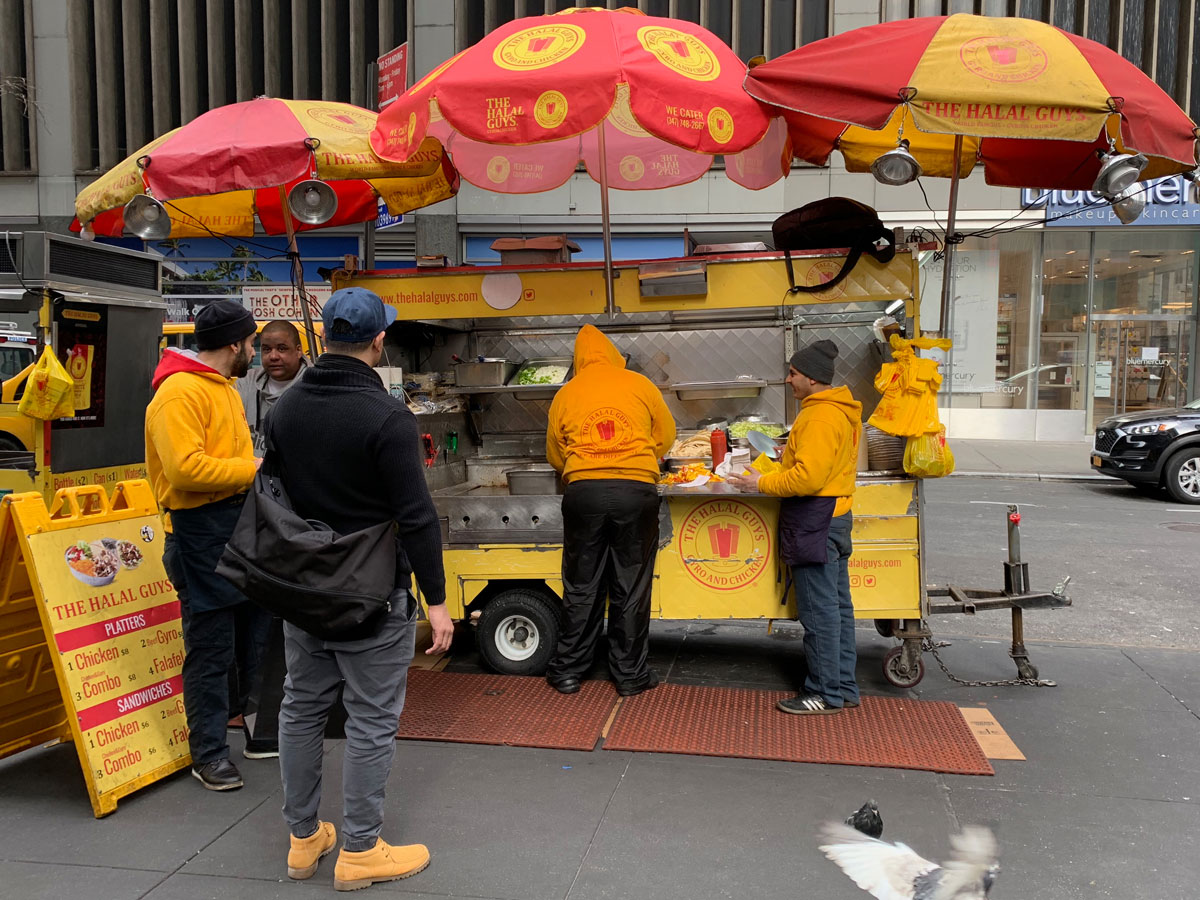 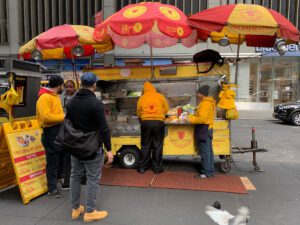 Sorry, I know this cart (which is now an army of carts) is popular and supposedly one of the best, but to me it’s straight garbage. Mass produced and inconsistent is not a way to build a following. Though, as far as carts go, this one has some sort of insane PR machine that keeps it constantly in the very small street cart media sphere and has snookered locals and tourists alike that it’s somehow the best the city has to offer in terms of Halal piles of chicken, rice and white sauce.

But let me tell you, it’s all bullshit. If you’ve eaten from as many carts as I have, you’ve seen it all. And perhaps this is a preference thing, but when you cut up your chicken in small, shreddy pieces and then put sauce in it, the whole plate turns into a pile of mush. And there are only two reasons I can think of that a cart wants to make their chicken this unrecognizable. One is that they can disguise how much protein they’re actually giving you. If you cut the stuff really small and spread it over a mound of rice, it looks like you’re getting more than you are. OR — and this is probably more likely — the poultry they’re giving you is of inferior quality. I mean, it’s easy to judge and see what’s going on when carts give you recognizable chunks of chicken. But when you chop it to hell and maybe mix in some cartilage and whatnot, it all kind of becomes more stew-like than something with toothiness that feels like you’re actually eating chicken breast (or even quality thigh).

And can we talk about their white sauce? I’ve witnessed everything over the years. I’ve seen thin sauce. I’ve seen sauce that resembles a yogurt-like raita. Everyone makes their white sauce a little differently. But, really, sometimes it’s the white stuff that makes the plate. But generally it’s decent and/or tolerable. The Halal Guys sauce on the other hand… First, it doesn’t come from a quirt bottle like all the other carts. They actually give you packaged sauce branded with their logo and name. And, let me tell you: you might as well squirt a giant packet of Best Foods on your food. Not only is it weird that it’s packaged, the consistency is way too thick and it essentially tastes like you’re getting a mouthful of slightly tangy mayonnaise. Straight up gross and unacceptable.

Anyway, my advice is to stay away from Big Halal, ignore the Halal Guys PR machine and find a solo vendor who has hung out his shingle and isn’t mass producing his food for the tourists and suckers. Meanwhile, I can literally see the line of Halal Guy carts from my office window and shake my head on a daily basis at the lines that they get to eat their mediocre, mushy product.