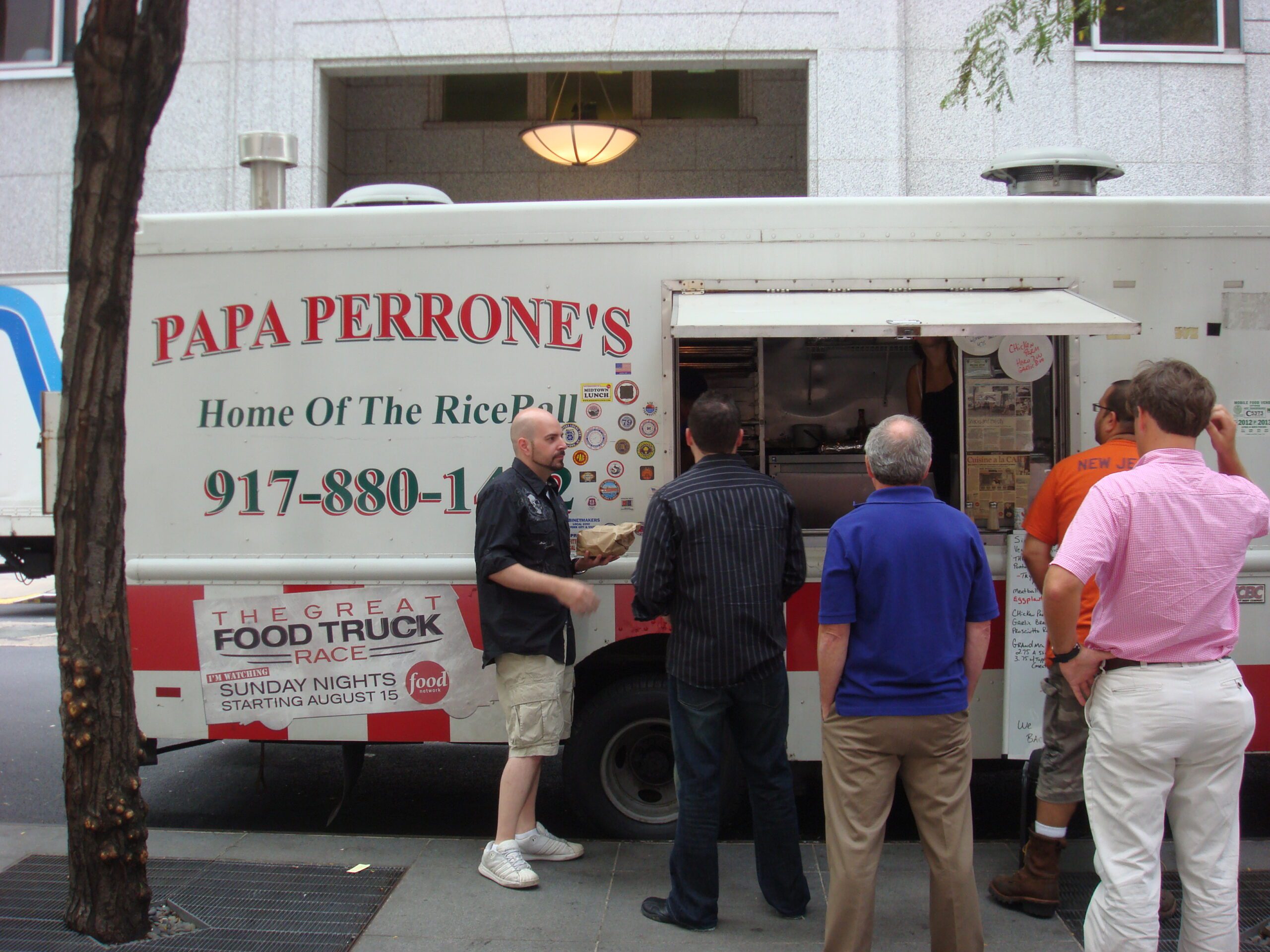 I grew up on a coast with no Italians. My only reference was the Godfather movies and Tony Danza. Not only did that narrow my understanding of Italian American culture to mobsters and whatever the hell Danza was, it meant a serious dearth of good Italian food. Californians–especially of the Southern variety–consider cheeseless pizza and sundried tomato everything the pinnacle of Mediterranean cuisine. And so I grew up with a bored, uninformed palate for just about everything, but especially Italian food. Now, being as disastrously dim as I am, I had never heard of a rice ball in my life before hearing about Papa Perrone’s truck parked a mere half block from my office. I still have my doubts there is anything authentic or Italian about these things, but people swore by them. So one day, desperate with hunger, I tromped down 55th street and lined up for my first famous rice ball. I figured I’d go all out and order the one with meat in the middle. What kind of meat? Not sure; didn’t ask. One ball is four-something, so I figured it would be enough. After all, it looked to be a giant ball of fried rice in the picture. Turns out the thing is about the size of a racquetball and they purposely squish the thing when they load it in the container (see photo to the left). I imagine that’s to release the steam so that it doesn’t scald your face when you go to chop it open? Or maybe it’s some Italian curse thing I don’t understand because I grew up amongst people who only thought Italians existed in movies and Formula 1 races. The ball itself was much lighter than you’d expect eyeballing its fried-looking exterior. And the “meat” they claimed to put in there weighed somewhere between a nano-ounce and a micro-ouce (if such things were to exist). The ball itself was relatively tasty, the rice cooked well, but overall a little on the dry side, but after finishing one I wondered if I was the only idiot who thought this would be enough to sustain him until dinner at 9:00? One would need at least two of these things to make a meal, and nine bucks for rice seemed a little steep–especially when I could walk another 40 feet and have a six-dollar delicious meal at Gamal’s cart. One that included rice and actual meat. Perhaps I got a runt, or maybe I’m just a cheapskate, but if I go back I’m bringing my calipers to see if this thing theoretically qualifies as a genuine “ball.” [MF]