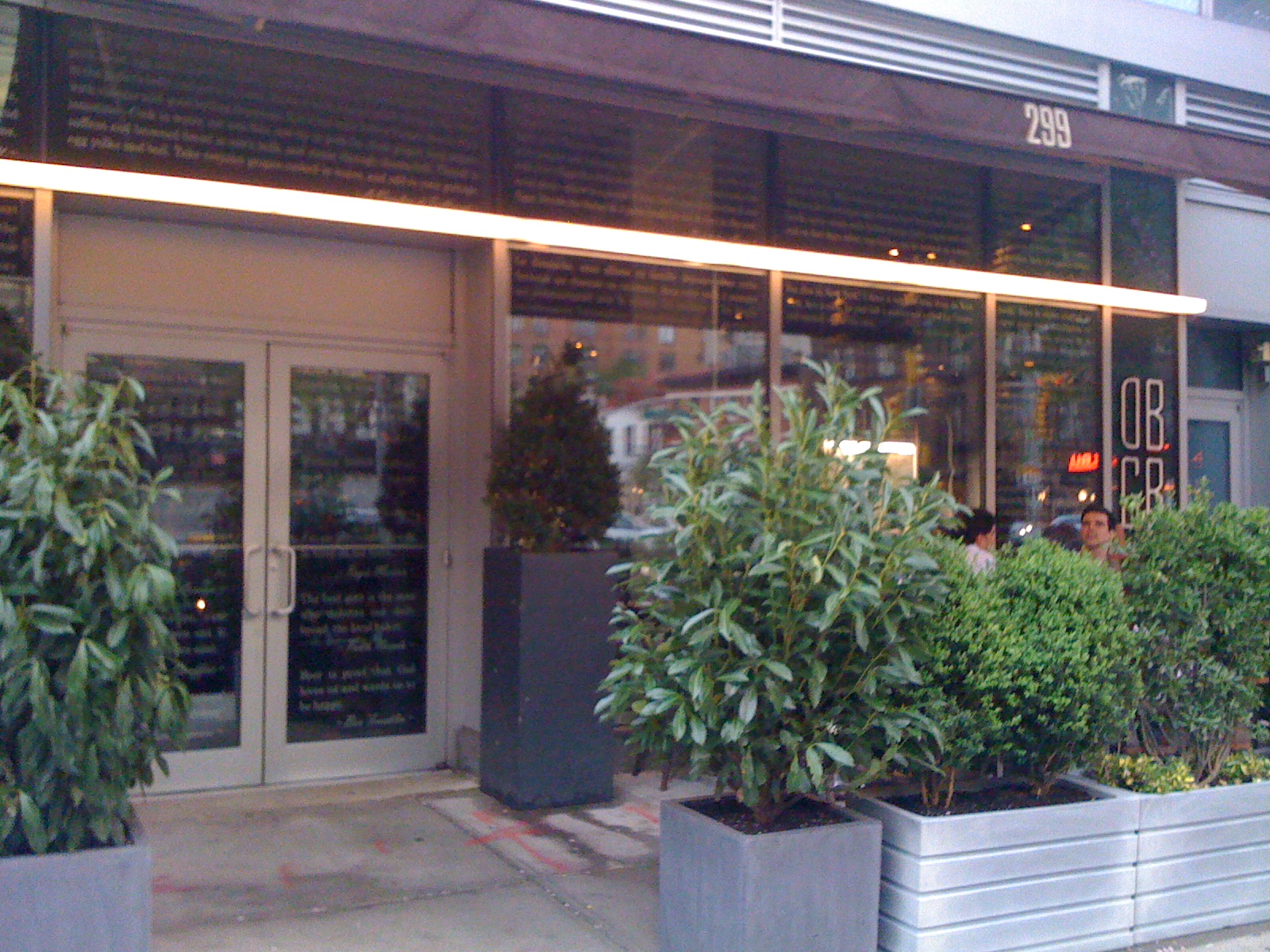 So my one experience with Mr. Baloud prior to going to this joint is dining in his flagship restaurant, Daniel. That meal might as well not even exist in the same universe as this one. In fact, the two places differ in just about every way other than the fact they serve food. First off, DBGB is on the Bowery. All you used to be able to find here were junkies and the needles they left behind. And, of course, the former punk mecca, CBGB, from which this joint steals its rather silly name. But instead of Blondie and the Ramones, you get yuppies and people like me (whatever I am) slumming it for an evening. If you consider walking into what looks like a fancified, dark-wooded West Elm showroom with its shelves lined with copper cookware and various glasses and foodstuffs in jars and whatnot slumming it. I suppose this design style is some sort of nod to the multitude of restaurant supply places that line The Bowery, but I’m kind of a dumb ass when it comes to homages, so it may just be some Baloud thing of which I’m unaware. Despite the open shelving and the cement floor, little touches like the hand written chalkboards (apparently this is a requirement any time French food is going to be served) and warm candlelight make the space comfortable and not quite as deafening as it seems like it should be. The menu, upon first inspection, seemed overwhelmingly delicious sounding, but my choices in retrospect could have been different and possibly more conducive to a kickass meal. My first choice out of the gate, matzoh ball soup, fell flat. I just couldn’t resist, but soon remembered that I’m not a clear soup kind of guy (I do love my bisques and chowders) and have had my grandmother’s matzoh ball soup and will probably never have better. The three others at my table ordered a bunch of sausage stuff, which I wouldn’t touch with a ten foot schnitzel, and all I needed to hear to know I was glad I avoided that shit is Ms. Hipster’s review of the blood sausage: “it tastes like a scab.” For my entree, I ordered the skate. There are two reasons I went for this: I pretty much always order the skate if it’s on the menu and it’s my first time at a restaurant, and there was risotto that accompanied it. Risotto, when done right, is fucking awesome. Like most soft white fishes, skate depends greatly on the sauce in which it’s cooked or is poured over it, but is a solid fish that when cooked just right wholly satisfies my love of texture. This skate was cooked nicely, but lacked anything interesting to flavor the otherwise mild, tasteless fish. The risotto was relatively fine, but wasn’t really the marquee thing on the plate, and as such wasn’t really concentrated on in terms of flavor concepting (to coin an awful phrase) and preparation. Again, looking back, I should have ordered something more daring. The desert, an incredible sounding combo sundae of ice cream, chocolate chip cookies, cocoa nib crunchies, caramel sauce and whipped cream, was remarkably blah for something that sounded like I should have been drowning in chocolaty goodness. Very disappointing. This aside, I did have a couple nice beers (a Jaipur English Ale and a River Horse Lager) and the atmosphere of the joint was lively and fun and our service was friendly, quick and helpful. I’ll admit when I order incorrectly incorrectly at times, and am willing to cop to the fact that sometimes my culinary reviews may be marred by poor decision making on my part. Granted, everything at every establishment I attend should rock my world, so until next time I’m going to lay this one directly at the feet of Mr. Baloud. [MF]