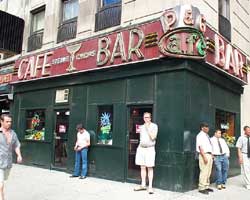 The first thing I though was, “Shouldn’t the beers be cheaper in this dump?” Seriously, if you’re going to charge five bucks for a stinkin’ beer, at least give us some couches, hot waitresses and a happy ending. I mean, if you’re place is going to be old school, you should charge old schoolish prices. Now before you get the wrong idea, I don’t hate this place. The crowd is not hip. To the contrary, the crowd is so unhip that it almost bends back on itself and makes the place hip. It’s like those lame trucker hats that every fool and his cousin is wearing–it’s IRONIC. You know, cool people hanging out in uncool places. Whatever your feeling on the whole thing, the P&G crowd couldn’t be more dull if you lobotomized a room full of mutes (or speaking impaired, or whatever.) There was one chatty, old drunk who insisted on telling the bartender about how to pick a horse. Best I could tell, you just stare at the betting sheet long enough and one of them jumps out at you like a pedestrian looking for an insurance settlement. While sort of deco on the outside, the inside reminds me of a bad, Long Island 50’s kitchen or something. I believe there may even be some fake wood paneling somewhere–although this might just be a phantom memory of some other dive I wanted to get the hell out of, and fast. Anyhow, we don’t want to sour you on what is a perfectly serviceable bar, but we can hardly recommend it to anyone under the age of 45 or with a penchant for falling asleep in his soup. [MF]