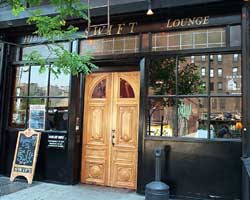 I’m woefully deficient in my knowledge of seventeenth century Irish authors. I think Jonathan Swift wrote some television miniseries starring Ted Danson as some giant or something, but beyond that, I’m at a loss. I can only assume the guy liked to drink and knew some Latin (Hibernia is the Latin name for Ireland.) Don’t worry, I’m not making any judgments about the Irish, only pointing out the fact there are like a million beer taps at this wacky pub. The large, curved bar would have made Swift proud. The tilted beer menus above said bar are a site to behold, especially when the floor is listing from side to side after one too many stouts. Something about the nice wood and soft lighting (and many beers) causes the crowd to appear relatively young and attractive. The way the pub narrows in the entry can bring about bottlenecks on packed, weekend nights, but the friendly, raucous crowd is only there to have fun and imbibe libations and will gladly make room for you to wade up to the bar for another. We’ve been here on more than one occasion where our vision and judgment has been impaired to the point of ridiculousness, but our hilarity has only grown when surrounded by the jolly drunks of Mr. Swift’s house of hops. [MF]