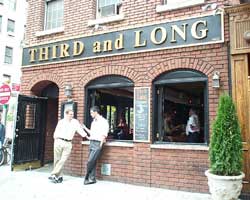 Drunk dudes rejoice, you have found the Mecca of cheap beer and fraternity antics. Okay, so it ain’t the place I remember squeezing my 22-year-old frame into in 1996, but it’s still around, the beer is still really cheap (like five cents a beer during happy hour) and there are still plenty of televisions on which to watch Syracuse claim the NCAA basketball national championship. Maybe this is why it reminds me so much of college, what with the drunken revelry, the dirt-cheap booze and, oh, a bunch of the same guys who used to throw beer on me in college throwing beer on me. While I probably wouldn’t go to this joint for a Saturday night on the town (its location is certainly a deterrent), I might drop by to watch the Raiders kick some ass on a Sunday afternoon–maybe picking up a little more of that mojo from last year. If you’re very young, very broke and willing to slum it for a night, this could be just the place you’re looking for. If you’re pushing thirty (or any age where you just don’t understand the whole Jessica Simpson/Nick Lachey MTV show thing), you may want to keep on walking and pay the damn five bucks for your beer and save some face while you still have some hair left and your own teeth. [MF]