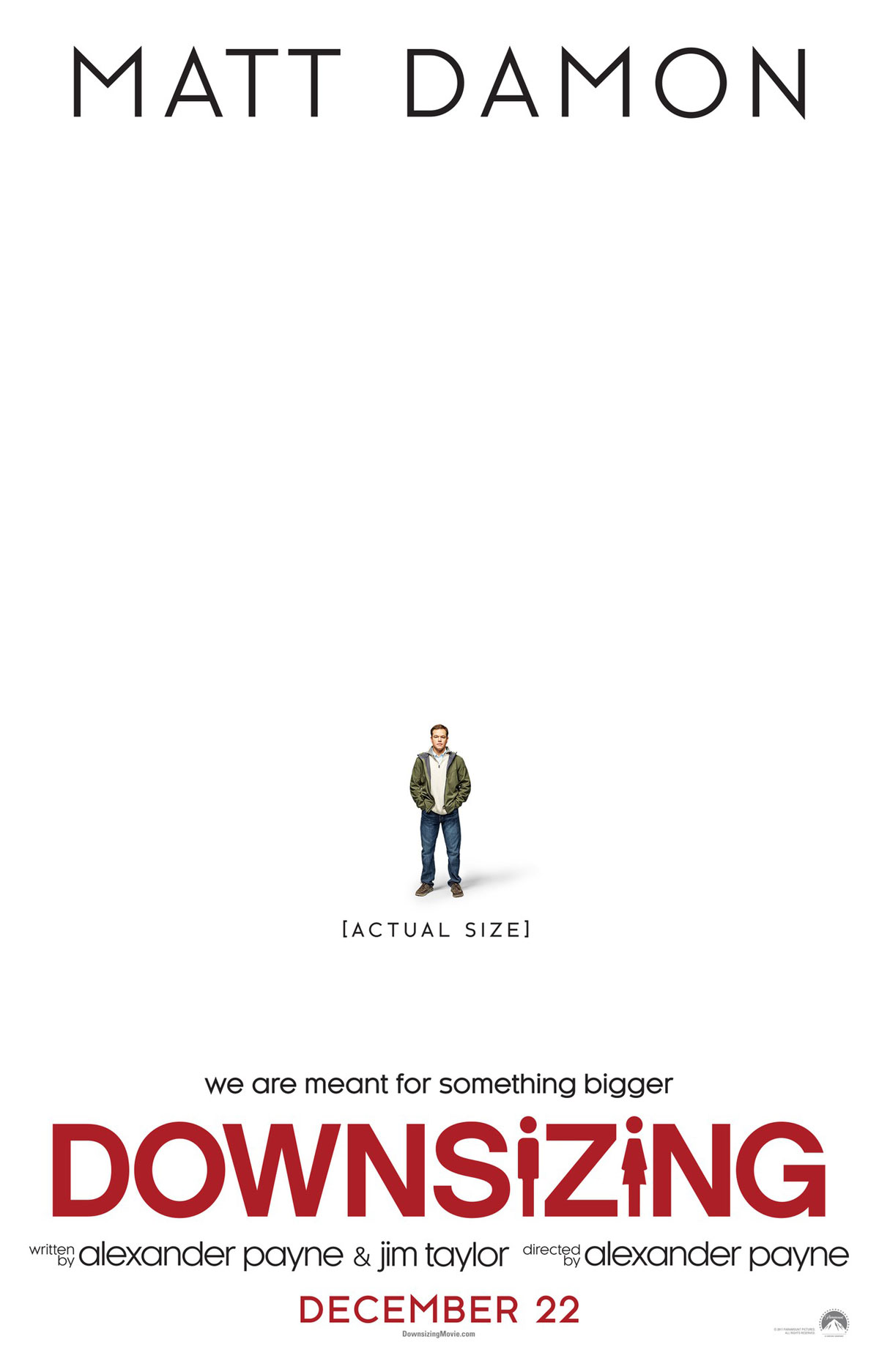 There was a time when I thought Alexander Payne was a genius. It seems that was mostly based on my initial reaction to Election, which was revelatory when I first saw it back in 1999. As far as I’m concerned, he peaked there and kind of slowly slid downwards ever after. And, yes, he went on to make Sideways, but while I seemed to really like it when it debuted a decade later, I don’t think it’s aged particularly well. Ultimately it’s all led to this, Downsizing, about 20 years on from his debut, Citizen Ruth, which was also pretty decent. And to even think that this is the same guy is kind of depressing, because this guy kind of sucks.

It feels like Payne wanted to make his Charlie Kaufman movie. Something outlandishly high-concept and surreal that said something bigger about society or human nature. And it’s not as if Payne doesn’t do movies about human nature. In fact, he’s made a career of it. But, while there may be some absurdist qualities to some of his screenplays, he really isn’t known as a conceptual guy. His stories, instead, mostly take place in his hometown of Omaha and are about the everyman — albeit the quirky variety. The films he has written and directed that don’t take place in Nebraska, like Sideways and The Descendants, are adaptations of novels that were written with very specific locations in mind that, funny enough, were as much a colorful part of the narrative as Omaha’s drabness is in his screenplays. Whatever the case, his films include a lot of talking and a lot of walking and a whole bunch of yelling. If there was a thing called spastic mumblecore, he’d be the king of the genre. Which is why it’s so surprising that he decided to dip his toe into this pseudo-sci-fi pool. And, boy, is that pool polluted with nonsense.

It’s the future. You know this because you know this, I guess. Matt Damon actually does start off in Omaha. In fact, he works for Omaha Steaks as an occupational therapist, taking care of workers’ sore shoulders and stiff backs from packing meat all day long. He’s a nice guy. He has a wife who seems relatively nice as well. But they are solidly middle-class and look to have a pretty swell, childless life. Damon is a bit of a khaki sad-sack, but that’s pretty much Payne’s cinematic archetype. The high-concept schtick is that some dude invented a way to shrink people down to a couple inches tall. And lots of folks are taking the plunge to live in little cities as baby-mouse-sized people. The advantage being that one can take a modest savings account and make a pretty bling-y life in a small community, considering you end up living in something the size of a doll house. Matt and his wife (played by Kristen Wiig) take a tour of one of the communities and decide to take the plunge. They have to say goodbye to their families and go out to the facility to have the shrinking thing done. Thing is, Kristen bails. He shrinks, she doesn’t. And so we’re launched into the even-sadder-sack world of lonely Damon. And it’s a drag.

We then spend a bunch of the movie watching Damon mope and have some sad dates and I think he takes drugs at some point at his neighbor’s Euro party. And then he finds his sorta calling helping out the less fortunate folks who apparently live in the elements outside of their domed Truman Show-like community. And the message is heavy-handed and kind of eye-rolling. And then they leave the community and the action becomes what feels like a totally different movie. And this movie sucks even worse than the other movie. It’s silly and feels as though it was written by a totally different human being. There’s lots of scenes that feel like a musical montage without the music. Everything about it just feels off. And then, mercifully, it’s over. Mumbly, low-key Damon has indeed found his calling. Though his calling is just a continuation of being a helpful person who is well-liked and satisfied by his work — just as he was when he was big and helping rotate his worker’s rotator cuffs in the meat plant. So, where is the growth? What is the point of this thing other than to provide some sight gags involving giant Absolut vodka bottles and over-the-top product placement? This thing was a total waste of time and effort. Even Damon seemed down about being in it — and he was in Hereafter!