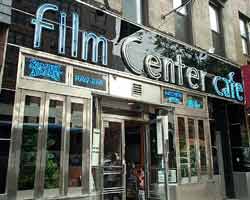 There is some sort of overwhelming sadness about this place. I can’t quite put my finger on it, but just sitting at one of the worn tables in this dark theme restaurant/bar brings on a sucking despair that can only be overcome with a nice Silkwood shower or decapitation. Dead movie stars stare out at you from grease-streaked frames as bored servers flit around in various states of drug withdrawal. I can’t be sure on the whole smack thing, but there has to be some excuse for the inattentive service. After eating my French onion soup, I almost wish our waitress had stayed tied-off in the bathroom, as it was more like gruel than soup. The turkey burger was like some spongy mass. Perhaps the prop-master from Dawn of the Dead was now a cook at this film-centric establishment, and was severely desperate to get back into the game. In any case, unless you like your restaurants tasteless and awkward, we’d steer clear of this joint and head on over to a place that doesn’t make a mockery of the wonderful industry that brought us Baby Geniuses and Gigli. [MF]