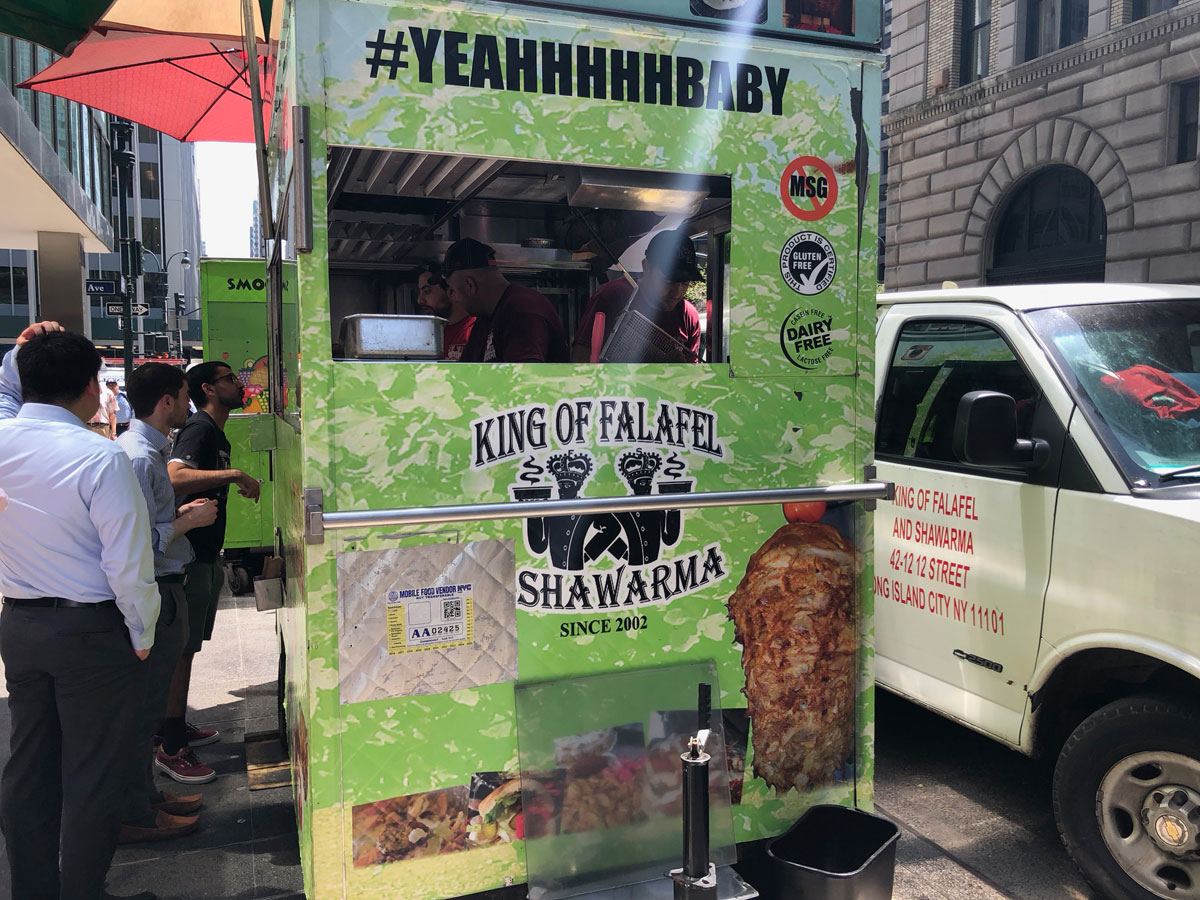 King of Falafel and Shawarma Cart

With Midtown East now littered with more Halal carts than roaches, the trick is finding the decent ones among the pretenders. The first thing you do is eliminate any of the carts advertising breakfast. And then any with the one of those stupid electronic billboards on top of it. Obviously you get rid of the carts that serve hot dogs, bagels or coffee. The only things that are acceptable to serve in your Halal cart are rice and some sort of kebab, falafel and shawarma. That’s it. If you see a burger, keep on walkin’. A chicken sandwich? Hell no. So, of course, if you see Halal royalty, you must stop and sample his shit.

Lucky for us, the king is right here in Midtown East, servicing the masses with his spicy balls and professional demeanor. His gimmick — besides his catch-phrase, #yeahhhhbaby — is that they walk the line of shawarma lovers handing out free football-shaped, falafel to entice people who already plan to buy their food to apparently buy their food. An odd gimmick to be sure, but one that engenders repeat business and perhaps a looser attitude about throwing that extra single into the tip jar. It’s a nice touch that extends to rest of the dudes in the cart, who believe in service with a smile and patiently dispense their brand of Middle Eastern fare to the hungry suit dudes on Park Ave.

I’ve gone for the shawarma pita and even the shawafel pita, which is just a pita that has both shawarma and falafel in it. It’s like frings (fries & rings) that they used to serve at Jack in the Box back in the 80s, but totally different. I also did just the shawarma platter, which is essentially an exploded pita on top of rice. The cart gives a sense of cleanliness that some of the others don’t give off. The guys seem clean, and they throw your food into a clean-looking tin and put it in a clean-looking green bag. They say we eat with our eyes, so all of this gives me confidence that may or may not be earned. The chicken is fresh off the spit, but it unfortunately suffers a little bit from the typical mushiness that some shawarma tends to do. I do so miss Gamal’s chicken, which was more chunks of white meat than the pressed stuff, but I know that shawarma can still have the toothiness that one would like in one’s meat, as proven by our friend Omar. It’s really not fair of me to compare The King with these others, but what are you gonna do? My guess, based on the fact Omar’s stops shaving their meat every 20 minutes or so to let it cook more, is that the rapid pace at which The King is serving the stuff doesn’t allow the meat to cook to the point it’ll have that nice crust on it and instead comes out a little flaccid. That said, their white sauce is decent and the hot sauce gives the stuff a nice kick, though doesn’t overpower. And the chicken is far from bad, and definitely rises above most of the choices in the neighborhood. Plus, the dudes are just so damn nice, it’s hard not to come back every week to get my fix.