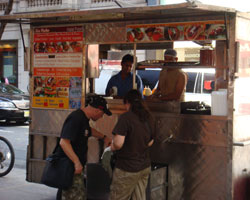 I can’t really be certain what the name of this cart is. There is no apparent labeling on the thing (aside from “Halal Food”) and all my Googling has come up with khara (Arabic for “shit”–or at least that’s what my Grandmother-in-law says). So I’m sticking with the generic “Halal Food” moniker until another, bolder, choice emerges. It’s not like I’m the king of the carts or anything, but I’m starting to make the rounds. I seem to be creating some sort of wacky concentric circle pattern emanating out from my office on 55th and Madison. This cart, a mere block away is only my third or so in my street meat tour, but certainly not a stop to turn one’s nose up at. Granted, it’s tough to really differentiate one carton of chicken and rice over another, but there are little things that identify this Halal from the other Halal. This one has red chicken. Yes, red. I imagine that has to do with some rub they stick on there (or at least I hope so) that contains spices and whatnot. Granted, the chicken is mostly dark meat, which can get a little gnarly if not properly prepared and might not be to everyone’s taste. They also serve a kind of long grain rice that is well cooked; not too toothy and not to mushy. I can barely steam rice with an expensive Cuisinart thing in my modern kitchen, let alone transfer it in a metal wheeled thing to a random corner in Manhattan and serve it to hungry Midtown workers for hours in the stifling heat. I’m certainly not going to lie and say this is the most popular joint (I’ve never seen more than one person here), but in terms of convenience, price and overall satisfaction, I’m going to give these guys a tentative thumbs up (with white sauce). [MF]