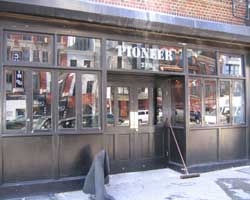 I’m a little torn on this one, as it was me and the Mrs. who brought our friends to this joint for a night of drinking to our being shoved out our mothers’ special places. Finding a joint with enough space for a crowd is a challenge in this city, and everything about this bar said “space” to us. And when the night started, we had nothing but. And then the kids came home to roost. What was a nice, comfortable evening filled with many beers became a struggle to stay afloat in a sea of humanity. I felt like a damn salmon swimming up stream as I fought my way up to the large bar. Of course I didn’t shoot any caviar out my ass or end up a dried out carcass on the banks of some mountain river, but I did almost get thirsty at one point when the ice in my Ketel One and soda ran its course. The space itself seems as if it could never fill up, with its soaring, warehouse ceilings and general cooled-out, industrial designed 3,000 square foot floor plan, but it’s amazing what folks will do for a drink. Despite the crush and the earsplitting stereo system, one of my pickier friends called the crowd “one of the most attractive I’ve seen at any place in the city.” That’s where my apologizing stopped. Getting my single buddies squished up against a chick in ass-pants is hardly a hanging offense, and something that I’m sure they’ll be grateful for in retrospect. It seemed to me that there were an awful lot of dudes there, but I swear I saw a couple pink elephants and a breakdancing leprechaun as well. [MF]