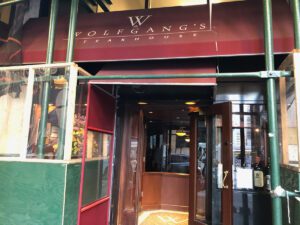 Its unassuming exterior belies the super-cool tiled ceilings, soft lighting and dark wood found when you step inside this Park Ave. steakhouse. There’s no doubting there is some serious cow being grilled here, as the air is heavy with the smell of meat. It’s not all as disgusting as it sounds–more mouth watering, really. When our party arrived, we were seated promptly at a nice, round table in the far corner (optimal for checking the place out). Our waiter was pleasant and helpful, helping us navigate the steaks and various sides. We opted for the porterhouse for three, which, being the bottomless pit that I am, should have, honestly, been a porterhouse for two, and several sides, including hashbrowns, German potatoes and some other stuff. The sides were all delicious–and called by some the highlight of the meal–but I found the little, cut pieces of steak to be chunks of char-grilled excellence. I honestly found the steak here to be better, and better cooked, than the steak I had at Peter Luger. I know that place is some kind of old school sacred cow (pardon the pun), but Wolfgang did a good thing when he broke out of that place and decided to put aside rude service and crazy surroundings for credit cards, menus and properly prepared meat. Just relax; my stupid review isn’t going make Luger close or something! [MF]