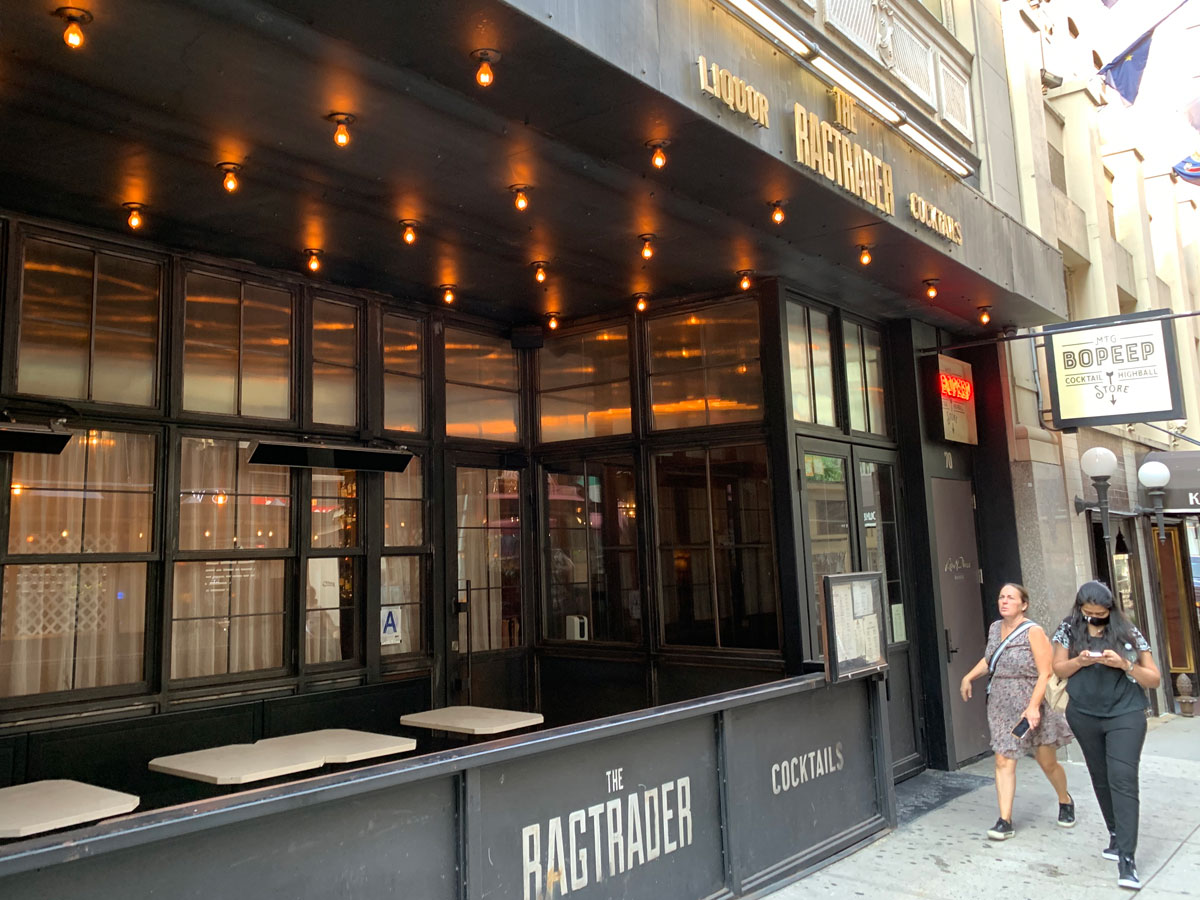 I have to say, this place is pretty cool. The Ragtrader (or, alternatively, The Rag Trader), so named because it’s built in what I believe is an old textile factory in the garment district, may sound like some gimmicky theme bar, but they did a really great job of melding the history of the space with that industrial poured cement, white tile, wood and Rejuvenation / Restoration Hardware chic. They took some serious care with the touches, the lighting and not ruining the historic feel of the joint by making it feel like a show room or sterile museum. They manage to inject personality with additional unique artwork and furniture that makes it feel like some cool person’s SoHo loft or oldey-time Upper West Side eccentric’s sprawling apartment. It all hangs together really well.

All of this is pretty surprising given its location on an otherwise non-descript block on the edge of Koreatown, or the Garment District or whatever you want to call this adjunct neighborhood. I suppose it’s on the way for commuters from Midtown to Penn Station if you happen to walk down the block (which I had about a million times before walking in), so it’s not entirely out of the way. But it’s also a pretty ballsy move to invest what looks like an awful lot of money in a ‘hood that is not exactly at the top of peoples’ list when it comes to destination locations. Granted, you do have the phenomenal Keen’s Steakhouse next door, but the rest of the street is filled with those weirdo, cheap micro hotels that sprung up in place of tenement buildings around Midtown West and Hell’s Kitchen. Not exactly the shiny neighbors one might want for your new, multi-million-dollar bar and restaurant.

A friend and I met here for some drinks, so we didn’t sample what looks to be a lovely menu filled with super-American fare. But upscale. I’m sure it’s delicious. But we came for drinks. You know, sidled up to the long-ass bar and surveyed the list of around fifteen beers on tap. I think it was meant to be a one-beer stop, but it might have turned into a two-beer, one-Manhattan hang. Not only because of the wonderful company, but because the place is so pleasant. And the bartender too. The whole thing was like a well-lit movie set. It was glorious, I tell you! Ok, maybe not glorious, but certainly a very chill time with our $9 IPAs and this wacky three-story bar that was probably built from the father-in-law’s sweatshop factory in Mrs. Maisel. So, yes, there are most likely the ghosts of criminally underpaid immigrant women haunting this incredibly decorated bar, where a single cocktail costs more than six months of their wages, but, hey, us modern men gotta live the good life while we can. Right?