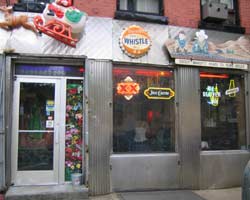 Imagine, if you will, a drunken, adult version of Chuck E. Cheese’s in which you’re the main attraction. Yes, it’s your turn to make a complete ass of yourself in what is possibly the loudest, most obnoxious bar on the entire island of Manhattan. Fortunately for us, the night we were there, we were the loud assholes just begging to get kicked out. The amazing part was, the waitstaff was getting into it–handing even the most tone-deaf of our group the microphone so he could drive the other patrons to absolute lunacy. Seriously, our behavior would have gotten us tossed from any other place in the city, as we spilled beers on the floor, screamed at the top of our lungs, sang horrendous songs horrendously and basically made a mess of the place. And yet they accommodated us. I must give them props for tolerating even half of the stupid crap they had to put up with–including one particularly surly member of our group who ended up threatening one the bartenders who he thought was making sour faces at us. The bartender ended up apologizing to our group member (despite him being completely out of line) and bought us all another round of shots on the house–something that we certainly didn’t need. The whole feel of this place is like a Tijuana bachelor party gone horribly wrong, with the red and green tinsel hanging from every available ceiling tile, and the general Texas and Mexican garbage nailed and painted on the walls. It actually looks like piñata threw up its innards in a nasty bout with the tequila monster. Food obviously isn’t the central focus here, but I seem to recall through my drunken haze that it was passable Mexican nosh–not anything I’d go out of my way for, but certainly good enough to soak up the gallons of Mexican beer and sticky, sweet frozen margaritas that are about as good a barfing jumpstart as you’re gonna get. While we had an awesome and memorable time here, I’m sure our fellow patrons has as bad a time as ours was boisterous, rowdy and fun. If I were one of them, I’d give this place two huge thumbs down and probably write to the mayor to have them shut the place for good, but I wasn’t so I shan’t. I guess it’s all a matter of perspective. [MF]