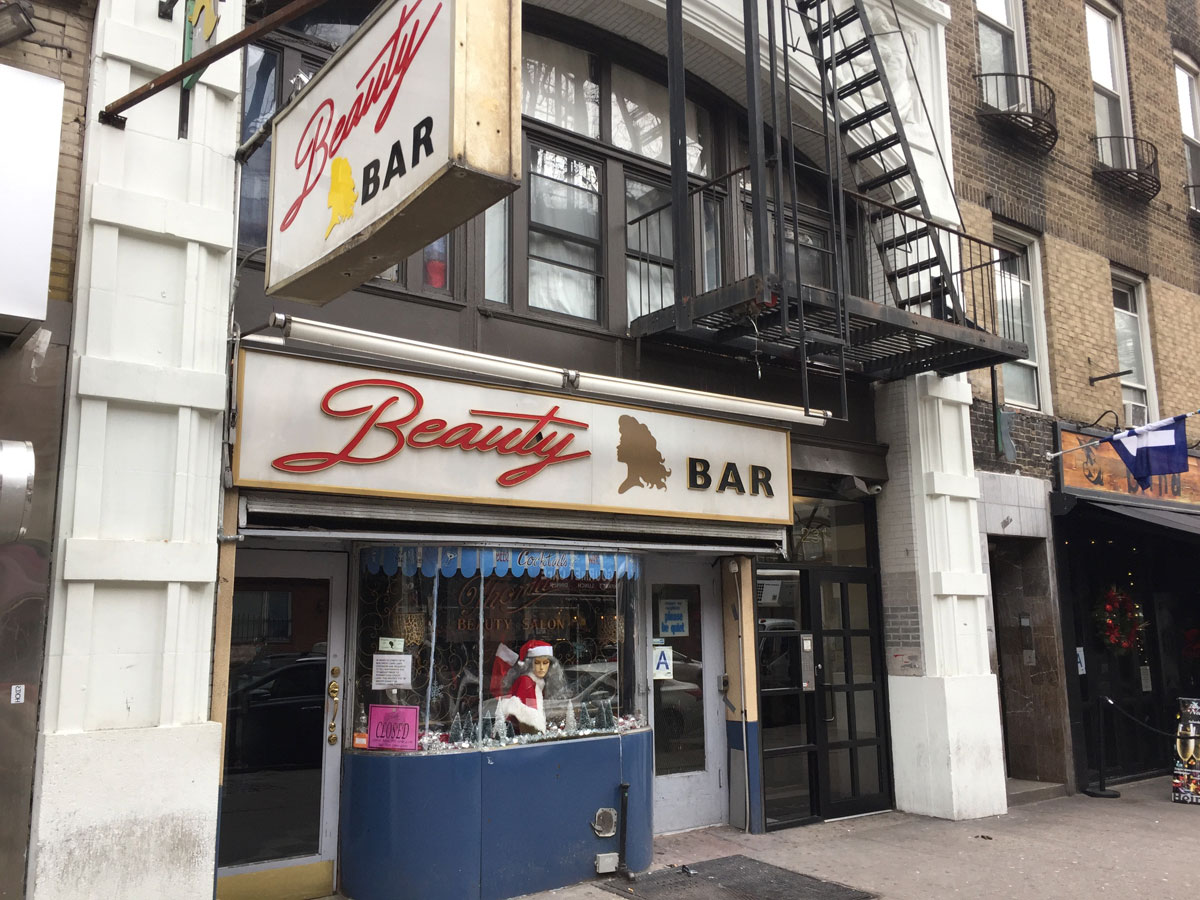 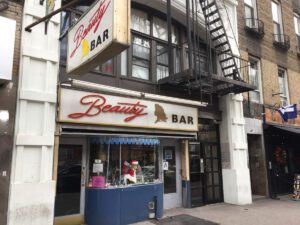 This bar originally opened at almost exactly the time I moved to NYC in 1995. Back then you could smoke in public spaces and beer menus mainly consisted of American macrobrews and a couple German beers in green bottles. Vintage clothing was still cool and so were sideburns. Chain wallets and roller blades. You get the idea. Well, Beauty Bar was also cool. As were all bars that had a vague theme around whatever the bar used to be (like another Deb Parker creation, Barmacy).

Back in those days the smoke covered up the smell of acetone or whatever other beauty products were being used to give the ladies their manicures. In fact, I’m not sure I ever even realized that was a thing you could do here. It was always so crowded, or else I was so inebriated, that I never looked around to see if someone was sitting getting her nails done. But apparently that little thing lives on to this day. You can get beautified and have a drink at the same time. I’m not exactly sure how that goes down, but it’s a thing.

Otherwise, this joint is a throwback to a time when overcrowded kitsch was a definite trend. Crowding your walls and shelves with as much shit as humanly possible was gave your place cachet. Or at least a look in the East Village and Lower East Side that said “Hey, we don’t give a shit about this place and neither should you.” Because caring was really fucking lame for us Gen X, 90s assholes. Vintage and second-hand was the shit and screw you if you felt different. And how to best show your love of all that is old (and vaguely dirty) than to pack every square inch of your place with old crap. That seemed to be the plan at least. What it really did is act like a giant sponge for all the smoke and probably made the space ten times as stinky as it needed to be and most likely accelerated the lung cancer in the bartenders working in these shabby conditions.

Anyhow, looking at current photos of Beauty Bar, it doesn’t look like much has changed. The black and white floor, the striped walls and all the old hairdryers and barber-like chairs lining the narrow space. I seem to recall dancing in the back room before the cabaret crackdown came along, so I’m not sure if that still goes on (or if the millennials even believe in that kind of stuff anymore), but it was super-hopping back in the day. This all said, Beauty Bar isn’t really somewhere you come to hang for the night. It’s a fun joint to bring your out-of-town cousin to for a drink because it’s weird and different. Or maybe if your little niece wants a cheap manicure and a hard seltzer or something, you could drop in to get that done. But like most theme bars, it’s somewhere you come once, gawk at the funny shit on the walls, maybe grab a relatively cheap cocktail and then make your way to somewhere that is more comfortable and doesn’t smell like the smoky ghost of what used to be the 90s.