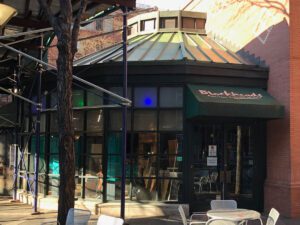 In the low-rent world of Mexican food, I suppose this could qualify as upscale. Now, that’s comparing it to Chinese/Mexican joints like Taco & Tortilla King, not Rosa Mexicano. Okay, let’s qualify it as upscale take-out Mexican food. Don’t let this scare you, as you can certainly still get out of here for under ten bucks. A direct chain competitor with Burritoville, Blockheads takes a more forced Tex/Mex/Caribbean approach to their food; combining cuisines, with things like Texas brisket tacos and Jamaican jerked chicken and Havana chicken burritos. While it may sound kooky, it actually works reasonably well mixing things up, and separating itself from the pack. Of course, some things work better than others, but I will vouch for the tastiness of the BBQ beef tacos, which are built double-decker style–a hard shell spackled with refried beans, and surrounded with a flour tortilla a la Taco Bell–and really combines a nice blend of tastes and satisfies two cravings at once. This location, in particular, isn’t much to look at. It’s honestly not much more than an atrium with some awkward tables strewn about, but it is part of a larger outside area, which is very pleasant on a nice, sunny day. We would suggest not wearing white pants, however, as two co-workers on two subsequent visits ended up with strawberry margarita on her nice culottes. So, if you’re looking for real, authentic Mexican food, we’d suggest you go elsewhere, but there are certainly some things on Blockheads’ menu that make it seem that this hybrid thing ain’t such a bad idea. Odd, though, that they’d name a Mexican joint after a couple characters from Gumby. [MF]