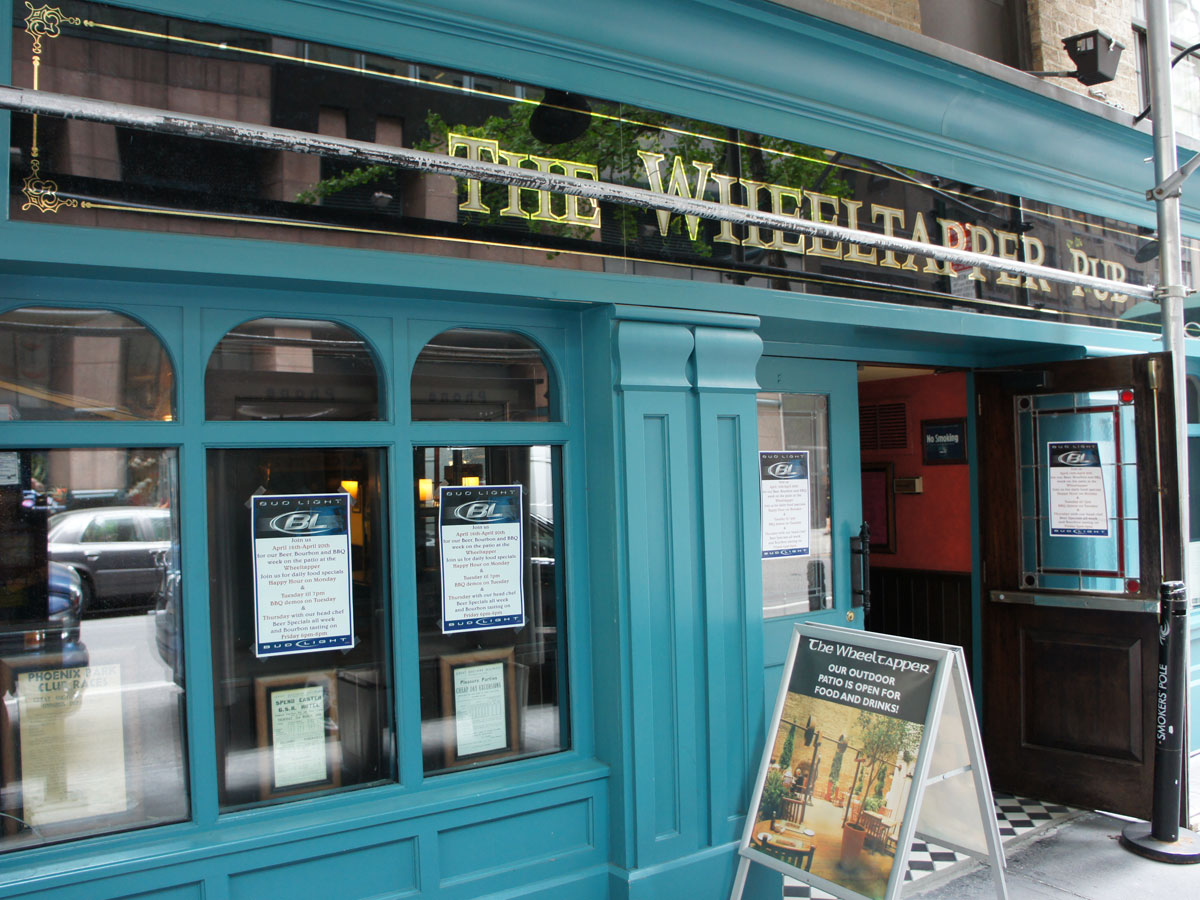 The Wheeltapper must have been concepted in that era in the 90s when the theory was that the more shit you put on the walls, the better your Irish pub will be. You know what I’m talking about. Stick up a million Guinness signs, antique whatnots and tchotchkes out the wazoo. All over the place. Everywhere. All the time. On every surface. Sometime the places had no theme, so the joint was just random detritus. Or, like The Wheeltapper, there is a very rigid theme that the joint just leans way the hell into. Even when that theme — in this case “the wheeltapper” — is nothing anyone knows or cares anything about. Because, people, a “wheeltapper” has something to do with railroads or train wheels or something, I guess? Why a train wheel theme you may ask? I had no clue until I looked at a map and realized the pub is relatively in the vicinity of Grand Central Station, I guess? You know, where trains go.

What that has to do with this hotel bar and its Irishness is beyond me. Maybe the Irish were traditionally the dudes who checked train wheels? That’s some research I’m definitely not interested in pursuing. Google away, fine people. My first thought in walking in is that perhaps the decorator and architect of the bar was blind? There is this bizarre mix of patterns on the floor, on the booths, on the bar, and this mix of burgundy and kelly green that makes me think they also Googled “Irish pub” and came up with a couple historic colors and decided to put them both in the same place. Unfortunate. But, who can blame them, really? After all, the bar is oddly dark. So, perhaps they weren’t blind so much as impaired by the dim. The shit just feels heavy. Which I suppose is fine for a late night drink. But is super-weird when you walk in when the sun is up. Say in the early evening in the summer between your office and Grand Central. Some might call it depressing. Some might call it… also depressing.

I’m curious about the order of things. Did The Wheeltapper appear as part of the Fitzpatrick hotel to which it’s attached? Or did they show up at the same time? Maybe we’ll never know. But, as the proprietor of a midtown hotel, I’m not certain why I’d create something so clearly built to house old-guy drunks. I’ve been to Ireland a couple times now. And even these heavily traditional “Irish” bars in cities like Dublin know that dark, crowded, music-less spaces attract nothing but ancient curmudgeons. If you want anyone under 50 in your joint, you have to lighten it up in one or more ways. If I were an out-of-towner staying at your establishment, I’d take one glance inside your restaurant and bar and just keep on wheeltap-tap-tapping my way down the avenue.