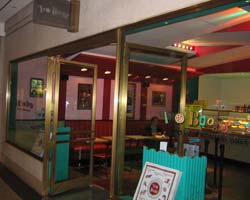 Mmmm boots. Wow, that steak tasted like and old boot. I think I’m gonna boot. I’m gonna shove my boot so far up your ass, you’ll be tasting leather. Yeah, not such great associations when your place is serving food. I’m sure I could plumb the depths of the vast World Wide Web and find the story of why this is called what it is–but speculation is so much more fun. Aw, screw it, I found it: the boots represent the geographical shapes of Italy and Louisiana. Um, okay. Saying Louisiana looks like a boot is the equivalent of saying California looks like a bottle of chardonnay. To me Louisiana looks like a wrecked 1970’s Oldsmobile or a manual meat grinder. I guess it’s just a matter of perspective. The other odd thing is this joint’s naming convention for their pizzas. They name the pizzas after random movie characters, entertainers, animals, etc. who, as far as I can tell, have absolutely no connection to pizza or Louisiana. For instance, I had a slice of the Tony Clifton (wild mushrooms, Vidalia onions, sweet red pepper pesto, and mozzarella) and a slice of the Mr. Pink (marinated chicken, plum tomatoes, fresh garlic, and mozzarella). One is named after Andy Kaufman’s alter ego, and one after a character in Reservoir Dogs. Great. Despite this kitschy lameness, the pizza is very tasty and flavorful in a way that no other pizza around is. In fact, it’s not really pizza at all, but cornmeal crust (that’ll chew the heck out of the roof of your mouth if you’re not careful) with spicy sauce and a whole bunch of topping crap. Like most pizza places in NYC, they keep a bunch of cold slices sitting around, and only heat them up when ordered. That may work for your typical pizza, but this stuff is more like brick oven, and really suffers for the time outside the oven. I’ll have to try a fresh pie sometime and see if it makes a difference. [MF]