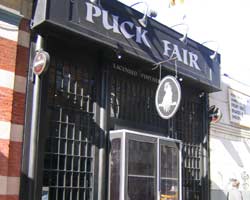 Let’s start off by saying that Puck Fair is not for the faint of heart. It’s not scary or seedy or anything, but gets so crowded on weekends that some have dubbed this “one of the most annoying fuckin’ places I’ve ever had the displeasure of being shoved around in.” While we certainly wouldn’t go that far, we would warn against coming here if you’re in the least bit stodgy and/or claustrophobic, anti-social, bunion-laden, small-bladdered, weak of heart or just pussy-ish. Not being any of these, Mr. Hipster actually enjoys Puck Fair’s soaring ceilings, winding nooks and crannies and overall friendly atmosphere. The bartenders are quick with a drink but a little heavy-handed with the volume on the stereo. When not packed, this place can be quite enjoyable and humane. The patrons are generally young, attractive and trendy–but not in a SoHo way–and the beer flows freely from several classy, brass taps. Let the nay-sayers have their way; TPK is going to continue to patronize this joint as long as there is a joint to patronize. [MF]