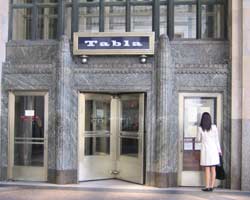 Let me just start off by saying we walked through the doors at this place pretty much completely bombed. Why the hell would you get drunk before going to an expensive restaurant, you may ask? Well, that wasn’t the intention, but after three Ketel Ones at the Gramercy Park Hotel Bar, what the hell are you going to do? In any case, don’t think for a minute that the booze influenced the review you are about to read… This is probably the best meal I’ve had in Manhattan. So you’re saying to yourself: what, this place is better than the fuckin’ Subway? Better than Wok and Roll? No way! Yes way! The joy starts off after walking into this bi-leveled, deco space. We were seated on the second floor along the railing, which looked over the main level. Our server was amazingly friendly, young and helpful. I must have been lit, as I ordered an $80 bottle of rose champagne. We told the waitress that it was our anniversary and they even brought us a couple of complimentary glasses. So much of the pricey food we’ve eaten has been very good, but not extraordinary. Tabla’s Indian tinged food brought our taste buds to a whole new level. Every bite was like an exploration into an exciting cave of flavor. There were curries and cumins and chili powders and pumpkin and all sorts of other stuff I have no idea the name of. The bread alone was worth the visit. As the night wore on, we not only became more intoxicated, but more happy with what we were eating and experiencing. Our dessert even included a “happy anniversary” written out in some sort of special dessert gel on the plate and the complimentary “from the kitchens” continued through the evening. The place was completely classy without being stuffy, inventive without being repulsive and thoroughly different than any other place I’ve ever eaten. I would suggest dropping by this Danny Meyer creation if you’re looking for something original, memorable and ultimately awesome. [MF]