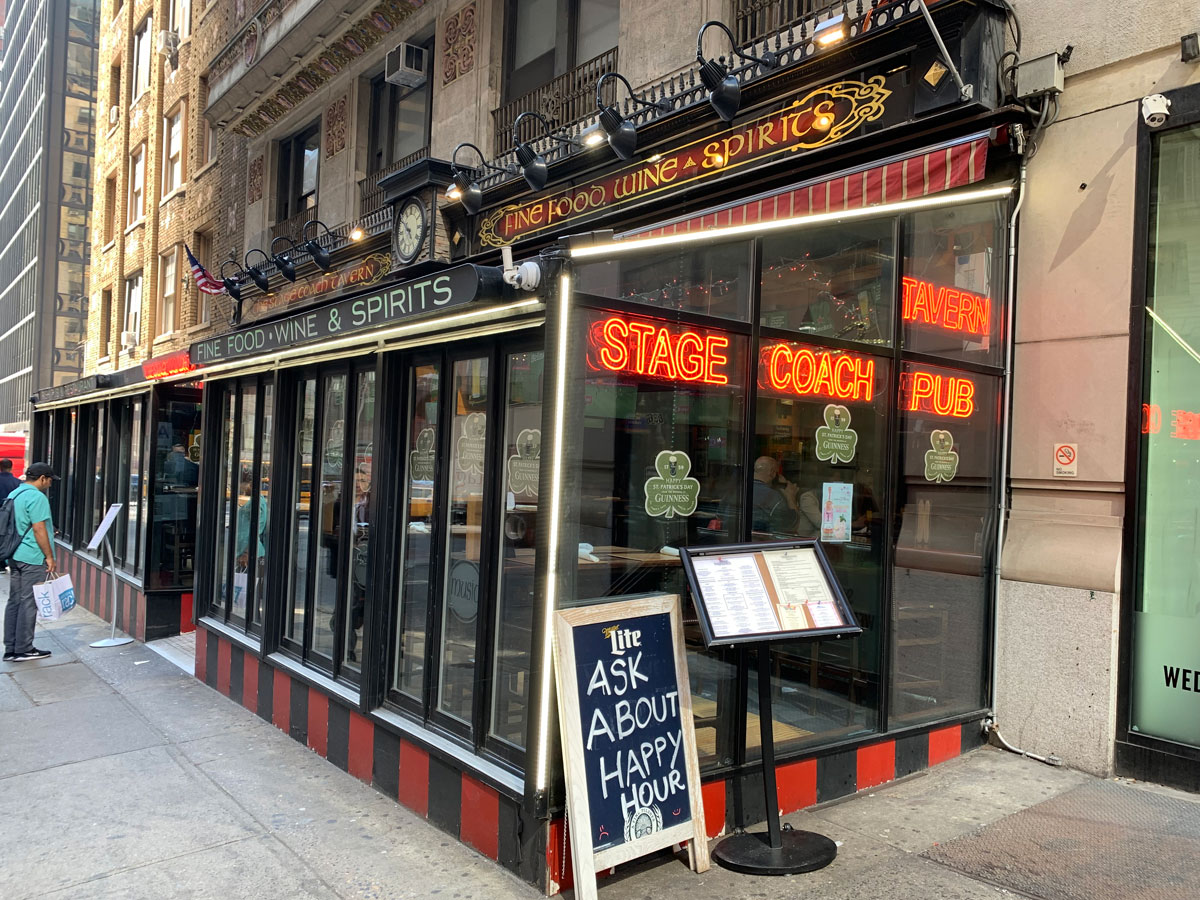 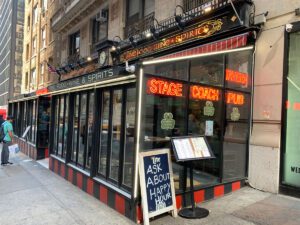 Once there was a place called Stage Deli. It was famous for its insanely huge pastrami sandwiches and for bilking tourists out of their hard-earned cash to eat said sandwiches. Well, in 2012 people apparently got wise to the ruse and how a four-pound pile of meat might stop your heart, so business dried up. And Stage Deli exited… stage left.

Enter The Stagecoach Tavern, which prior to its opening was marketed as a “high-end pub and restaurant” by the space’s new owner. What in reality came in is a generic, disjointed bar with some Irish overtones. A weirdly dark, somewhat empty bar/restaurant that may employ servers from Ireland, but might as well be a gnarly sports bar in Secaucus.

We sat at a high table in the weird front space that feels like what most people would think of as a green house, but to those of us who lived in the city for years, might remind you of the front window of your local bodega. Smudged with urban sludge and bird deposits, it, like all glass in NYC, is pretty much impossible to keep clean. It’s fine, honestly, but it does make you feel like you’re on display for every smack addict and German tourist strolling by.

The rest of the joint is pretty standard dark wood, twinkle lights and some Celtic symbols. Along with the requisite flat screens playing Yankee games and at least one oddball sport from Europe. The menu is typical bar grub, including nachos and chicken wings and the like. With burgers and a few sandwiches. Along with some Irish comfort food like fish and chips and the $19 shepherd’s pie. I went for the pie, which actually wasn’t too bad. But I was pretty damned starving, so hot beef and potatoes really couldn’t have ever gone wrong. Even if the spuds did suck some of the moisture out of my mouth.

All in all, the place was fine. Though it’s really a joint meant for tourists. But probably American tourists from the midwest or the south or wherever American tourists come from. Because I imagine Europeans might see through the gimmick. Although I suppose “Irish Pub” is no longer a gimmick in America, as it’s become more American than an actual Irish Pub in, say, Dublin. Whatever the case, you’ll most likely never come here unless you’re reading this in Nebraska. In which case, go somewhere cool. Leave the lame places for the olds.