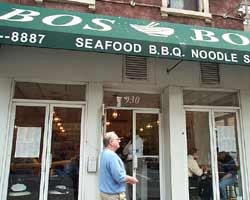 So now we know what that darned blonde Duke boy is up to: he’s given up his lawbreaking past and opened a Chinese seafood b.b.q. noodle shop in Hell’s Kitchen. He’s ingeniously left out the apostrophe, and named his restaurant BOS to throw off Boss Hogg and that annoying Sheriff Rosco P. Coltrane. Bo’s been boning up on his culinary skills since leaving Hazzard County, but he can’t fool us with his devil-may-care attitude and speed-demon mentality. Sure, the food is fast and cheap, but it definitely has a conveyor belt quality about it. Is it worth jumping in the General Lee and trailing half of the Southern police force behind you to get some of BOS sesame chicken? No. A walk up 8th Ave with the occasional OTB junkie asking for a quarter? Maybe, but only if you don’t have much cash, not much time and a hankerin’ for mediocre Chinese. Uncle Jesse would be proud–sorta. [MF]