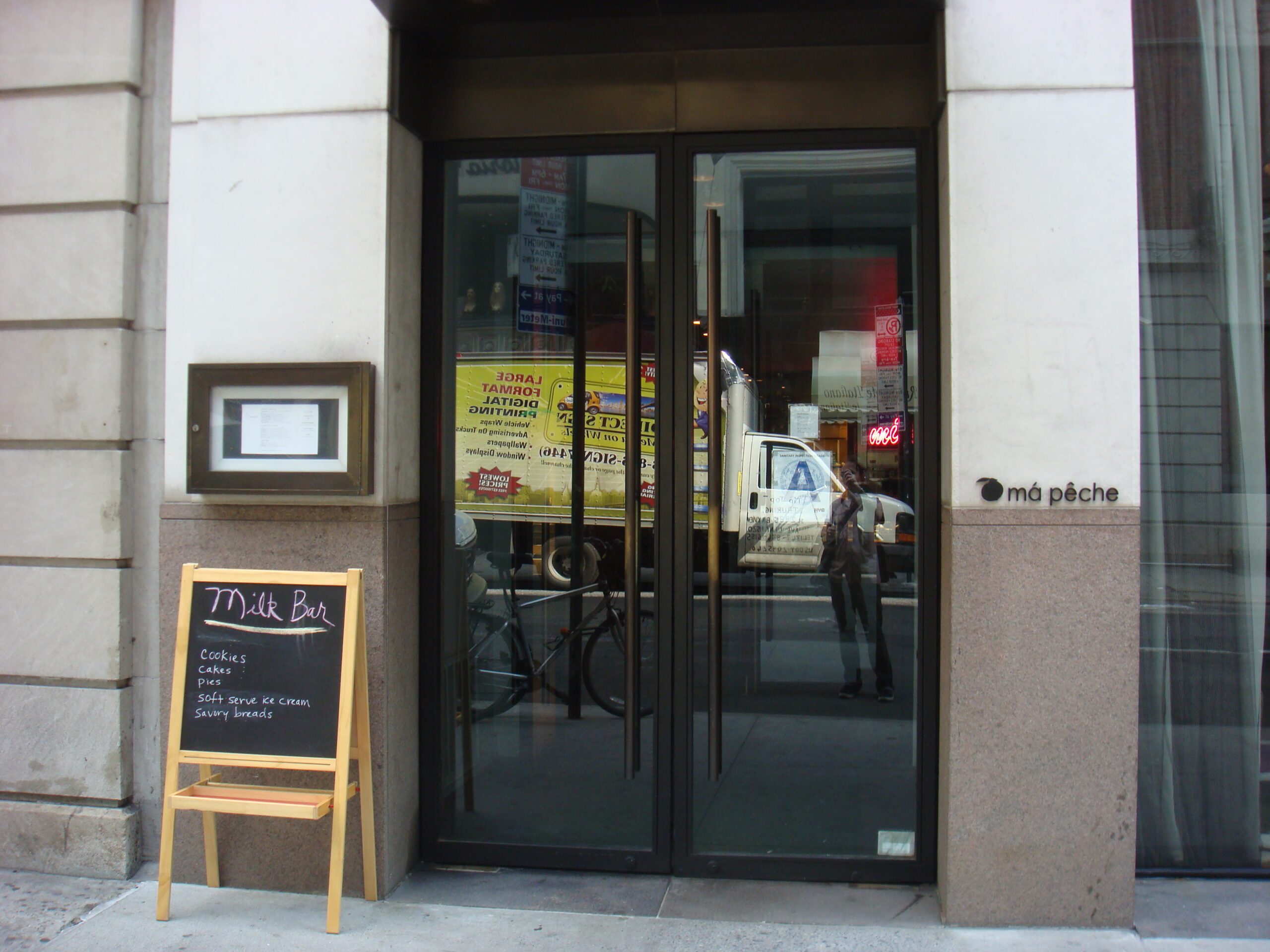 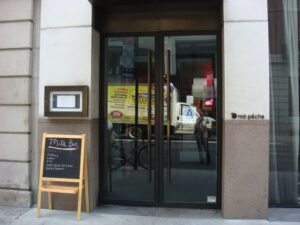 Apparently this dude David Chang is some sort of famous guy or something. Ok, famous in the world of people who like to eat pig parts and noodles and whatnot, but famous all the same. So it was with serious fame-whoring in my heart that we met a couple of friends at this bizarrely grain silo-ish space in Midtown Manhattan. Seriously, just imagine eating dinner at the bottom of a large, white grain silo decorated by West Elm and you have the space at Má Pêche. And apparently the West Elm shoppers only had like three pages of the catalog, and it was just the raw wood picnic tables at that! But somehow stripping away all the pretense and going sparse and starkly spotlighted works for the raucous attitude at what must be the hippest joint in an otherwise stodgy section of suitville. The whole vibe is loose and casual and communal and very loud. The waiters are jokey and familiar. This ain’t the fold-your-napkin-when-you-go-to-the-bathroom kind of place. Speaking of jokey, the long table directly next to us (all the tables sit in an askew, random lineup in the space) was filled with like every standup comedian you’ve ever seen on Comedy Central. It was a who’s who of dudes you know you know (and you know they’re funny), but have no clue what their names are. And as the night went on, they did what comics are want to do and tried in louder and louder voices to out do each other. Luckily we had already enjoyed several beverages from the lovely and varied cocktail and beer menu, so it just added to the party atmosphere. And that, even more than the food, is what I’ll remember. It was just a good-ass time. But the food too had its highlights. I had a soft shell crab appetizer, which is never bad. And then steak frites, which had rice sticks instead of real fries, which was decent but wholly unremarkable. And a butter poached cod that practically melted in your mouth. But the real star of the night was some sort of lettuce wrapped beef with shit in little cups that you sprinkle over it. Mostly Vietnamese, but with a hint of “other” in there, it was just a taste explosion. The beef involved in that dish was a little overcooked and tough, to be honest, but the other stuff involved made it sing anyway. We skipped desert and instead went right upstairs and scored a giant bag of Momofuko cookies and some ice cream at Momfuko Milk Bar. The ice cream was corn-flakes-in-milk flavored, and was a bit odd, but strangely addictive. The cookies were stupendous, and big, and I’m sure not highly caloric at all. All in all I’ve had better meals food-wise (though some of it was damn tasty), but there are few joints I’ve been to that have been as freeing and funky and shockingly weird at the same time. I suggest coming with a small group of good friends, putting away your inhibitions for a night and trying to party like a comedy superstar. [MF]