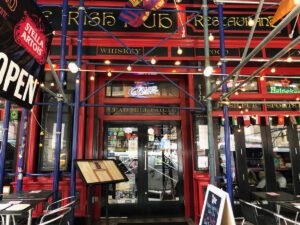 Well, it is Irish. We know this because we heard at least two U2 songs as we drank a couple pints while the sun was still shining and the Times Square crowd filtered past. We honestly just stopped in as a way to kill time before going to see a movie at the Ziegfeld. The person meeting us was late, so one Diet Coke turned into a pint, which turned into two. In retrospect, drinking three large glasses of liquid before a movie was probably a mistake. Planning a night out at this place would also be a mistake. We’ve been to Ireland. The bars in Ireland were loud and fun. This joint must represent the deadly quiet (aside from the U2), unfun part of Ireland we missed. Mrs. Hipster and I spent the first thirty seconds of our time here looking at the county maps of The Emerald Isle pointing out where ¼ of her family came from, another two minutes locating her family crest on the family crest poster and then another forty minutes watching the dust settle on some old dude at the bar. Finally the friend showed up, and we went to see a movie so horrendous that I almost wished I was back staring at the ratty picture of JFK on the wall and wondering how Bono has gotten away with that mullet for so long without anybody calling him out on it. [MF]