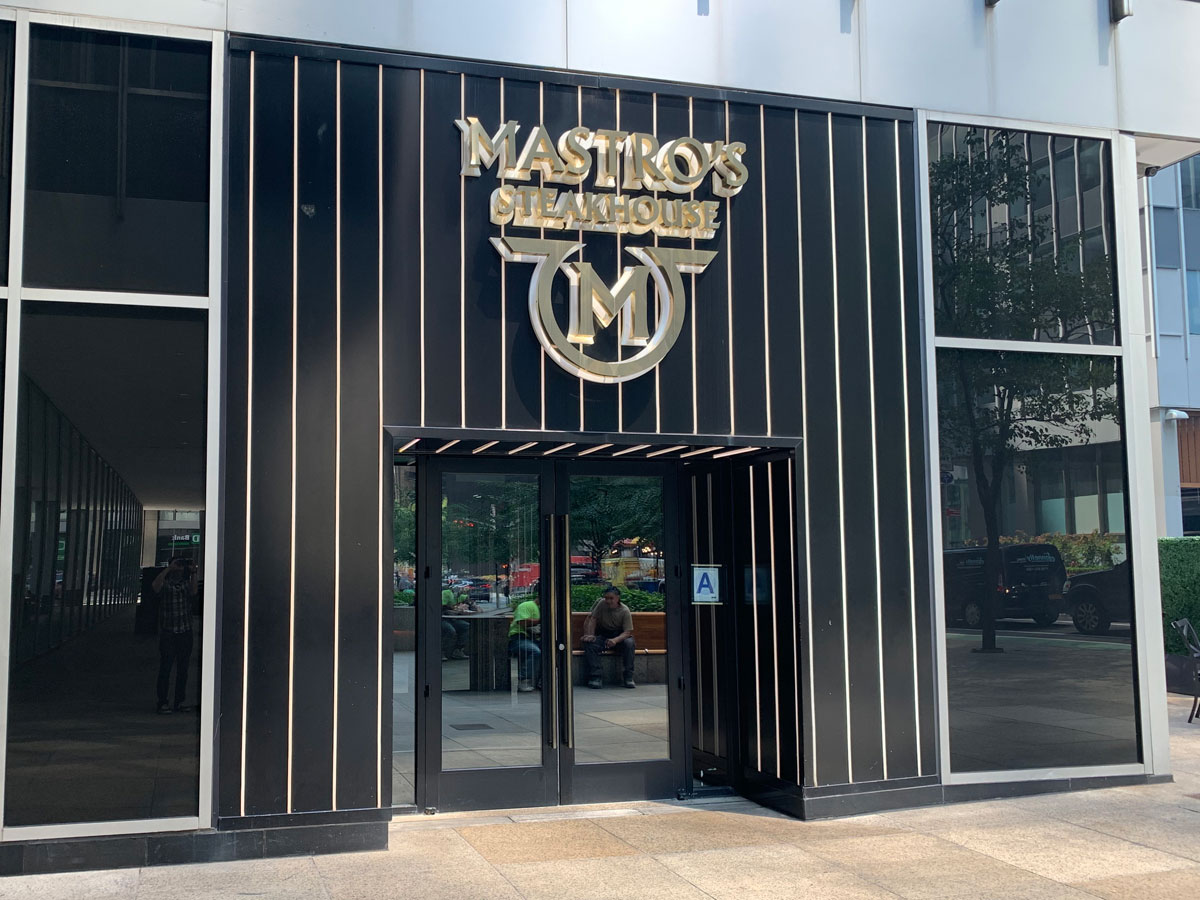 I’m always a little unclear who places like Mastro’s are for. They have all the subtlety of a mobster’s pin-stripped suit, and the style to match. The prices are hiked to the point that it seems they’re either trying to make it seem fancy, or just assume everyone in the joint is throwing down the corporate card. The latter being the only reason I was here. Boss money, am I right? Because I don’t sit down with my own cash for an un-special meal where the cheapest non-steak entrée is $45. For chicken!

Granted, said boss was hardly creative with his choice. In from Dallas, he decided that taking the elevator down five floors, exiting a lobby door and walking about seven feet to Mastro’s door was the choice we needed. I suppose you can’t argue with the commute, but dining at a restaurant that shares an interior wall with your office isn’t really “going out.” That’s to say this certainly wouldn’t have been my first choice of venues had we been consulted. Though I imagine that out-of-towners would definitely be impressed by the majesty of a high-ceilinged New Yawk steakhouse. Or so I thought… Because this is a 19-restaurant chain with such prestigious locations as Scottsdale, Fort Lauderdale, Costa Mesa and some place called The Woodlands, Texas. Which is apparently a “master-planned” community outside of Houston developed by an oil man in the 1970s. Sounds like pure class (and only a smidge insurrectionist). Point is, this place feels way more like a steakhouse that belongs in Vegas (where they do have a restaurant) than it does among the crowded and lauded landscape of famous New York City steakhouses. It feels like a tourist trap, even in Midtown, where you could walk a little and hit up somewhere classic like Keens.

Oh, so there was some food. From what I recall, the appetizers were the highlight. I had French onion soup, which is hard to mess up. My co-workers had some sort of bacon steak thing that I don’t eat. But they seemed to enjoy mawing on that pig. The steak was nothing special. It wasn’t like wedding steak bad, but it also wasn’t anything that blew me out of the water. Which, frankly, is hard to do with a steak. There are only so many ways to dry-age and season raw meat. And maybe it’s just me, but I feel like I only really remember steak when it’s accompanied by a sauce of some sort. A red wine reduction or other. Like an awesome steak frite, sliced and doused with something rich and/or buttery. Otherwise most NY strips are just a hunk of cow on a plate. You can tell when it’s not great, but it’s very hard to get to a place of distinction. And though Mastro’s hikes the prices and presents what you’d imagine a Houston’s in Miami might feel like, it does nothing to rise above just another Midtown steakhouse for suit dudes with a work Amex.