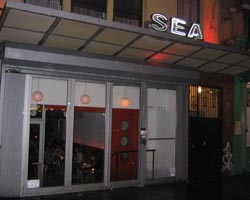 And this is why I don’t do delivery… While it may drive Mrs. Hipster completely insane–and somewhat limit the radius of our ordering prowess–I hate waiting forever for food, and having it be cold once it arrives kind of defeats the purpose of not just defrosting a Stouffer’s lasagna myself. I’d rather walk a few blocks to pick food up than depend on some dude on a bike to find my place, get there in a reasonable amount of time, and bring me the right order. Thai food seems particularly susceptible to the delivery curse. Have you ever tried to eat congealed Pad Thai? The stuff comes out of the aluminum tin in a giant brick, looking a little more like a wooden clog than a tasty Asian noodle dish. We literally had to call three times to check on our grub, and I actually ended up fighting our host’s dog for one of her leather shoes I was so damn hungry. Ooh, nothing like cold spring rolls. Honestly, I was torn when the food finally showed up. Half of me was convinced I was going to slam the place for making me wait so long, and the other half was so starving, I thought maybe it would be the best meal I had ever eaten. It turns out that I was both pissed and hungry and annoyed and unimpressed. Trying to look past the icicles in my duck sauce, I could see that the grub was pretty typical Thai cuisine, and not anything waiting hours to choke down in a fit of orgiastic gluttony. I must admit that the prices were actually pretty decent, and swinging by the restaurant itself, I was impressed with the funkiness of the place. Maybe I’ll give it a second chance and dine in–but not before giving the manager a piece of my mind–and a piece of my tooth that I broke on the ice cube that was supposed to be pad see yew. [MF]